Salisbury-Rowan Utilities already permitted for thousands of tons in sludge 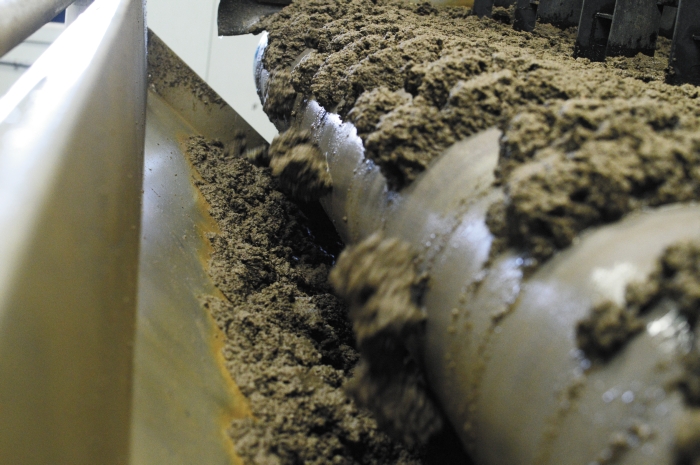 Sludge rolls off of a drum during the drying process at Salisbury Rowan Utilities' Grant Creek Wastewater Facility in Salisbury. Photo by Josh Bergeron, Salisbury Post.

Salisbury-Rowan Utilities is permitted for 1,441.9 acres.

Charlotte’s biosolids program dwarfs Salisbury’s financially. Charlotte’s biolsolid’s program pays millions annually to Synagro — a Baltimore-based company that specializes in waste recycling — but Salisbury’s entire residuals program has a budget of about $740,000. Behmer said Salisbury’s contract with Synagro is about $151,000 per year, which could vary based on how many tons of sludge are produced each year.

Behmer said the city’s current program, turned out to be the most cost-effective when compared to other options, such as hauling it to a landfill.

“I think it’s more of a sustainable product this way,” Behmer said. “I just think out of principle it’s better than sticking it in a landfill. There’s all kinds of requirements and one year we had a really wet Spring and we actually had to ship it to the landfill in Concord. It was at least twice as much to discard it that way.”

Salisbury-Rowan Utilities is permitted for 4,319 dry tons of sludge each year. In 2013, Behmer said his department only applied 1,492.94 dry tons.

Behmer said Salisbury-Rowan Utilities began recycling biosolids in the late 80s, initially applying it to city owned land near the wastewater facilities. Later, Salisbury began offering the sludge to farmers as a type of fertilizer. Behmer said he wasn’t sure of the exact date when sludge was first spread on farmland.

Oscho Deal, who primary farms cattle in Rowan County, said he was one of the first to receive Salisbury’s sludge and hasn’t seen any significant negative effects on his crops or livestock.

“At the time, nobody knew anything about it at all, we volunteered and were one of the first to get it,” Deal said. “One of the major things is that it’s helped financially.”

Rather than purchase fertilizer for a farm, Deal and other farmers receive the sludge for free.

“We pay based on weight, so our goal is to get as much liquid out as we can,” he said.

In his 14 years with Salisbury-Rowan Utilities Behmer said his department hasn’t received a significant number of complaints about the land application program.

Testing conducted and contaminants left in sludge is major concern among opponents of Charlotte’s pending application.

Sonja Basinger, Salisbury-Rowan Utilities environmental services manager, said staff at the Grant Creek facility test every two hours and regularly pull samples from a device inserted into the stream of water coming into the plant.

A list provided by Basinger shows 16 different inorganic materials that Salisbury-Rowan Utilities tests for and 10 types of metals. Behmer said Salisbury-Rowan also sends off samples to an outside testing facility for materials it doesn’t test for in house.