Commission approves pay increases for sheriff, board of education 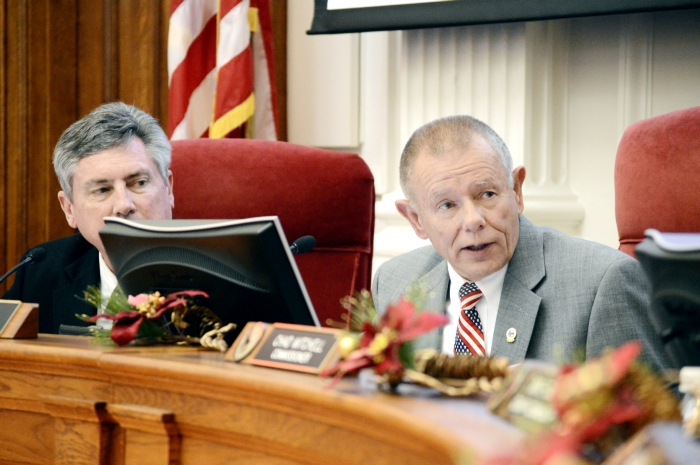 In the last full meeting under the current crew of county commissioners, Sheriff Kevin Auten and school board members received small pay boosts.

The Rowan County Board of Commissioners approved $150-a-month boost for all board of education members and a $5,734.70 annual pay boost for Sheriff Kevin Auten, who was re-elected earlier this month. The chairman of the board of education will continue to receive the same $100 stipend.

Commission Vice Chairman Craig Pierce, who drafted the board of education pay boost proposal, talked about the mediation process that commissioners and the school board went through last year. That was why he wanted the current group of commissioners to approve the increase rather than wait until December, when three new commissioners begin terms.

“I wanted this board to be the ones to approve that because we were the ones that were in negotiations with them,” Pierce said. “There’s no ax to grind with those guys.”

Any board of education member appointed to the Joint Planning Committee or Appeals Committee would earn an additional $25 stipend per meeting, according to Pierce’s proposal.

The approved proposal adds slightly less in expenses than the previous board’s proposal. The earlier proposal would have added $200 to the school board chairman’s stipend.

Referring to the 2012 proposal’s approval, Pierce said ongoing mediation may have played a factor in not approving school board pay raises.

“That to me was a signal that the commission should have looked at it, but like I said we were all caught up in the legal proceedings,” Pierce said about the failure to approve the increase previously. “To say it in a nice way, it’s kind of hard to reward the guy that you’re taking to court. I wanted to wait until we had that issue resolved and then we could come forward.”

Commissioners-elect Greg Edds and Judy Klusman, who attended Monday’s commission meeting, said they didn’t have a problem with pay raise occurring before their terms started.

Auten’s increase came after a short closed session meeting, while the board of education increase was talked about during the open portion of the meeting.

County boards of commissioners are granted the authority by state law to set the salary of elected officers such as the sheriff. Commission Chairman Jim Sides said Auten’s performance in office was a reason for the commission approving the increase.

“He’s been a very frugal sheriff with county,” Sides said. “And he proved himself by being re-elected.”

The board of education’s increase will take effect in January. Sides said Auten’s pay increase would take effect whenever he takes his oath of office, officially beginning a new term.

The commissioners also discussed the Rowan County Register of Deeds’ salary during the closed session, but left the salary identical to incumbent Harry Welch at $58,040. John Brindle has been elected to succeed him.