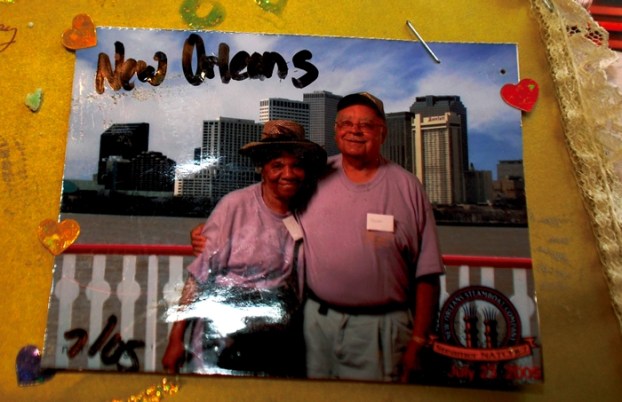 Wineka column: The love story of Marvin and Julia

SALISBURY — Marvin Wood and Julia Slade first took notice of each other as they passed in the halls between classes at Dunbar High School in East Spencer. Julia wondered who the good-looking boy was.

“I wondered the same thing about her,” Marvin says.

Their initial spark caught fire, and the couple courted  for two-and-a-half years as Marvin finished up high school and Julia, who was two years older, attended N.C. A&T in Greensboro. They wrote each other constantly.

“It seemed like I would get a letter every other day,” Julia says, remembering how stamps cost only 3 cents back then. On Nov. 26, 1944, the couple wed and come Nov. 29, they will celebrate their 70th anniversary at the Geneva Oglesby Center in Granite Quarry. About 90 friends and family will be attending the event, which includes dinner and a deejay.

The couple are devout Jehovah Witnesses, and Marvin calls out a Bible passage that says, paraphrased, if a man finds a good woman, he’s got a tremendous thing.

“That’s the way she’s always been for me,” Marvin says. “People say, ‘I couldn’t have done it without you,’ and that’s the way I feel.”

Julia describes Marvin as a kind person, always caring for others. Through his life, he provided for his family, Julia says, and as a husband has helped inside and outside the home. There has been a lot of love between them, Julia adds.

“Together, we did it,” Marvin says. “I don’t think I could have anyone else like her.”

Marvin also holds a special place of respect for his wife because of how she treated his father, Howard, who went blind from glaucoma in the mid 1940s and lived with the couple and their family until he died in 1972.

“My wife took care of him like he was her father,” Marvin says. “That’s something I will never forget.”

The couple says they have had few arguments over these seven decades. If they had disputes about anything, it was probably over their children. It wasn’t about money, Julia laughs, because they didn’t have any.

The couple believe any marriage has to have some give and take and also an acknowledgement that neither person is perfect. “I think the secret was caring for one another,” Julia says.

Julia Slade Wood, 90, comes from a big family of eight children. She grew up in East Spencer, where her father had a store, but he also had a good job as a brakeman for Southern Railway. Her mother was a domestic worker, something Julia also would do for families in Salisbury. While she was still a high-schooler, the job only paid 50 cents a day, she recalls.

In later years, Julia also worked as an agent for Winston-Salem Mutual Life Insurance, which had a Salisbury office on Lee Street.

Marvin Wood, 88,  grew up in northern Salisbury not far from East Spencer. Until he went blind, his dad was a brick mason, and his mother also was a domestic worker.

When he and Julia married in 1944, Marvin and his father already had started building a house where they all would live, and Marvin had landed a Southern Railway job cleaning steam engines at Spencer Shops earning 44 cents an hour. His mother had to sign for him to work because he was only 17.

“I figured that was one of the best jobs I could get,” Marvin says.

Julia says Marvin, always wearing bib overalls, was pretty greasy when he came home.  As years went by, he would man several different jobs at the Shops and later at Linwood Yard until retiring with 42 years of service. The company gave him a watch and a “right nice” retirement party in the master mechanic’s office , Wood says.

Over the years, Marvin and friends also built houses that became rental properties, and when times were slow at the rail yard, he was able to drive truck for Isenhour Brick without losing his insurance with Southern.

Marvin is particularly proud, too, of building two freedom halls for the Jehovah Witness and serving on the Rowan County Housing Authority board of directors.

After Howard Wood went blind, the family established a little store on Short Street next to their stucco and brick house. Amazingly independent, Howard Wood manned the store, often opened and closed it and was adept at making change by feeling the different coins. A lot of trust was involved with neighborhood customers, too.

“I don’t know how he did it,” Marvin Wood says.

Marvin and Julia raised a family of five: Rosalind, Marvin Jr., Constance, Deborah and Darrell. The most difficult times they’ve had to live through together were when they lost Marvin Jr. in a car accident on Long Street in 1965 and daughter Constance to cancer earlier this year.

The happier times usually have involved travel. Marvin and Julia have been on tours or on their own to places such as Hawaii, the Bahamas, Greece, Rome, England, Canada, the Grand Canyon and Disney World several times. They also enjoyed heading for the ocean during the summers.

At home, they tended large vegetable gardens every year.  They used to have a big above-ground swimming pool, and Marvin built a sizable garage for when he was in the construction business.

They added on and remodeled the Short Street house over the years, When they first moved into the stucco-and-brick house in the 1940s, they lived on a dirt street, and the city hadn’t yet extended any sewer lines . “I know what hard times are,” Marvin says.

The family has always celebrated the milestone anniversaries of Marvin and Julia Wood, and the photographs are around to prove it. Their 50th anniversary in 1994 was held at the Salisbury Civic Center, and about 300 people attended.

Today, Marvin and Julia keep doing their missionary work, and both of them are still driving, so they run some errands and visit family. Marvin tends to a little patch of collards and greens in the backyard, and he has converted a two-car garage attached to the house into a place for family gatherings.

When they look back, the Woods think the reason they’ve found happiness over 70 years is simple.

“We’ve enjoyed being together,” Marvin says.

1. Cheerwine has introduced a new, limited-edition soft drink. What is it called? A. Ever Cheer B. Cheers to You... read more