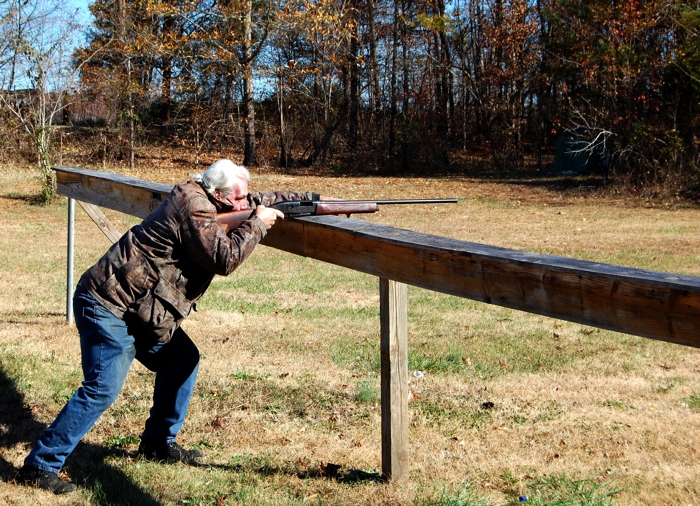 Michael Johnson aims before firing during the fall Turkey Shoot at AmVets Post 460.

The bright sunshine reaching over the treetops and a fire in a rusty oil drum provided some warmth for the half-dozen people who braved the low temperatures, which were in the mid-30s, to support the American Veterans organization.

No turkeys were shot. Instead, each shooter pays $3 or $4 a round to fire one shot at a target. Whoever is closest to the center of their target wins the round.

Occasionally a measurement is needed to determine the winner.

Winners receives a piece of meat — like ham or sausage — or a percentage of the total cash pot for the round. The rest of the money goes to fund Post 460.

This year, Turkey Shoots have been held each Saturday at Post 460, located at 285 Lakeside Dr. off Goodman Lake Road, since the end of August. They run through Thanksgiving.

Michael Johnson, of Salisbury, said his father brought him to the Turkey Shoots when he was a teenager. Before this year, he said, it’d been 30 years since his last Turkey Shoot. Bean measures to find which shot was closer to the bullseye during the fall Turkery Shoot.

Bean said he was based on a ship in the Mediterranean Sea off the coast of Libya in October 1962 when the Cuban Missile Crisis developed. His ship sailed for Cuba and then back to the Mediterranean after the crisis was abated. Later, Bean and the rest of the ship’s crew went through the Suez Canal on their way to the South Pacific.

Bean, who was assigned to a helicopter outfit, ended up in Vietnam as a military adviser. He’s been the commander at Post 460 for two years.

Smoke rises from the barrel of William Lambert’s gun after he fires a shot during the fall Turkey Shoot at AmVets Post 460 Saturday.