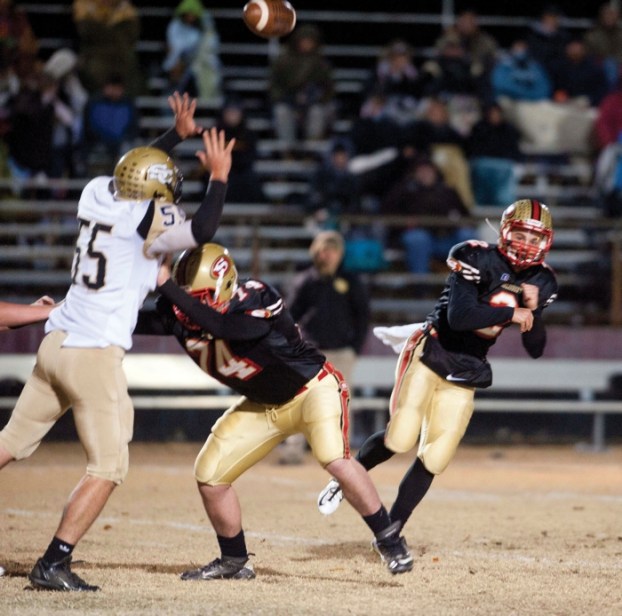 The Salisbury Hornets advanced Friday night to round two of the State 2A playoffs because of give and take. Their offense capitalized on what Surry Central gave them while the Hornet defense just took and took.

Salisbury (6-6) held off the visiting Golden Eagles last night at Ludwig Stadium 14-10, thanks to a strong defensive effort and an unexpectedly prolific passing game. The Hornet defense pounced on three fumbles, notched five sacks and made a couple of goal line stands to stymie Surry Central (7-5) with the game in the balance. Fittingly the game turned the Hornet’s way for good late in the first half on a big special teams takeaway.

Just over a minute was left in the first half, tied 7-7, with the  Hornets backed up to their one. They punted and Surry Central’s Chandler Johnson gathered it in at the 36. He reached the 30 but suddenly Salisbury’s Darius Jackson was sprinting the other way with the ball enroute to a 70 yard fumble return. It was more of a snatch and run as Jackson simply yanked the ball away  from Johnson and ran to daylight for a 14-7 Hornet lead.

“I just saw an opportunity and took advantage of it,” Jackson said of his decisive takeaway. ” A lot of games in the playoffs are decided by special teams so we had to make sure we covered everything.”

At the same time with their running game faltering, quarterback Riley Myers connected on 16 of 21 passes for a season high 232 yards. “That is the most we have thrown the ball since the first game of the season, ” Myers said. “But that is what they gave us and there were holes in the defense that we had to figure out.” Will Steinman grabbed 10 throws for 145 yards while Ryan Jones caught 5 for 74 yards.

“They were blitzing so much to take away our running game that it left other things open,” Salisbury Coach Ryan Crowder said. ” Steinman and Jones made the big plays and Riley threw well under some pressure.”

Two screen passes totaling 37 yards to Jones on the opening drive of the night led to an early 7-0 Salisbury lead. Antwond Glenn’s one yard run capped a 58 yard drive. The Hornets seemed poise to strike again but fumbled it away at the Golden Eagle 10. Three plays later, Surry had tied it 7-7 as halfback Alex Martin  broke free off right tackle and outraced the defense 84 yards. Martin had 170 yards for the game but only managed two net yards in the second half against the stour Hornet defense.

The Eagles were ready to take the lead midway in the second quarter with first at goal at the three but four straight runs up the middle were stuffed by the Hornet defense at the one. Although it was in the first half, the stand proved critical in the long run.,

“Surry Central has some great athletes and we knew they were a good team,” said linebacker Donnell Alexander who had four sacks and a fumble recovery to lead the defense. “We just had to step it up and play hard every play.”

The Golden Eagles took the second half kickoff all the way to the Hornet 6 but were pushed back again and had to settle for a 31 yard Oriel Secundino field goal. Salisbury tried to ice the game in the fourth when Myers first hit Steinman for a 17 yard score then Jones for a 3 yard TD. But both times the touchdowns were called back for holding. Surry had one last shot and drove the ball out to midfield but ran out of time.

The eighth seeded Hornets now travel to Swannanoa next Friday to face top seeded and unbeaten C.D. Owen High. “At this time of year there are no ugly wins,” Crowder said. “When the playoffs roll around you just have to win or go home.”

It’s Round 1 of the playoffs. We at the Salisbury Post will do our best to keep readers updated with... read more