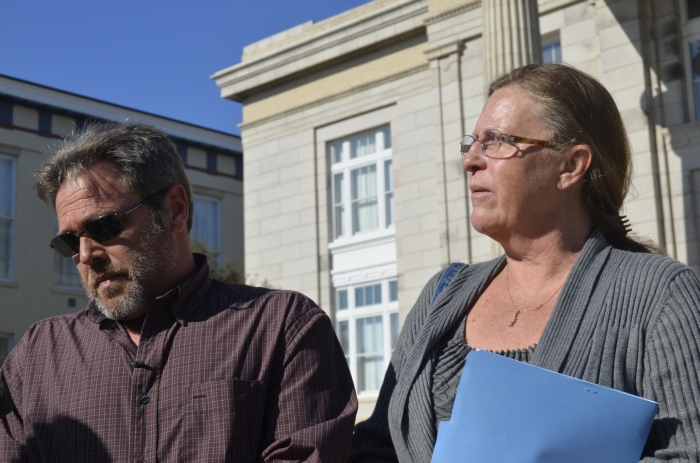 Carl and Karen Haussmann speak to media briefly following a Wednesday probable cause hearing for a man accused of shooting their dog, Jake. Shavonne Potts/Salisbury Post

A probable cause hearing set for Wednesday was continued until next month for a Faith man accused of shooting and subsequently paralyzing, Jake, a 3-year-old hound dog.

Eric Hillard, 47, faces a felony animal cruelty charge after authorities said he shot the blue-eyed hound mix in February. The dog was inside a fenced-in area behind the Stone Pointe Drive property of his owners, Carl and Karen Haussmann.

The Haussmanns say there could be some unknown technology available to help Jake walk, but for now he remains paralyzed from the chest down. The family has paid an estimated $12,000 on veterinarian visits, lab tests, medications and other items they use to care for the dog.

Karen and her husband have placed an absorbent pad over the dog’s bed and  also infant diapers. Karen said she evacuates Jake’s bladder a couple of times a day and makes sure he’s clean.

The couple placed a sign at the end of their driveway offering a reward for information that led to the arrest and conviction of the person who shot Jake. The sign was stolen and the couple eventually began placing signs in downtown Faith and passed out 500 flyers throughout the community to spread the word.

The Granite Quarry-Faith Joint Police Authority charged Hillard Oct. 22, and the Haussmanns believe the reward is what led to Hillard’s arrest.

The Haussmanns say they hope he’s found guilty so they can receive “justice for Jake.” The couple also hope Hillard will be prosecuted under “Susie’s Law” — named for a dog that was beaten and set on fire by her owner’s boyfriend.  The dog received burns on 60 percent of her body. Susie has since recovered, been adopted and is now a therapy dog.

If Hillard is prosecuted under Susie’s Law, it could mean an active sentence of up to 10 months in jail. If he’s convicted it will likely be the first time the law has been applied in Rowan County.

Hillard, who was present at the hearing, was initially represented by Salisbury’s Bill Cameron, but he was replaced after it was determined the attorney had a conflict. Cameron told District Court Judge Charlie Brown he’s previously represented one of the witnesses. Brown appointed Salisbury attorney Doug Smith to represent Hillard.

Salisbury attorney Reid Acree, an animal rights advocate, represents the Haussmanns, he said, as the case moves forward. The couple will likely file a civil lawsuit for damages following the criminal matter. Acree is also a board member of Faithful Friends Animal Sanctuary.

Acree sent a letter to Rowan District Attorney Brandy Cook asking that the case be prosecuted to the full extent of the law.

“We are seeking justice for our dog. It was the most horrendous, horrible act of animal cruelty that’s actually happened to our family,” Carl Haussmannn said Wednesday after court.

“He needs to understand that no matter what they put upon him as punishment for this will not compare to what we will go through and what Jake will go through for the rest of his life,” Karen Haussmann said.

The couple say Jake is happy, but they know he’d rather be running around with their other three dogs.

Jake often looks around, Karen said, as if he’s trying to figure out why his hind legs don’t move like they once did.

They bought a dog walker, but Jake does not like it, Karen said. They’ve begun placing him in a children’s wheelchair but he tires easily after walking on his front legs for a few minutes.

“We’ve had animals all our lives and as soon as they come into the house they are certainly a part of the family, and that’s the way we treat them,” Carl said.

The hearing will now take place Dec. 17 in district court. The Haussmanns have created a Facebook page, Who Shot Jake, where they’ve provided updates about Jake, as well as videos and pictures.

Coltrain will not request recount in commissioner race