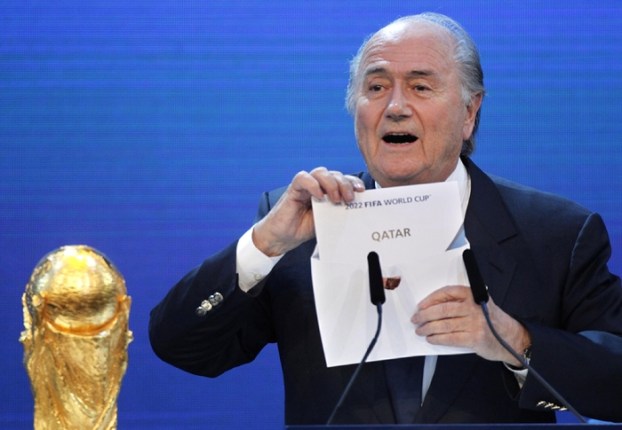 FILE - In this Thursday, Dec.2, 2010 file photo FIFA President Sepp Blatter announces Qatar to host the 2022 soccer World Cup in Zurich, Switzerland. FIFA has cleared Russia and Qatar of any wrongdoing in their winning bids for the next two World Cups. (AP Photo/Michael Probst)

1. HOW THE GOVERNMENT IS PATROLLING HALF THE MEXICAN BORDER

An AP Exclusive report finds that the U.S. uses drones solely to monitor desolate ranges of the frontier with Mexico where there are no agents or fences.

Two years after his historic visit to the reborn nation, the president will warn of a backslide in its march toward achieving freedoms and equality.

While the summit of industrialized and developing economies is putting Brisbane on the global political map, the Australian city’s locals aren’t too excited about hosting it.

A FIFA judge exonerates the hosts of the next two World Cup tournaments four years after a scandal-plagued committee voted on their bids.

Hundreds of Turkish Kurds are monitoring the area to prevent Islamic State fighters from crossing to fight in the besieged town of Kobani in Syria.

The House is virtually certain to approve the project Thursday. And a Louisiana senator says she has the votes to pass it in the Senate next week.

It is unclear if the design of the tallest skyscraper in America complicates window-washing work which may have led to the flipping of the scaffold.

8. UBER RUNS INTO OPPOSITION IN PHILADELPHIA

The city’s authorities are calling the ride sharing company a “hack” taxi service, and have impounded 15 vehicles belonging to its drivers.

9. WHO’S PREDICTING CHEAPER GAS IN US

The Energy Department says in a forecast that drivers will pay $2.94 a gallon on average in 2015, 45 cents lower than this year.

Cleveland’s Corey Kluber wins the AL Cy Young Award, while the Dodgers’ Clayton Kershaw is a unanimous winner in the NL voting.

Here are the deeds from the Rowan County Register of Deeds Office for the period ending Oct. 15, 2014. Atwell... read more