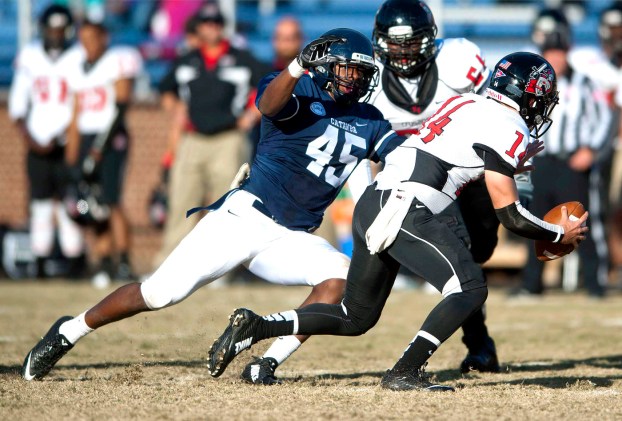 As a Decatur Bulldog, on the outskirts of Atlanta, Kitchens played in a tough league against tough people.

“We went 7-3 one year but never made the playoffs,” Kitchens said. “I played against some guys that are in the SEC now.”

Kitchens mentioned LSU’s 6-foot-6, 340-pound tackle  Vadal Alexander and Alabama’s 6-foot-4 linebacker Dillon Lee as two of the men he played against. Kitchens more than held his own. He had 11 sacks one season. He was an All-State performer and made the Atlanta Journal-Constitution’s all-region team.

Catawba got involved with Kitchens late in the recruiting process. He got attention from Division I schools such as South Alabama and Arkansas State, but his destination was still uncertain as the winter days counted down toward February’s National Signing Day.

“We got a call from Kyle’s high school coach,” Catawba head coach Curtis Walker said. “He was a very good student, a great young man, and he sounded like exactly the body type we were looking for at outside linebacker. (Defensive backs coach) Chris Collins went down there to see him up close.”

Kitchens, not surprisingly for a kid who grew up in the shadow of the Georgia Dome, had never heard of the South Atlantic Conference or Catawba or the city of Salisbury until Collins started singing the praises of the D-II school.

“Coach Collins came to my high school and wanted me to visit  Catawba and not long after that I got my stuff and came up here to take a look,” Kitchens said. “There was a lot to do in Atlanta all the time, and Catawba was small, but I liked it as soon as I saw it.

“Everybody noticed me and was nice to me right from the start. I  met all kinds of different people and I liked that. It was a chance to explore North Carolina, and I felt like this was the right place.”

Walker and his staff figured Kitchens was good enough to be a role player as a true freshman. He has the height (6-foot-2) the Indians like at outside linebacker, a position Catawba is willing to trade bulk for  quickness, and at 205 pounds, Kitchens has 4.6-second speed in the 40-yard dash.

“I was mostly a pass-rusher in high school, so that part of the game was already pretty common to me,” Kitchens said. “But I had a lot to learn in college as far as dropping into pass coverage.”

While the Indians wanted to bring Kitchens along at a much slower pace, he was forced into the fire in Week 3 by a rash of injuries to the linebacking corps.

“The first game I played was at Newberry,” Kitchens said.

Kitchens had a sack in that dramatic road win and became a starter the following week. His biggest play was against Carson-Newman when he forced and recovered a fumble on the same play.

He has 45 tackles and his sack total is up to five now. He’s also produced sacks against Wingate, UNC Pembroke, Brevard and North Greenville.

North Greenville faced a third-and-10 at midfield on the final play of the third quarter. A sack for a 13-yard loss by Kitchens forced a punt.

“Our defensive line got pressure  on that play,” Kitchens said. “Their quarterback (Nelson Hughes) was quick, but he just kind of rolled to his left and right into me.”

Kitchens also contributed on special teams and had a tackle on a North Greenville punt return.

“He’s had to step in there quickly due to some injuries and some personnel losses,” Walker said. “We didn’t know he’d be a full-time starter as a freshman, but he’s  grown with every game.”

Lenoir-Rhyne runs the triple option with precision. They remind Kitchens of St. Pius, one of the elite teams he faced in high school.

“Lenoir-Rhyne runs the option well and they run it very fast,” Kitchens said. “But one thing I learned from playing against strong teams in high school is that anyone can be beat.