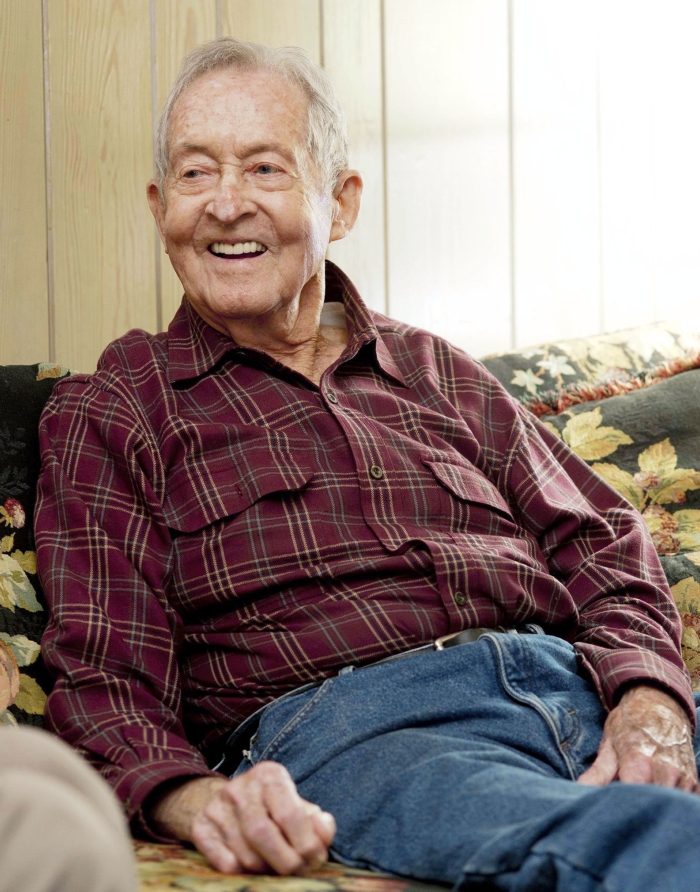 ROCKWELL — Most mornings, 90-year-old Will Lombard drives over to Crescent Pharmacy — the business he operated for 50 years — and helps owner Shelly Batts with the pricing and ordering. It keeps him busy, and this Veterans Day will be like most every other day, when Lombard downplays his contribution to U.S. Naval forces in World War II.

He was a young, barely-out-of-high-school hospital corpsman back then — the Navy’s equivalent of an Army medic. Lombard likes to say he was a bedpan jockey.

But he was a bedpan jockey with a front-row seat of the Allied Forces’ D-Day invasion at Normandy. About 12 hours after the initial assault on June 6, 1944, Lombard’s boat, LST-288, anchored about 2,000 yards off Omaha Beach. She had come to the fight carrying 425 soldiers and 116 vehicles, part of 4,000 ships and landing craft assembled for that historic invasion.

“There were a bunch of ships out there,” Lombard says with a laugh.

Lombard and his fellow crew members were thankful when a heavy cruiser, the USS Augusta, knocked out a German gun whose sights were trained on their LST. At first, LST-288’s assignment was to reinforce the beachheads established by the first wave of troops. Then, as it depended on the tides for the shuttles of casualties coming to it, Lombard’s LST became a floating hospital.

And he was busy. Lombard went from soldier to soldier, trying to make them as comfortable as possible and lending what treatment he could. Some of the wounded men were Germans.

By June 8, all of LST-288’s soldiers and equipment were on shore, and it became part of a large convoy of ships carrying the casualties to hospitals in England. LST-288 made seven trips across the English Channel in the four weeks immediately after the invasion. During those journeys, it transported 1,534 men and 627 vehicles from England to France and, on the return trips, carried 601 wounded men to Falmouth, England.

Lombard eventually was transferred to the USS Augusta, which was the transport ship for Lt. Gen. Omar Bradley during the Normandy campaign. At times during the war, it also carried President Franklin D. Roosevelt, British Prime Minister Winston Churchill and President Harry S. Truman.

The Augusta sailed for the Mediterranean Sea by July 1, 1944, and in August participated in Operation Dragoon along the coast of Southern France.

Lombard served out the war on the Augusta, and it was mostly uneventful, he will tell you. The best advice he ever followed, Lombard says, was that of an uncle who served in World War I. The uncle told him to choose the Navy when he was drafted and join the Hospital Corps.

Most people in Rockwell know Will Lombard, who graduated from Rockwell High in 1943. After the war, he returned to Rockwell, where his sister Elizabeth and brother-in-law, Dr. J.A. Oliver, were doctors. For some reason, Will went to work for a funeral home in Midland (Cabarrus County) and then attended embalming school in Nashville, Tenn.

It was in Midland, while living above the funeral home, that Lombard met his wife, Mary Gibson Widenhouse, a Concord girl. Maybe it was Mary’s influence, but Will gave up his career aspirations as a funeral home director and decided to attend pharmacy school at the University of South Carolina in Columbia.

Lombard became a licensed pharmacist by 1957, and a pharmacy owner back in Rockwell with Mary by 1959. Crescent Pharmacy started in the stone house next to today’s Ace Tire and across from Variety Produce.

The Lombards and Drs. Lombard and Oliver worked out of that location until 1982, when they built new offices and a new Crescent Pharmacy at the present location. Until she died, Mary handled most of the pharmacy’s business affairs. Meanwhile, the couple also raised four children: Ann (Goodman), William, Libby (Dunn) and Lewis.

In 2010, Lombard decided to sell the pharmacy to Batts. In 2012, at the age of 88, he finally gave up his license as a pharmacist but not the routine of going to work everyday.

You might not know it, but Will Lombard is a mountain boy at heart. One of seven children, he was born at the foot of Whiteside Mountain in Jackson County, where his father farmed and did some carpentry work. His mother was a school teacher.

The family stayed close to the Blue Ridge Mountains but moved to Wallhalla, S.C., when Will was about 4. He moved to Rockwell for his final year in high school to be with his sister and their parents.

“Then I went to Uncle Sam’s high school for a couple of years,” Lombard said, again with a laugh.

After graduating from Rockwell School, Lombard took his Naval basic training in Bainbridge, Md., and he also went to Hospital Corps school in Maryland. His first trip across the ocean in LST-288 was a rough one for Lombard and most of the other men on the vessel, as they roiled up and down with the rough seas of the North Atlantic.

Lombard guesses 90 percent of the men in the flat-bottom boat were seasick. The LST left from Boston in March 1944, stopped in Halifax, Nova Scotia, and departed for England March 14, reaching Plymouth by March 31.

During April and May 1944, LST-288 prepared for what was called “Operation Overlord.” Everybody, including the Germans knew an Allied invasion was coming, Lombard says. The question was just when and where.

“It was pretty well-organized, to be as universal as it was,” Lombard says, looking back at the monstrous invasion.

About 10 years ago, Lombard and son William made a trip back to France, starting with Paris, then hitting Normandy, the coast of Southern France and North Africa.

“It was pretty nice,” Lombard said.

And that’s about all you’ll hear of that trip for now.