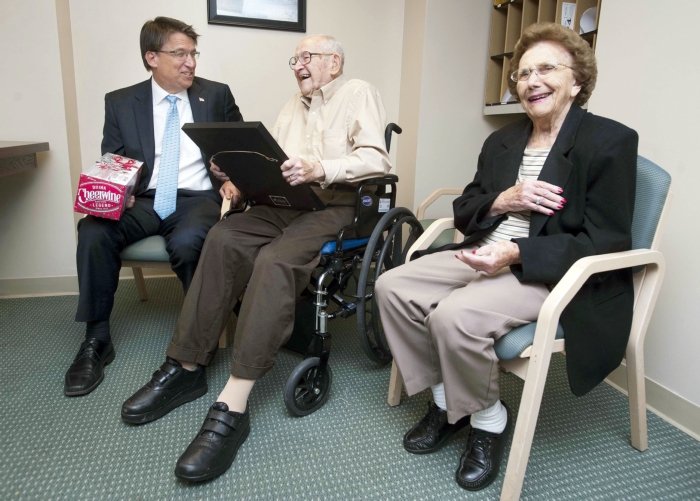 JON C. LAKEY / SALISBURY POST North Carolina Governor Pat McCrory was at the North Carolina Veterans Home in Salisbury to celebrate the 239th birthday of the US Marine Corps and unveiled the new initiative NC4Vets. The governor also visited with 103-year-old veteran Claude Lyerly and his wife Pauline and three sons. McCrory presented Lyerly with the state's highest civilian honor, the Order of the Long Leaf Pine.

Claude Lyerly turned 103 last week, but his sense of humor is as young as ever.

Lyerly and his wife, Pauline, were honored by Gov. Pat McCrory Monday at the North Carolina State Veterans Home. McCrory presented Claude with the Order of the Long Leaf Pine, the state’s most prestigious civilian award. McCrory also gave Claude and Pauline each a coin of excellence.

Claude, who grew up in Granite Quarry, served in the 81st Division of the U.S. Army during World War II. But, because of an eye disorder, he never made it out of the States and was discharged in 1944. For years, he owned and operated the Fifty-Fifty grocery store that his father opened on East Bank Street in 1932.

McCrory wished Claude a happy birthday, which was Nov. 4. He also wished the couple a happy anniversary, Claude and Pauline, who is 93 and retired from the county’s school system, celebrated 74 years together in late October.

“Seventy-four years with this guy?” McCrory asked Pauline jokingly, which got a laugh out of Claude.

Claude said the whole event was a surprise to him, and that he had just found out that morning he would be meeting the governor.

While waiting for the governor to arrive, he joked around with his three sons, Brantley, Donald and David.

“With the governor coming, it’s been exciting,” David said, adding his parents always led by example.

So what do a governor and a man who’s lived for more than a century talk about? … Football, of course.

McCrory is a graduate of Catawba College and Claude attended Lenoir-Rhyne University. The two teams play this weekend, and Claude asked the governor if he wanted to make a bet.

McCrory accepted the bet, and the wager was a case of Cheerwine. But, it wasn’t until after the bet was made that McCrory found out Lenoir-Rhyne is currently undefeated.

After meeting with the Lyerly family, McCrory met with other veterans who live at the facility and thanked them for their service.

“You’ve made a sacrifice that’s second to none,” he told them.

McCrory also announced a new initiative, called NC4VETS, to assist veterans around the state. The initiative is a “one-stop shop” for information for veterans and their families, McCory said.

A resource  guide for veterans is now available in print and online at www.nc4vets.org.  A call center has also been established to guide veterans to services in their area. The number is 1-844-NC4VETS (624-8387).

The key to the strategy is to go to where the veterans are, McCrory said.

“We’re reaching out to them any way we can,” he said

He said the state Division of Veteran Affairs has opened new service offices in the each of the state’s four VA medical centers: Asheville, Salisbury, Greenville and Wilmington.

McCrory spoke about his cousin, who served in the Marines during the Vietnam War and whose two sons are members of the military.

“I want to make sure as governor that when my cousin’s two boys come home that they’re going to be treated well,” he said.