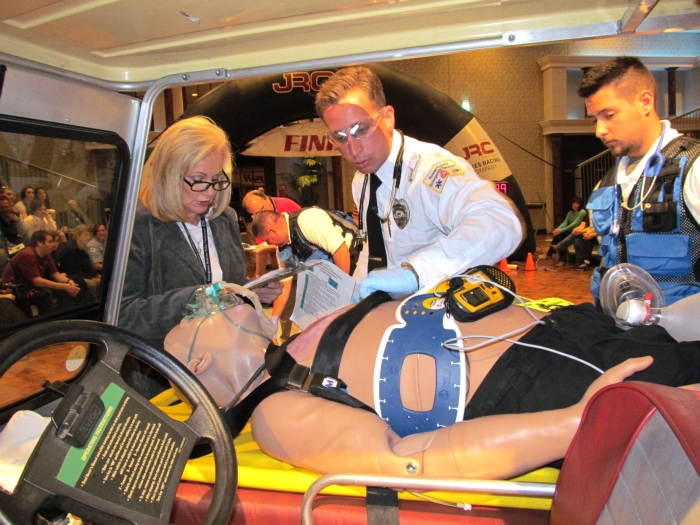 Last month, Rowan County Emergency Services’ Aaron Thurston and Daniel Medina won the North Carolina Paramedic Competition. The pair work in the EMS Division, located on Old Concord Road, and won the state’s paramedic competition after being named regional champions in 2012 and 2013. The pair is the 24th winner of the competition, which began in 1991.

“It’s an achievement that not everybody gets and there’s only so many of these every year,” Medina said. “To represent the county is definitely a privilege. It helps to increase awareness and helps surrounding counties to want to compete, which, in turn improves their EMS service to their communities as well.”

The plaque that Thurston and Medina will receive only has 24 spaces for winners and they’ve already got a goal in mind for 2015.

“We are already the last guys on one plaque and we want to be the first guys on the next plaque,” Thurston said.

“I think just the communication and the teamwork fell together because of the multiple times we’ve done it,” Thurston said. “

The pair joked that scenarios in the competition are a bit exaggerated, but based on potential, real-life experiences.

“I think it makes us study and review more and we have to go look up the obscure stuff that we don’t see everyday,” Thurston said. “You have to prepare for everything. If I’m weak in something then (Medina) may be strong in something and we’ll be able to pull it off.”

A news release from the N.C. Department of Health and Human Services described the scenario for all the competitors.

“In the scenario, event staff are providing life-sustaining support to a runner when the competing teams arrive,” the release stated. “Not long after, there’s an alert broadcast to the team about a gas leak at a nearby food truck. Moments later a loud explosion rips through the competition area, followed by simulated smoke from a fog machine. Suddenly two patients are brought to the finish line, one burned and confused with hearing loss, but talking; the other unconscious with part of his lower left leg severed in the explosion.”

The competition allowed teams 14 minutes to treat the victims.

Medina and Thurston gave some credit to Mecklenburg County’s EMS for helping the Rowan County team prepare for the state championship.

“We all helped each other practice and they helped us prepare,” Thurston said. “They have been great sportsmen, great competitors and great friends.”

Thurston and Medina also received recognition for winning the state championship at Monday’s county commissioner meeting. Though the recognition was more than a simple handshake. The entire commissioners’ meeting room stood for a lengthy applause.

“I’m very proud of the guys, their continued efforts and determination,” Cooper said. “To reach the level they have reached, it’s taken lots of hard work and determination. It’s all been based on their own desire to do it.”