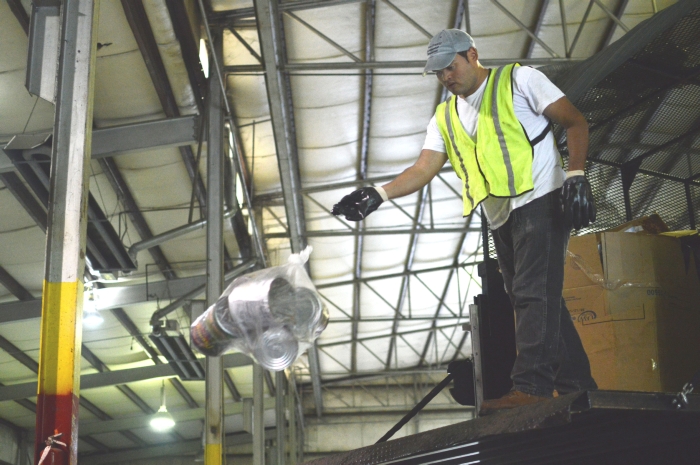 The recycling center typically doesn’t — and isn’t allowed by law — to accept pesticides, paint or rechargeable batteries on a normal day, but collected thousands of pounds of hazardous waste Oct. 29 as a part of its annual special collection day.

Caleb Sinclair, who runs the county’s recycling processing center, said the event brought in 100 pounds of batteries, 365 pounds of flammable liquids, 700 pounds of alkaline paints and at least 3,000 pounds of latex paints. Though he didn’t have exact numbers for other categories, Sinclair said the facility collected about 10,000 pounds of electronics, also called e-waste, and about 75 tires.

“Everyone has these items in their home or in their garage and that are not environmentally friendly,” he said. “Our citizens need an outlet for that stuff and we’re very fortunate to able to provide this free service because people need it.”

Typically, the processing center only accepts items commonly thought of as recyclable, such as plastic material, metal cans and paper. In order to have the one-day event, Rowan County Environmental Services Director Kathryn Jolly said the center had to obtain a special permit. Rowan County can’t add hazardous waste to its list of regularly accepted materials strictly declining tonnage at the landfill. The bi-annual hazardous waste event is paid for entirely by landfill disposal fees.

Tonnage for fiscal year 2014, which ended in June, is actually slightly higher than the two previous years. Though, overall the landfill’s tonnage statistics show a steady decline.

Revenue is a slightly different story. The amount of revenue coming into the landfill hit its peak during the 2009 fiscal year, according to statistic provided by Jolly. Last year’s landfill revenue was the third highest in Jolly’s statistics.

Most of the material collected during last week’s event has already moved on from the recycling processing center. Though, six-foot tall stacks of televisions still take up one corner of the warehouse.

Sinclair said fate of the waste varies. As an example, he said flammable liquids are blended to be later used to power cement kilns.