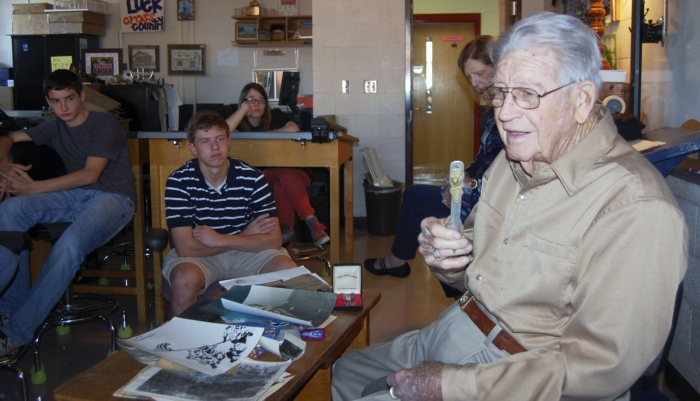 Russell shows off a letter opener given to him by a German he helped capture. Jeanie Groh/Salisbury Post

t’s been a long time since Gilbert Russell’s been in school. The 89-year-old Granite Quarry native dropped out when he was in seventh grade, but he returned to school Monday to share his memories of World War II with Billy Mills’ classes at East Rowan High School.

Despite his age, Russell clearly remembers names and details long forgotten by the history books. He speaks slowly, but deliberately. He has a little bit of trouble hearing, but that doesn’t dampen his sharp sense of humor.

Mills said he wanted his students to talk to a World War II veteran while they still have the chance.

Mills’ own father is a World War II veteran — a member of a generation that is fading quickly.

“There’s no substitute” to talking to a veteran, Mills said. “I wanted them to be able to see the tears in his eyes.”

“I don’t get just anyone to come into my classroom,” he said.

Mills gathered the seats in his classroom close to the front to create an intimate feeling as Russell shared his story.

“When I was 15, I learned to fly at the Salisbury airport,” he told the students.

When World War II broke out, Russell was too young to enlist, so he joined the Civil Air Patrol, allowing him to put his piloting skills to good use.

As a 17-year-old, he was based in Manteo and flew up and down the coast with a bomb and oil slicks looking for German submarines.

“They called us the kids,” he said. “There’s only three of us left that served with the Civil Air Patrol at that time.”

“The main thing I was interested in was sinking submarines,” he said. “I dropped one – it hit right beside the submarine.”

On one mission, he was flying alongside a friend his age when a heavy fog rolled in along the coast of North Carolina.

“He could fly his plane better upside down than I could right side up,” Russell recalled of his friend. “There was one hole in the fog over Ocracoke Island.”

The two had to land there and spent the night in their planes swatting away mosquitoes. The next morning, they were able to make contact with their base and had fuel delivered by motorboat.

Three to four weeks after he turned 18, Russell went to the draft board in Spencer to enlist.

“My mamma and daddy didn’t know it when I went there,” he said.

Four days later, he was called up and went to Fort Bragg for his physical examination and to begin boot camp.

Since he already knew how to fly, Russell requested to be put into the Air Corps, but his request was denied.

He was told he didn’t have enough education.

“If any one of you drops out of school, I’m gonna take a buggy whip out on you,” he told the students.

Instead, he took infantry training.

Russell’s daughter prompted him to tell Mills’ students about his first day in battle.

“We could see the glow of fire in the mountains,” he said, as he recalled marching all night.

When they reached that glow, he realized it was a village.

“I was walking up and down the street, shaking in my boots,” he said.

It was then that he saw three Germans aiming their guns right at him.

“I couldn’t pull the trigger,” he said, explaining that he couldn’t’ take a human life.

Right then, his sergeant came up beside him.

“They shot him instead of me,” Russell said. “At that point in time, I emptied eight rounds out of a M1 rifle.”

While he doesn’t know what he hit, if anything, when he passed that corner later that afternoon, there were three dead Germans lying there.

A few minutes later, Russell passed around a metal letter opener and explained it came from a German soldier he helped capture.

The man told him, in perfect English, to take it, because he knew it would be taken from him when he was taken into custody.

Russell and his fellow soldiers rescued a group of Italian villagers who were being held captive by the Germans in a goat barn.

“The Germans treated them terrible,” he said. “They were captive in their own village.”

Russell wasn’t the only special guest in Mills’ class that day.

N.C. Sen. Gene McLaurin was also there to listen to Russell’s story, and to present him with certificate acknowledging his service to the state of North Carolina and the entire country in the Civil Air Patrol.

“This is a member of the greatest generation of Americans, “ McLaurin told the students.