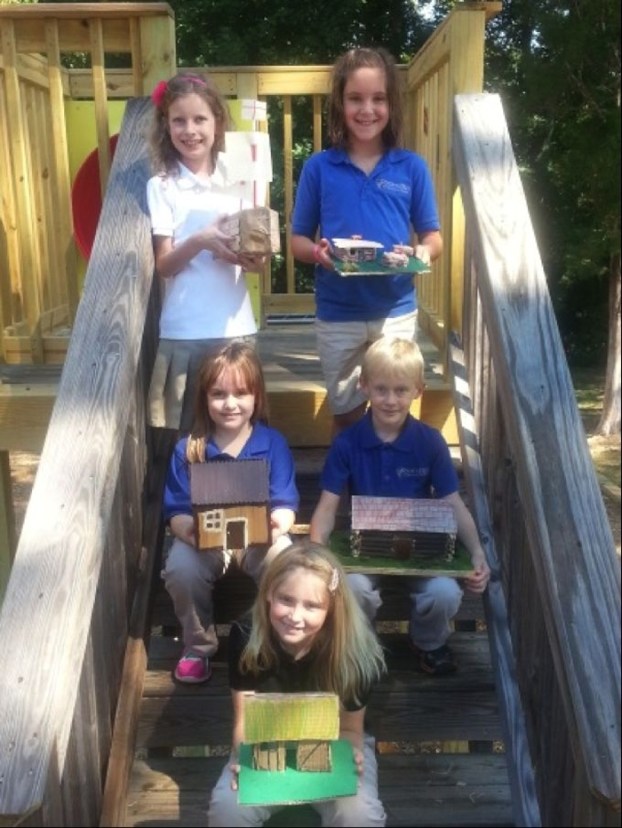 The colony of Jamestown came to life in the third-grade classrooms of North Hills Christian School as its third- grade students built ships, cabins and forts to incorporate a hands-on learning environment in the classroom.

The students studied how the group of 105 settlers and 39 crewmembers set sail in December 1606 and settled in Jamestown in May of 1607, as well as the group’s main objectives of sending gold back to England and finding another route to Asia.

The students also learned about the three ships that were used to take the settlers to Jamestown.

Jill Boger made a replica of one of those ships, the Godspeed, using a milk carton covered in brown paper as the hull of the ship and straws and triangle shapes for its masts and flags. Jonathon Bello made a replica of the Discovery out of Popsicle sticks and “hot glue that my mom used.”

Student Noah Merrell built a replica of the colony’s fort out of Popsicle sticks and pretzels. He shared with his classmates that the fort was built in a triangle shape.

Cabins were the official housing of the settlers and also the official build of the third grade students. Sam Wilson made his cabin by using Lincoln logs as the walls and a cereal box as the roof. Other students used graham crackers, pretzels, popsicle sticks and actual pine sticks to make their cabins.

Although cabins were the most popular build in the class, there was another type of living area built – Emmy Lou Ellison made a wigwam out of a half circle of paper, covered with cowhide, supported by sticks tied together at the top and tacked together.

“Wigwams were used as a house and a tepee was used to sleep in when you go hunting,” she told her classmates.

Carlie Latva served the class with a taste of colonial crumb cake made with traditional ingredients such as wheat and cornmeal. The students decided they would rather buy their cake at the grocery store because “they taste much better.”

Peyton Rodgers column: Life of a student athlete is hard, but worth it

The life of a student athlete is far from easy, as they tackle practices, games, homework, classes and even sometimes... read more