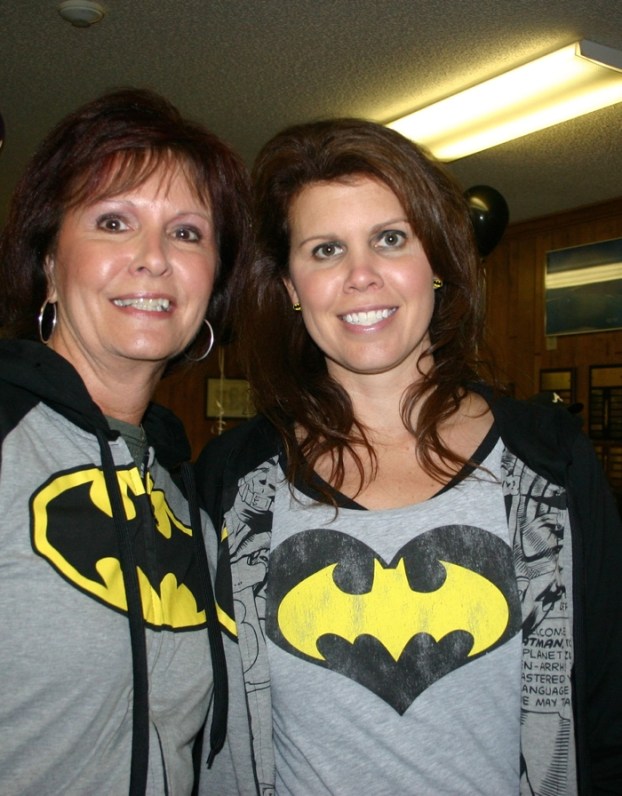 Susan Shinn/For the Salisbury Post Stacey and Brittney Barnhardt, Bradley’s mom and sister, organized a superhero-themed birthday party for the children of Bradley’s teammates and classmates who have played in the golf tournament in his memory over the years. Batman was Bradley’s favorite superhero. ‘They are our superheroes,’ Stacey said Saturday.

Superheroes are not afraid of rain.

Dozens of Bradley Barnhardt’s friends and family members gathered at Corbin Hills Golf Club Saturday to play in the 8th annual tournament in his name.

Saturday was Bradley’s birthday. So his mom, Stacey Barnhardt, came up with the idea to host a superhero-themed birthday party this year in honor of all the children of Bradley’s friends.

“Since it fell on his birthday, we wanted to do something for all the players who’ve been so loyal over the years,” Stacey said. “We wanted to honor the children of our own superheroes. The greatest superpower is caring for others.”

Yesterday would have been Bradley’s 38th birthday. He died on Jan. 2, 1996, at age 19, but his friends from South Rowan High School and the Synergy soccer team have gone on to have families of their own.

And it seemed they were all in attendance.

The rain didn’t deter anyone, although they gathered indoors, picnic style, in the clubhouse for a lunch of Gary’s Barbecue.

Indeed. Friends of Bradley’s and friends of friends came from as far away as St. Louis, Colorado Springs, Raleigh and Rockingham, as well as China Grove and Salisbury.  “I do this every year,” said Scott Wilson, who came from St. Louis with his wife, Emily. “I’m just not gonna miss it.”

Scott was playing with Bradley’s dad, Terry, along with his friends James Serra and Eric Bridges.

“They’re like Superman,” Stacey said. “What is that? Neither rain, nor snow, nor sleet — no wait, that’s the postman! What I’m saying is, there’s nothing to keep these guys from coming today.”

She added, “To me, Bradley is still 19. But these are men who are instilling all these good values in their children.”

And there were a lot of children.

“Four or five of us have three children each,” said Jamey Basinger, a Synergy teammate of Bradley’s.

Before travel soccer came to Rowan County, there was Synergy. Fifteen young men played together between 1987 and 1994, during their middle-school and high-school years.

“We were the first soccer team from South Rowan that went to the playoffs our junior and senior years,” Jamey noted.

Melissa Bost Morris graduated from South in 1995 and knew all the guys on the soccer team.

“I just come and do lunch and support,” she said. “It was a very special group.”

Her older son, Garrett, sported a Captain America T-shirt. There were plenty of Batman shirts in the crowd, because Batman was Bradley’s favorite superhero, his mom said.

Their dad, Tommy, was Bradley’s cousin, said mom Lindsey. “Stacey and Terry are sponsoring Tommy and two other players today. I knew the boys would like this superhero party.”

Just before the 1 p.m. tee-off time, Brittney gathered all the children up on the deck for a balloon release.

If you think getting some three dozen youngsters to pose for a picture is a bit like herding cats, well, yes, it was. But the kids listened beautifully, all releasing their balloons at once. Except for little Mason Deal, whose balloon happened to be tied to his foot. Melissa untied it, and the youngster finally let his white balloon go.

Proceeds from the golf tournament raise money for Relay for Life and the Bradley Barnhardt Memorial Scholarship.

By Elizabeth Roy For the Salisbury Post At its 61st Annual Antiques Show next weekend, the Rowan Museum will be... read more