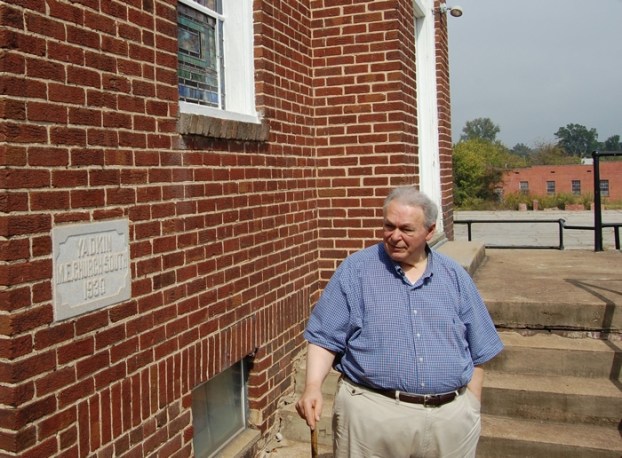 David Purtell/Salisbury Post Gary Hauze stands outside of Yadkin United Church in Spencer. He is trying to form a coalition to get a museum built near the church and the Yadkin River that will display the area’s history.

Money coming in for museum in Spencer

Donations have been given for a proposed museum near the Yadkin River in Spencer.

More than $13,000 has been donated to the Yadkin Historical Museum Foundation since the Post first published a story in early October about the planned museum near the Yadkin River in Spencer.

Plans call for the museum to be a celebration of the area’s history.

The museum is the idea of retired pastor Gary Hauze and Sherrell Hedrick, who is a member of Yadkin United Church.

The church is adjacent to the proposed site for the museum, which is along U.S. Route 29 across from the former Color-Tex plant.

“I’m so pleased with the response this has gotten,” he said, “Every gift counts.”

A banner advertising the museum has been placed on the property.

Hauze said he and Hedrick plan to close on the purchase of the privately owned land in December. He plans to have the first meeting of the foundation’s 12-member board in January and wants construction on the museum to start by June 2017.

Hauze said he is working with the town of Spencer to have the property rezoned — it is currently zoned for industrial use.

Spencer Mayor Jody Everhart has said he supports the plan.

Donations can be sent to PO Box 68, Spencer, N.C. 28159. For more information, contact Hauze at gchauze@yahoo.com.

This adorable black and tan German shepherd mix has lots of personality and would love to sit with you and... read more