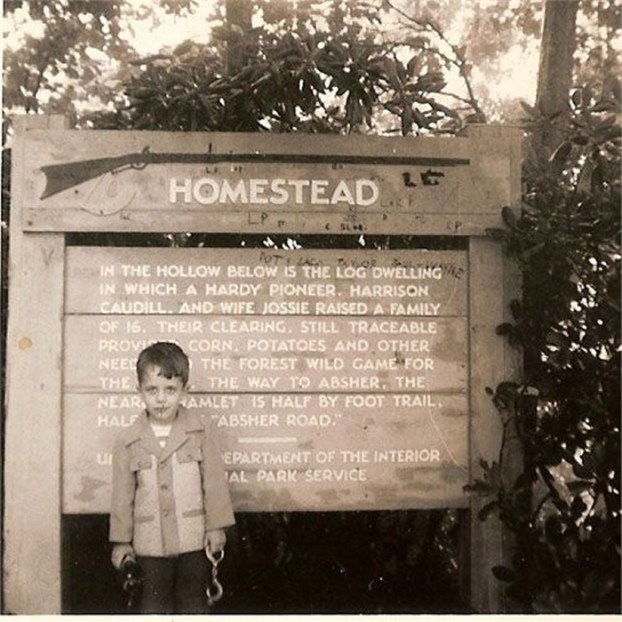 Mack Williams (around 1956) at the Parkway overlook from which the old Caudill Family Homestead (built 1890s)can be seen.

In Gustav Mahler’s musical composition “Das Lied von der Erde” (“The Song of the Earth”), a wanderer sings about going into the mountains to seek rest for his weary heart.

As a child, my family’s regular mountain journeys were in much lighter vein, centering on the delights of the Blue Ridge Parkway.

These earlier trips were made in my father’s black, early 1950s Studebaker, but its “somber” look also meant summer parkway fun.

I remember apple barns filled to a height greater than me. As opposed to a grain elevator, falling into an apple barn probably wouldn’t be as deadly, causing bruising of both human and apple.

At one famous parkway overlook can be seen the ancient (by American standards) Caudill family homestead in Doughton park near Sparta.

It could be called both a “cabin in the hills,” lying in the Appalachian Mountain chain, and a “cabin in the valley” for its placement in a particular “dip” (valley) of that chain.

Signage says the Caud-ills raised 14 children there, while mentioning the crops they grew and animals they hunted. While part of our “vacation vista,” in its heyday that cabin was the site of dead-serious survival!

In a photograph (looks to be about 1956), I’m standing next to the National Park signage for the Caudill family homestead. (I can still see it in my mind’s eye.) We must have also been heading to Tweetsie, since I’m “armed” in the photograph with a pistol and pair of handcuffs. I guess I was going to shoot the Indians and cuff the bad men, vice versa, or perhaps even both.

Judging a little from the look in my eyes in that snapshot, I may have been on both sides of the law.

Reflecting on my 1950s jacket, it kind of reminds me of those shirts Charlie Sheen used to wear on the TV show “Two and a Half Men” before he quit.

Elsewhere on the parkway that day, we found an overlook whose “look” was an “adjacent” one into a stand of trees. Its great virtue was that it had a “picnic-size” little grassy hill.

I still remember that chilly, windy, cloudy day; and I think I was allowed to drink some hot coffee from a thermos to help keep me warm.

Nowadays, coffee is given to hyperactive children for its opposite, calming effect on them. I seem to only remember myself as a serious, little 63-year-old man back then, too, but this is probably a product of the passage of time and wishful thinking. (Lately, I sometimes get the feeling that I’m 5 or 6.)

In a picture taken on that grassy hill (not knoll), I’m standing behind my Grandmother Williams. She has her back to me while holding her arms to stay warm, and her hair is in its perpetual bun.

I’m standing there “consuming” a cookie. I use quotation marks because that cookie has every appearance of having been placed partway in my mouth for the effect of “cuteness” instead of nutrition. I have no doubt that following the shutter’s release, the cookie went on to fulfill the destiny for which it was crafted.

One of my favorite memories of the Blue Ridge Parkway has to do with a bit of subterfuge on the part of my first cousin, Troy Lee Absher.

It was early in the morning, and Troy was riding with us in the old black Studebaker as we headed up into the mountains. He suddenly told me to look out the car’s side window at the “Indian smoke signals.”

Looking out, I saw what appeared to be puffs of white smoke rising to the tops of the trees in the valley below.

I said words to the effect: “Are they really Indian smoke signals?”

To which Troy responded by saying words (or word) to the effect “Yes!” (I use “words to the effect” because I was very young and there has been much water “under the bridge,” “over the dam,” “down the drain,” etc.)

I later learned from our science books at Granite Quarry School that what I had seen wasn’t smoke particulates, but instead water vapor.

The human mind is strange in the manner of its storage of things. Through “compartmentalization” it tucks away information diametrically opposed to each other within the same brain for later recall.

Because of this, I can say I definitely remember the time of seeing actual, mid-20th century, Indian smoke signals on the Blue Ridge Parkway, pointed out to me by my cousin, Troy Lee.

Literary Bookpost 1. Everything I Need to Know I Learned from a Little Golden Book, by Diana Muldrow. 2. Sword... read more