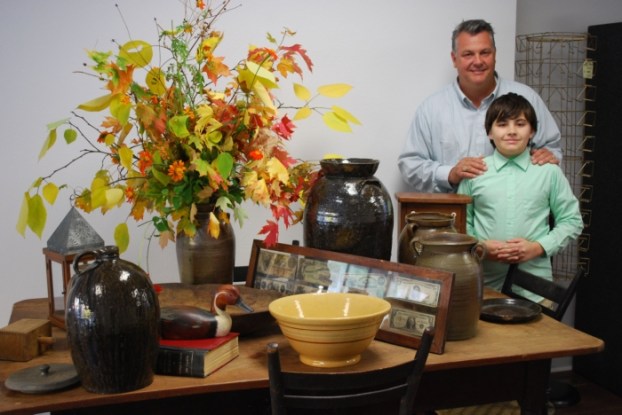 Antique dealer Anthony Fisher and his 12-year-old son, Michael, stand before a display of 1800's Catawba Valley pottery, 1860's Windsor chairs, and a three-board 1860's pegged walnut table, among other items. Fisher will be showcasing several Rowan County antique items at the Rowan Museum's upcoming antique show. 'During the Civil War era, the houses were burnt and troops took the furniture and other fine things,' said Fisher. 'That's one reason it's so hard to find Rowan County things.' Elizabeth Roy, for the Salisbury Post.

At its 61st Annual Antiques Show next weekend, the Rowan Museum will be reliving history through objects of the past. Antique dealers will sell collectibles from the last several centuries: Civil War-era pottery, furniture from as far back as the 1700s and Salisbury postcards from the early 1900s to name a few.

And best of all, experts will share the stories and histories behind the antique treasures.

“There’s just so much,” said Kaye Brown Hirst, executive director for the Rowan Museum. “It’s not a gigantic show, but it is a fine show with a lot of history.”

The three-day event will host 19 vendors from North Carolina, South Carolina and Virginia, and kick off with a Patron’s Party on Thursday, Nov. 6.

“We have quite a few unique dealers, different than we’ve had in the past,” said Tricia Creel, education coordinator for the museum. “I’m excited to see what they bring to the show.”

Local dealer Anthony Fisher has long been in the antique industry but is new this year to the Rowan Museum antique show. Fisher, 43, was drawn into the antique business while working in furniture repair and remembers buying his very first antique at age 18.

“It was a candlestick. To this day I’ve never sold it,” said Fisher.

In a show that will feature American, English and European collectibles, Fisher plans to showcase multiple pieces that are specific to Rowan County and the surrounding area. He has 1790s and 1860s walnut and pine furniture from Rowan County, and an extensive collection of 1800s Catawba Valley pottery, among other regional items.

“I’m looking forward to meeting new dealers, buying new things from other dealers, and showing and selling my things that have been hidden away,” said Fisher.

A veteran dealer of over 15 years at the Rowan Museum show, Connie Marks from Rocky Point will have her antique textiles displayed on the show’s stage. Marks has linens — bed linens, bath linens, clothing, lace, and more — from as early as the 1860s and as late as the 1960s.

“I clean and restore the linens myself,” said Marks. “I have several people who have been buying from me in Salisbury for all the years I’ve been there.”

An estimated 150 people are registered for the kick-off Patron’s Party, which Hirst calls one of the premier Rowan County social events of the year. Though it is too late to purchase a ticket, all are welcome to join when space is available. Ticket prices this year were $100 per person.

“Patrons can peruse the show, enjoy music, and get first chance at all of these wonderful antiques,” said Hirst.

Visitors will be a mix of local people and those visiting for the weekend, and will have varied experience levels with antiques, Hirst says.

“It’s both the die-hard collectors, after one thing, and the people who have a home full of antiques and simply want to add to it,” said Hirst.

The antique show has seen an increasing number of younger guests in recent years.

The Rowan Museum antique show has been in existence since the museum was founded in 1953 and is the museum’s largest annual fundraiser.

Over its 61 years, the antique show has created traditions of its own. Two examples of this heritage are the chicken salad and the beef and vegetable soup that will be sold over the course of the weekend to hungry shoppers.

Local caterer Debbie Suggs has been making the dishes for the antique show for the past 13 years and is preparing to make between 26 and 30 gallons of soup for the event.

“The soup recipe’s at least 50 years or older,” Suggs said. “It’s got about everything but the kitchen sink in it.”

From booth-sitters to ticket-takers to food servers, the annual antique show is entirely volunteer run with the exception of Hirst and Creel who make up the museum staff.

The museum’s current educational offerings include summer history camp for elementary and middle school-aged students and a monthly history club for adults. The Rowan Museum also works with the Historic Salisbury Foundation to sponsor a 14-week local history class that runs February through May.

“The museum is very active in the community and has been for 61 years,” said Hirst. “The antique show is what makes it possible.”

Salisbury City Council will review the contract for a search firm chosen to assist in finding a new city manager... read more