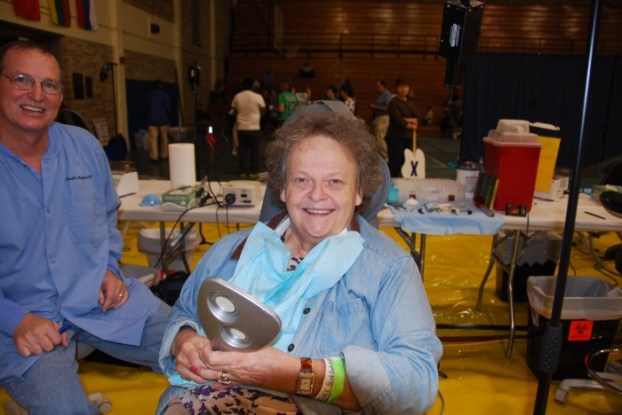 Submitted photo Marlene Stephenson has reason to smile after her dental work at the 2013 Missions of Mercy clinic was finished by Dr. David Mayberry, left.

SALISBURY — With her smile and personal testimony, Marlene Stephenson is like a walking advertisement for the Missions of Mercy dental clinic, which will be coming back to Salisbury March 6-7, 2015.

“You feel awkward about this, it’s embarrassing sometimes,” Stephenson said, “but in this case, they made us feel so comfortable.”

In late September 2013, Stephenson and her husband, Paul, were among more than 800 people who came to the free, two-day dental clinic at Catawba College.

The clinics, held periodically throughout the state, are an outreach program of the N.C. Dental Society, but it’s up to each community to raise the money; schedule all the dentists, hygienists and dental assistants; and organize the volunteers and feed them.

Thanks to sizeable donations, including $25,000 from the Robertson Family Foundation and $25,000 from Tom and Dottie Abramowski of Rockwell Farms, the $75,000 fundraising goal for the 2015 clinic already has been met.

This is the second time the Robertson Foundation and the Abramowskis have donated $25,000 to the clinic. The Salisbury Rotary Club also held a weekend tennis tournament, organized by Reid Leonard, whose proceeds went toward the 2015 Missions of Mercy dental clinic.

Krista Woolly, executive director of the Community Care Clinic of Rowan County, headed the committee whose task it was to raise the $75,000. She said committee members were worried about being able to meet this same goal for a second clinic, and she expressed deep appreciation for the generosity she has witnessed.

“Our focus now will switch to recruiting volunteers,” she said.

That’s also a tall order. The 2013 Missions of Mercy dental clinic in Salisbury involved more than 800 professional and community volunteers.

Many of the community volunteers came from local churches, and the Rev. Rhodes Woolly, senior pastor at St. John’s Lutheran Church, is heading those efforts.

People wishing to volunteer may visit http://www.ncmom-salisbury.com to sign up. It’s an easy process, Krista Woolly said, and the site also is still taking monetary contributions, which will now go toward a third clinic in the future.

Mayberry  also organizes all the dental volunteers. In 2013, Salisbury alone had 31 dentists participating, and the Old North State Dental Society supplied 25 of its members over the two days. In all, there were 124 dentists and 160 pre-dental students. The 312 professional volunteers included hygienists, dental assistants, nurses, nurse practitioners, EMTs, lab workers and pharmacists.

Some local companies already have stepped forward to pledge their equipment and services. Carolina Tractor will provide, for example, all the electrical needs during the clinic. United Rental of Salisbury will be supplying all the air-generation systems.

Krista Woolly said the 2015 Missions of Mercy clinic will be looking to serve about the same number of people as it did in 2013.

Stephenson, 70, is disabled and relies on a motorized scooter to get around.

“If I weren’t handicapped, as far as my scooter,” she said, “I would volunteer.”

The 2013 clinic was the first time Stephenson had ever attended a Missions of Mercy clinic. “I really have to say it was wonderful,” she said.

Stephenson said she had some fillings that were falling out and was having a particular problem with a sensitive tooth on the left side of her mouth. Her husband, Paul, had a crack on his partial plate he also was seeking help with.

Marlene expected the dentist who eventually examined her to recommend she try false teeth. But after some consultations, dentists told Stephenson her teeth were in better condition than she thought.

That first day, she ended up with Mayberry, who fixed a real problem tooth the first day. Stephenson returned the next day for a similar procedure, and she also had a cleaning.

“He was wonderful,” Stephenson said.

Meanwhile, Paul had the crack in his partial plate repaired.

“I would tell anybody who would want to do it, go ahead,” Marlene said of attending the free clinic.

She was impressed by the overall process — the registration, blood pressure checks, the separation of patients by the procedures they needed and how the dentists were ready to work with an assistant nearby and all the materials they needed.

“There were so many volunteers, it was great,” Stephenson said. “… If anybody was really pleased, it was me. Now I have a beautiful smile, and just the other day, I was able to show it off for our 50th wedding anniversary.”

After the clinic, Mayberry also made arrangements to see Stephenson for follow-up work at his office.

Krista Woolly said there will come a time on the second day of the upcoming clinic — probably around midday March 7 — when the organizers will have to say, “This is where the line stops.”

At the 2013 clinic, Woolly said organizers were able to bring in all the people beyond that point and offer them at least some kind of services, such as a teeth cleaning.

“I hope we can do that again,” she said.

As always, it will be first-come, first-served for the patients. They should be prepared to line up on Thursday night (March 5) or early in the morning March 6 to receive numbers for when the doors open.

Purtell column: Elections are opportunity for county, city to come together

Elections have consequences. That’s the message that should spread loud and clear around Rowan County and the rest of the... read more