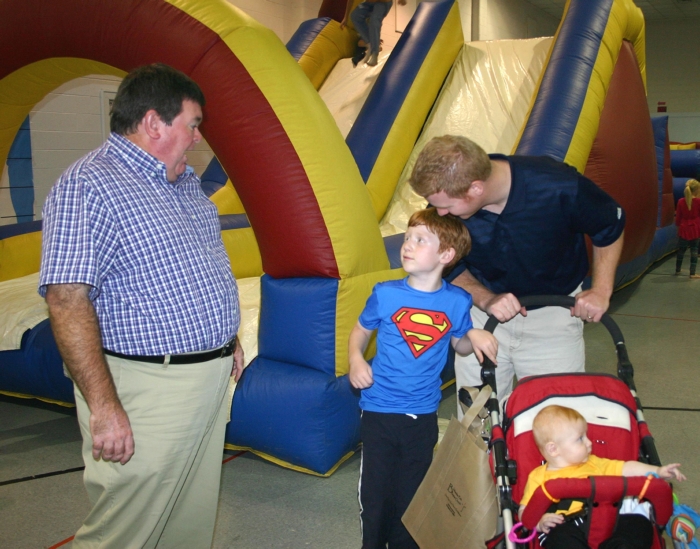 The Rev. Phil Goble talks with Will Welch and his dad, Josh, while brother Whit’s attention lies elsewhere.

KANNAPOLIS — Phil Goble once tried to argue with God. Then he tried to tell God what he was going to do with his life.

You can imagine how well that all worked out.

Finally, Goble surrendered to God and listened to His plan. Which is how the Rev. Phil Goble came to be pastor at Blackwelder Park Baptist Church.

Goble, 49, served as interim pastor in September before taking the reins Oct. 1.

“It’s going well,” he said Wednesday evening, during the church’s annual fall festival. “I have to keep reminding myself it’s only been 29 days. Everything is moving along. Everybody seems excited, so that’s good. They all want to move forward.”

The congregation is definitely ready for a new direction. The departure of the church’s most recent full-time pastor created a division among members. But 177 families are currently active at Blackwelder Park, and Josh Welch, a lifelong member, says that younger families have been visiting the church again.

“Phil is very easy to work with,” Welch says. “He wants the best for the church. You can tell.”

“It is time for a fresh beginning and a new start,” says his wife, Katie.

The call to Blackwelder Park represents Goble’s first full-time parish. Goble spent most of his career as a sportswriter for several North Carolina newspapers.

“For years,” he admits, “I’ve known God’s been calling me into full-time ministry.”

In 2000, Goble and his wife, Michelle, were attending Sunset Avenue Baptist Church in Rocky Mount, the place they’d met and married. The pastor there brought numerous missionaries to the church, which always brought Goble to tears.

“I felt a real strong call to ministry,” Goble says. “But I told the Lord, ‘You want somebody a whole lot better than I am. I just didn’t think I had what it takes.”

Goble wasn’t convinced. He told God, “You have to show me I’m interpreting your word correctly.”

“You get me into Southeast,” Goble told the Lord.

Goble’s problem was that the seminary required high school transcripts. “My dad was a Marine. We’d been all over the place.”

So one afternoon around 1 p.m., with the application deadline a week way, Goble said, “All right God, get me those transcripts.”

God did just that.

“I made four phone calls, and every transcript was on its way in an hour and a half,” Goble said.

And he was on his way to seminary.

But he still wasn’t through arguing with the Lord.

The pastor there told him, “The Holy Spirit’s all over you.”

Meanwhile, the paper was sold, and Goble found himself out of work. He and some newspaper friends started their own publication, which lasted three years. By the time that paper closed, Goble had a bi-vocational job at a church in Elkin. Goble then went to work for Shepherd’s House, a homeless shelter, and became more and more active at Temple Baptist Church.

He finished seminary in 2013, and in the next year applied for some 300 church positions.

“What God laid on my heart was that if I felt I was qualified, I applied,” Goble says. His newspaper background helped him in researching churches. In the Baptist church, congregations are independent and pastors may send the applications directly.

He did just that with Blackwelder Park, and Anne Corriher, chairman of the search team, contacted him in June. The team heard him preach and then the Gobles visited Kannapolis in August, and he preached there as well.

The team had sifted through some 200 candidates, Corriher says. “We just thought he was such a good preacher. His sermons were wonderful. They held our interest. He was just what we were looking for. We just felt like God had sent us the right man.”

Later, Goble looked up Psalm 125:2. It reads, “As the mountains surround Jerusalem, so the Lord surrounds his people, from this time on and forevermore.”

Goble liked the verse so much that he preached a sermon about the Lord protecting his people.

The Gobles have a son, Devon, 16, a junior in high school, and daughter Marilyn, 21, is a junior at Western Carolina University. They’ll remain in Mount Airy for now because of family obligations. Goble works at church on Tuesdays, Wednesdays, Thursdays, and of course, Sundays. He prepares for the week at home on Mondays, and his days off are Fridays and Saturdays.

Since he’s the only full-time pastor, however, he says, “I consider myself on-call 24 hours a day, seven days a week.”

Blackwelder Park’s past problems did not deter Goble. In his research, Goble had read about the very public split.

“I only had one question for them,” he says. “I asked, ‘Are you ready to go forward?’ That’s all I cared about.”

Goble credits interim pastor Bill Saylor for encouraging the healing process. “He was exactly what they needed. When I came, they were ready to go. It’s been fun to watch the Holy Spirit lifting up people again. I’m seeing more smiles and laughter. More and more people are lingering after church. I’m having to catch up, because they’re ready go forward. That’s exciting.”

Goble says that when Welch’s father, the Rev. Stan Welch, served as the church’s longtime pastor, attendance was 500 each Sunday.

Away from church, Goble enjoys golf and writing. He’s published two novels and has a third on the way.

Like many in his profession, Goble has a great sense of humor.

“I know what my destiny is,” he says. “Why shouldn’t I be happy? I’ve always been this way. I like to have fun.”

Goble brings a sense of fun to his job — and hope.

The church’s new slogan is “One Hope. One Heart. One Mission.”

“The world out there needs hope,” Goble says. “We need to be able to explain that hope and lead them to a source of hope. I think it’s gonna be fun. We’re gonna have a blast.”