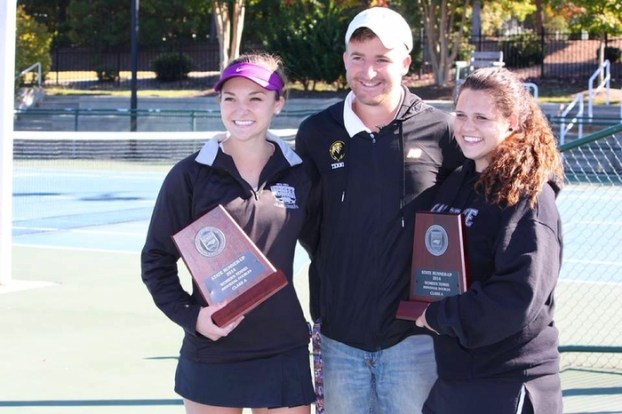 Meghan Hedgepeth, Brooke Herlocker and coach Sam Churchill led Gray Stone to a 17-2 record and the third round of the 1A dual team playofsf. Hedgepeth and Herlocker were runners-up in the individual state doubles tournament.

J.C. Smith and Livingstone will play this year’s Commemorative Classic  football game at the Irwin Belk Complex on the campus of JCSU.

The game was previously scheduled to be played at Memorial Stadium. Kickoff will be at 1 p.m. on Nov. 8.

Since the inception of the Commemorative Classic in 2009, JCSU hasn’t   lost.

The last win in the rivalry  for Livingstone came in 2008 when the Blue Bears claimed a 32-26 win.

Livingstone is at Fayetteville State on Saturday.

Chase won 7-0 against Randleman Wednesday and will play at Salisbury in the second round of the 2A playoffs.

• In the eGolf Tour’s Championship at Red Hawk,  Frank Adams III shot 68 and  Will Collins shot 70.

• The Jerry Barger Memorial Golf Tournament is set for Corbin Hills on Nov. 22-23.

The start time both days is 9 a.m.

The format is three-players teams competing for 36 holes, with six holes each of Best Ball, Captain’s Choice and Texas Scramble.

Teams will be flighted after the first round.

The entry fee is $80 for non-members and $50 for members. That fee includes  golf, food, beverages and prizes.

This tournament is designed to honor Jerry Barger  and recognize the No. 36 he wore  so proudly wore during his playing career at Duke.

Jalen Houston scored  touchdowns on runs of 8 and 13 yards.  Gerquavius Weeks scored on a 45-yard run.

Zeb Burns closed  the  first half with a 2-yard touchdown run.  Tykese Warren scored on a 5-yard run, while Bradley Allen returned a block punt 25 yards for a score.

Jaxon Wheeler was 6-for-6 on PATs.

Houston had an interception.  Joseph recovered a fumble. Calub Pope blocked a punt.

• China Grove’s eighth-graders closed the season with a 32-14 win against Corriher-Lipe.

Elijah Eason had TD runs of 45 yards and 6 yards, plus two PAT runs for the Red Devils. Alex Shaffer scored on an 18-yard run and a PAT run.

Nick Moore had a 2-yard scoring run, and Josh McCurry had a PAT run.

Catawba’s  Bethany Davis  made 12 saves as Catawba battled to a scoreless tie with Pfeiffer on Senior Night at Frock Field.

The Golden Bulls rallied from a 2-0 deficit.

Carrie Blunt had 20 kills for the Blue Bears.

The names of two North Rowan cross country runners were  left out of a report on the  2A Midwest Regional.

SALISBURY — There was a point Saturday when Catawba head coach Curtis Walker turned to an assistant and asked, “Are... read more