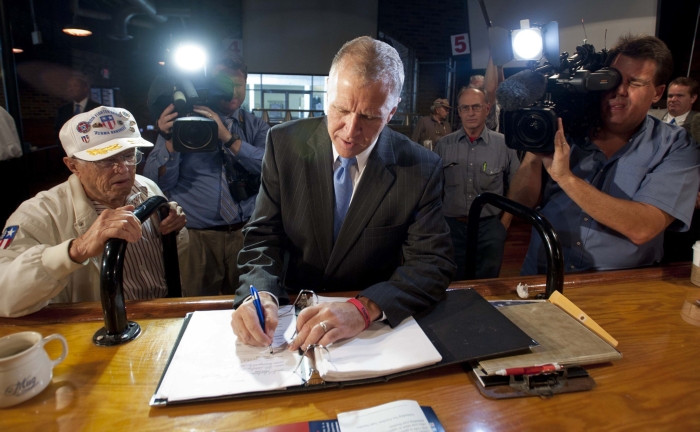 It was far from a normal Tuesday at Thelma’s.

Thom Tillis, North Carolina’s Republican Candidate for U.S. Senate, made a campaign stop at a weekly free coffee and doughnuts event for veterans at Thelma’s Down Home Cooking in the former Salisbury Mall. Tillis was joined by Vince Coakley, a candidate for the North Carolina’s 12th Congressional District seat, and U.S. Rep. Richard Hudson, who is running for re-election in the 8th Congressional District. All three politicians used the opportunity to express views on veterans issues.

Tillis said he chose to visit Salisbury and more specifically the coffee event because of the importance of veterans issues.

“In North Carolina, we have one of the highest military presences of any state and one of the highest populations per capita of veterans,” Tillis said. “Rowan County is an important area of the state and I live only about 30 minutes from here, so it’s close to home. We’re traveling across this 550-mile-wide state back and forth and this is one of the many visits we’ll make between now and (election day).”

Long before Tillis arrived, dozens of veterans were simply enjoying a cup of morning coffee. Then, Tillis’ planned appearance was officially announced. U.S. Sen. John McCain was initially scheduled to attend, but reportedly had a delayed flight and couldn’t make it.

For more than an hour, the only politicians in the coffee shop were a couple county commissioner candidates and Coakley. As veterans sipped coffee, Coakley was the first to speak.

Coakley began by asking the dozens of veterans in attendance to raise his or her hand if they felt like Washington was listening and addressing the appropriate issues. No one raised a hand

“That’s pretty sad,” Coakley said as he began laying out his platform. “As you know, I spent 18 years at channel nine, the ABC station, giving you the news and really for a good part of my time behind the desk I was frustrated because I’m watching as this country is going to hell in a handbasket.”

Tillis and Hudson arrived separately, about an hour after Coakley spoke. By the time Tillis and Hudson showed up, many of the veterans who attended the coffee event left. Though about 20 stayed. A gaggle of national and local media outlets were also at the event.

Tillis and Hudson both opened with a brief statement, but focused on veterans issues and spent most of the time answering questions from veterans in attendance.

Before introducing Tillis, Hudson said veterans should be able to receive care at any medical facility to increase the speed and quality of service.

“A veteran ought to be able to choose to get care anywhere in their community and the VA ought to pay for it, period,” Hudson said.

One of the several questions for Tillis came from Matt Cooke, a Stanly County resident who served in both the Army and Marines. Cooke was seriously injured during a 2009 shooting at Fort Hood and asked about the status of awarding a Purple Heart medal to those injured during the shooting and also how the shooting could be considered workplace violence.

Hudson responded first, saying Cooke is no different than any other combat veteran.

“It’s outrageous,” Hudson said about Congress’ failure to pass any kind of legislation. “We’ve passed it out of the house twice and Harry Reid won’t even give us a hearing. You deserve the same benefits of any combat veteran that’s wounded on duty.”

“We will send it to the presidents desk and dare him to veto it,” Tillis said.

While talking to media after his time with veterans, Tillis also briefly addressed the state of the former Salisbury Mall.

The three Republicans aren’t the only ones scheduled to be in Salisbury this week, as U.S. Sen. Mike Lee, R-Utah, will visit the Rowan county Republican Headquarters today at 1 p.m.