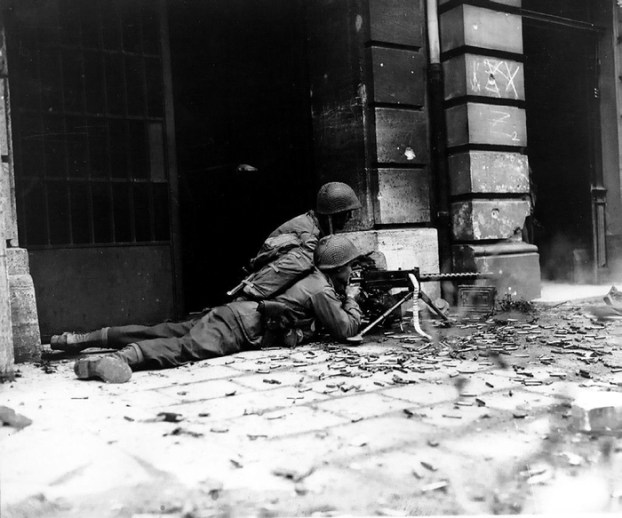 GIs man a machinegun during the Battle of Aachen

Rodney Cress: The Battle of Aachen

The Battle of Aachen took place between Oct. 2 and Oct. 21, 1944, and was considered a major battle and the first city on German soil to be captured by the Allies.

In this battle the Americans, 100,000 strong, were the only Allied force to battle the Germans’ 13,000 soldiers and the 5,000 national militia. The battle was one of the largest urban battles of the entire war and destroyed the city of Aachen. German defenses extended 10 miles in some areas and were protected with extensive minefields, bunkers and pillboxes and defended early on by the 116th Panzer Division, which was later replaced by the 1st SS Panzer Division and the 12th and 49th Infantry Divisions.

Most of the 165,000 citizens, mostly Catholics, had moved out as the Germans moved in, but it was later estimated that 40,000 may have remained, seeing the Americans as liberators. The Allied strategy was to encircle the city and pound it with air and artillery strikes, then move in the ground forces. As the American divisions moved into place, German command General Friedrich Koechling took charge of their LXXXI Corps, sending in the German 12th Infantry as reinforcements from the German Seventh Army. Soon, the two great armies would clash, pounding each other with all the weapons at their disposal. Americans organized special pillbox assault teams equipped with flame throwers, bangalore torpedoes, beehive munitions and demo charges. Flamethrower tanks destroyed the pillboxes, and bulldozer tanks buried them.

As American air power and artillery delivered over 300 tons of explosives on Aachen on Oct. 11 and 12, the 116th Panzer Division arrived to reinforce strategic areas of the city. This move led the 2nd Battalion to begin street and door-to-door fighting, followed by tanks to take out buildings firing on the U.S. soldiers. Urban battles became the focal point for success as each building taken over by the Americans would be one step closer to winning the battle. The Germans, however, defended their positions admirably as they used basements and sewers to counterattack, destroying American tanks with German anti-tank guns and holding the 30th Division to a standstill. It wasn’t until after linking with the 1st Division that Aachen was finally surrounded.

On Oct. 18, the final assault began against the SS Panzer Corps with the use of 155mm howitzers to blast the Germans into submission. Finally, on Oct. 21, 1944, at 1205 hours, there was a total surrender by the Germans. American casualties were high, with 3,000 from the 30th Division, 1,350 from the 1st Infantry Division, and 498 from the 26th Infantry. German losses included 5,000 causalities and 5,600 prisoners, losing the entire 246th Grenadier Division. The SS Panzer Corps lost half of its combat power.

It took six weeks for the Americans to surround the city in strategic locations but only 10 days to wipe out the Germans. Aachen, once a beautiful historic city, lost 80 percent of its buildings. Because of the victory at Aachen, Gen. Omar Bradley was able to move the 9th U.S. Army into the command that would then assist for the next bigger battle, the Battle of Hurtgen Forest.

Without question, American leadership, infantry valor and superior show of strength turned the tide on the Germans at Aachen. The Allies were now one step closer to the ultimate ending of the war in Europe in May 1945.

Rodney Cress is a Vietnam veteran and longtime advocate on veterans issues.

By David Freeze For the Salisbury Post A warm and beautiful Sunday afternoon was the perfect setting at Catawba College... read more