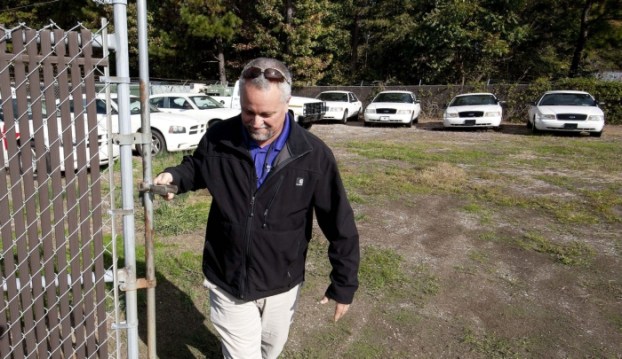 JON C. LAKEY / SALISBURY POST Rowan County gathers their surplus vehicles in a lot off Julian Road prior to being put up for auction. Gregg Seaford, an employee with Rowan County Facilities Management, at the surplus lot.

Overall, Rowan County government has 21 of its 265 vehicles set for surplus this year, an overwhelming majority coming from the sheriff’s office. The most recent example came this week when Rowan County’s Board of Commissioners voted to sell two vans used in the Rowan Transit System.

So far, the board of commissioners has approved the purchase of 26 new vehicles in 2014 — 24 for the Sheriff’s Office and two ambulances for the Department of Emergency Services — at a total cost of $945,262.

County government may plan to sell the surplus vehicles in advance, but the actual date vehicles are presented to commissioners has no time frame, according to county purchasing agent David Sifford.

“It’s just a matter of paperwork,” Sifford said in an email. “When I have all vehicles assembled in the surplus lot, I will get a final listing, ask the board of commissioners to declare them surplus and then I will turn them over to an auction company to hold a live auction.”

Surplus vehicles are kept in a small lot near the animal shelter, which, like the county’s list of vehicles to be declared surplus, is mostly composed of cars from the Sheriff’s Office.

The process for purchasing new vehicles begins during preparation for the budget year, when department heads make requests, Sifford said. The surplus and purchase process are on relatively similar timelines.

“When a new vehicle is purchased, it will be held until the vehicle it is designated to replace is taken out of service,” the guidelines state.

Rowan County’s declared mileage considered the maximum for each vehicle’s useful life is:

• 125,000 miles for county assigned vehicles, such as sheriff’s deputy cars

• The useful life for heavy equipment — 26,000 pounds gross weight or greater — is determined by individual departments.

Craig Pierce, county Board of Commissioners vice chairman, said the schedule of replacement allows departments to plan ahead and, in turn, know when to expect new equipment.

“It allows our department heads to make an informed decision if they are dealing with excessive repair costs,” Pierce said.

“It would not be unreasonable and that leaves some money in the pot to where if you have one that is a lemon you’ve got the money to take care of it,” Sides said. “When I have mentioned it in the past I’ve gotten a lot of kickback. Naturally, the people that are getting new cars want to keep getting new cars; they aren’t going to want to hold on to them longer.”

Sides said the current standards are working well and it’s unclear how a higher mileage limit might affect maintenance costs.

“I’m sure some people that buy (surplus cars) do it with the intention of patching them up, painting them up and selling them and making money,” Sides said. “So if we take one, sell it at auction and get $1,500 out if it, it’s probably worth more than that, but, if it’s a fair and open auction, then the public is the one setting the value, not us.”

By far, the Sheriff’s Office sells and buys the greatest number of vehicles, with 15 set for surplus and 24 vehicles approved for purchase this year.

But not all cars garner the same amount at auction and not all vehicles cost the same to maintain.

Of the vehicles set for surplus, seven are Ford Crown Victorias and four are Dodge Chargers.

Capt. Sam Towne, who oversees the Sheriff’s Office’s fleet of vehicles as part of his duties, said the Chargers routinely fetch more at auction than Crown Victorias. Towne said Chargers usually are bought for a few thousand, while Crown Victorias go for only a few hundred.

Sifford said any money received from the auction of vehicles is placed in a line item named sale of property. Selling various county property generated $108,328 in revenue in the 2014 fiscal year, according to the budget. The sale of property line item could include more than vehicles.

Towne said Chargers are the most expensive to maintain. Rowan County’s fiscal year 2015 budget states the average monthly cost of repairs for the Sheriff’s Office is just over $7,000 per month, leading to a yearly repair cost of about $84,000. The county budgeted for $82,000 in maintenance costs.

In total, county government allocated more than $145,000 for vehicle repair and maintenance.

The county doesn’t operate its own repair shop, instead contracting with Alligood Automotive on Fulton Street for any repairs.

Breakdown of county
vehicles and usage

Rowan County owns eight undercover vehicles that were redacted from the list given to the Salisbury Post. Towne said some of the vehicles may have been seized in drug investigations.

The second largest county department in terms of vehicles is the Rowan Transit System at 32, nearly all of which are Ford vans used to provide public transportation.

Other departments from greatest to lowest number of vehicles used include:

Of the vehicles, 14 are ambulances, eight are designated as service and one is listed as the airport’s fire truck.

All of the animal control vehicles are Ford trucks listed as service.

• Parks and Recreation at 10

All of the facilities management vehicles are designated as service vehicles.

All of the code enforcement vehicles are Ford Rangers and are designated as service vehicles.

• The Rowan County Library at five

• Planning and Development at three

The planning and development vehicles are designated as service vehicles and vary in make and model.

One of the vehicles is a 2013 Chevy Tahoe, listed as service. The other is a 1996 Thomas Bus, which is listed as the mobile command bus.

• The Rowan County Airport at two

One is a 2000 Buick Lesabre, listed as the airport’s courtesy vehicle. The other is a Ford F-150 and is listed as service.

The list of vehicles provided by Sifford also includes trailers, which total 20 across all departments. The only trailers not listed as service are in the Emergency Services Department. In emergency services, three are listed as generator trailers, two are listed as a disaster trailer, one as a hazmat trailer and one as a community emergency response team trailer.

Sifford said the county doesn’t have a specific policy on how employees use vehicles, but he provided two pages from the county’s personnel manual that address usage.

Approved commuters that are assigned vehicles can only use them to travel between work and home or to obtain meals and other work related necessities while on duty, according to the manual.

Like the county, Towne said the Sheriff’s Office doesn’t have specific policies on usage, but rather a general understanding among sheriff’s deputies and employees of what’s permitted.

Towne said sheriff’s deputies take vehicles home, but have to check onto duty any time he or she starts the vehicle.

David Purtell: Don’t forget about the rest of Salisbury

City officials, community and business leaders came together Thursday to celebrate another year of success in downtown Salisbury. The beer... read more