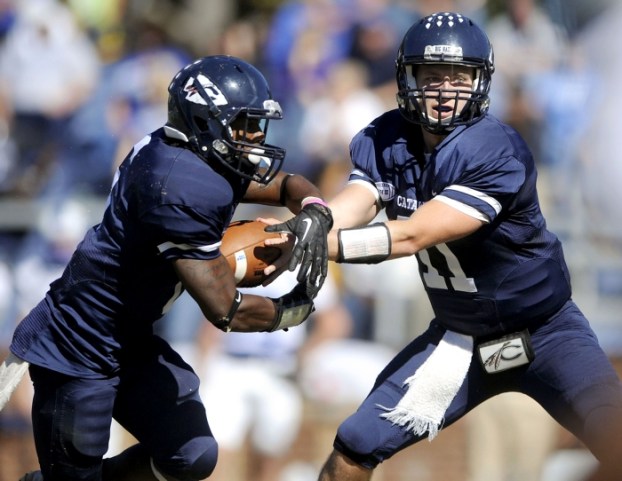 “I’d make a handoff, carry out my fake and I’d turn and see Brevard’s defensive linemen getting driven 10 yards downfield and Trey weaving in and out of them,” Catawba quarterback Mike Sheehan said. “Our offensive line was getting tremendous push.”

Mashore, a senior who starred at West Rowan, enjoyed a career day with 120 rushing yards on 16 carries and 172 kickoff-return yards. Catawba needed all of it to post a 42-37 win against Brevard.

“We talked all week about establishing the run and taking the fight to Brevard, and that’s what we did,” Mashore said. “Brevard’s offense is very hard to stop. We knew we weren’t going to get as many possessions as usual, so we had to make them all count.”

“Our running backs were awesome,” Catawba center Taylor Fender said. “Every possession was critical today and we knew we couldn’t afford to sputter much. The gameplan was to be the more physical team. We ran with that.

Homecoming at Shuford Stadium was happy, but barely. Catawba fans couldn’t breathe a sigh of relief until Brevard couldn’t move after taking possession at its 20-yard line with 1 minute, 37 seconds remaining.

The scouting report on Brevard was accurate. The Tornados (0-8, 0-5 SAC) have trouble stopping people, but their triple-option offense is clock-eating and efficient. Fullback Jordan Ollis, a 230-pound tank, bulled for 125 yards on 24 carries.

“Brevard’s lowest offensive output this season is 21 points and they scored 42 against Carson-Newman,” Catawba head coach Curtis Walker said. “We knew we had to play very well on offense. We knew we’d have to score a lot to win.”

Sheehan, the SAC’s leading passer, got back on track after a five-pick day at Wingate and a decent performance at UNC Pembroke. He was a perfect 13-for-13 passing for 157 yards and two TDs and he added three short rushing TDs.

“We got out of our offensive rut,” Sheehan said. “We were running the ball so well that it gave me a lot of time to throw. We didn’t have many negative plays,”

Sheehan hit a wide-open Burgess for a 53-yard TD and found leaping tight end Tyler Hamilton in the right corner of the end zone for a TD with 25 seconds left in the half for a 28-21 lead at the break.

Brevard scrapped within 28-24 in the third quarter, but the Indians answered with a scoring drive that Burgess finished from the 1-yard line.

“One of the things that’s going to show up on film was great blocking by our wide receivers on the edge,” Walker said. “Jason Williams made great blocks.”

Catawba had its chances to put the game away twice in the second half, but a roughing the passer penalty and a roughing the kicker flag extended Brevard possessions.

“When we finally got them stopped, we made mistakes that helped them keep the ball,” Walker said. “We had some learning lessons today. Fortunately, we were able to learn in a win.”

The defining moment came shortly after Brevard QB Tanner Wright scored on a 1-yard run with 10:14 remaining to cut Catawba’s lead to 35-31. Mashore fielded the ensuing kickoff at the Catawba 20 and enhanced his dazzling day with a darting 52-yard runback to the Brevard 28.

“We blocked that return just it the way we practiced it,” Mashore said. “I hit the lane hard and it opened up.”

Mashore’s return paved the way for another physical touchdown. Mashore got 15 tough yards on three carries as the Indians pounded the ball to the end zone to lead 42-31 with 8:02 left.

Brevard pushed for one more TD — taking advantage of that roughing the kicker penalty on a fourth-and-15 punt — but the clock and the lack of a passing game proved too much for the Tornados to overcome.

“We kept some of our season goals alive today,” a relieved Walker said.