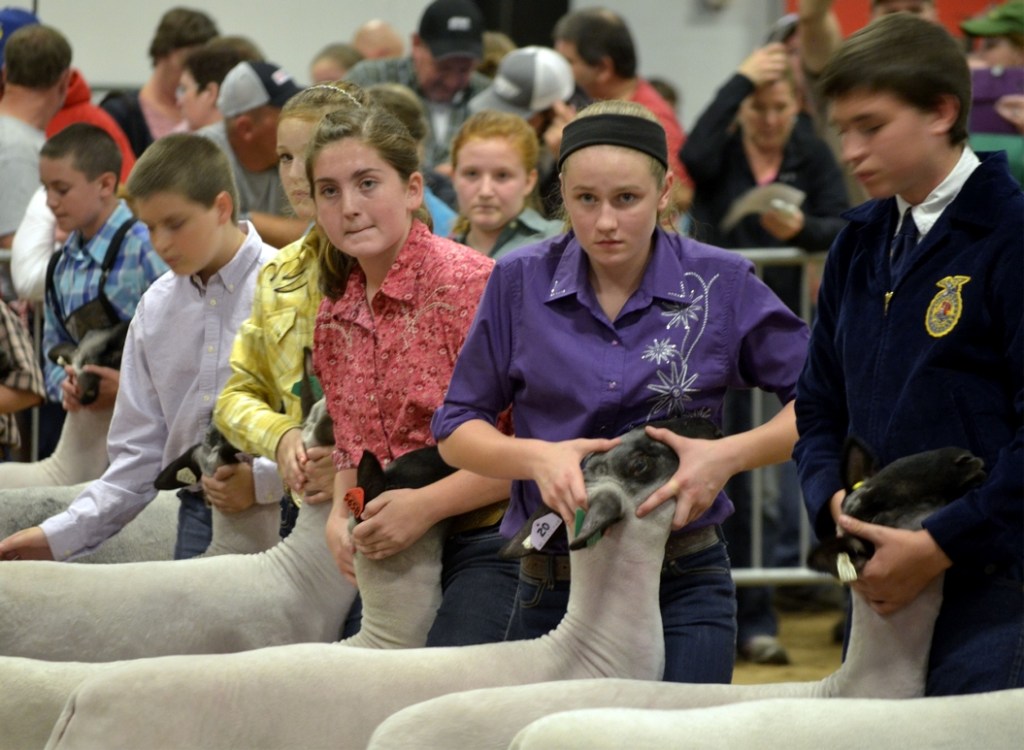 Many of them come for the food, the concerts and the midway rides.

But many more come to show their talents and their knowledge, from the livestock judging rings to the Village of Yesteryear — and Rowan County is well-represented among them.

On Thursday, the opening night of the fair, several Rowan County families had already gathered with show animals.

Inside an enormous tent, Henry and Cynthia Hampton walked among low pens full of sheep —freshly shorn, carefully groomed, some munching food. Many wore specially-made jackets over their own wool coats.

The Hampton family and relatives have been involved in livestock shows for some time, Cynthia said.

One of them was Lauren Hayes, 12, student at Corriher-Lipe Middle School.

Thursday, she stood with her mother, Erin, and several cousins in the waiting area with her commercial lamb entry — a big Hampshire cross with a black face and gray wool, not quite 10 months old.

“I’ve had her since July,” Lauren said — and those three months were full of washing, shearing, feeding and training for competition.

Hayes and the others were entered in the sheep showmanship judging, which doesn’t rate the lambs, but rather how the children work with them.

As they walk into the sawdust of the judging ring, each contestant holds the lamb steady, making sure it stays still with its feet properly placed for judging.

Contestants also have to move their lambs around the ring steadily, keeping control of them — no easy task in a noisy fair exhibition hall.

Matthew Connolly, 9, walked through the list of things that ran through his mind during his last judging round in the novice division.

“Just keeping the sheep set up, making sure I’m on the opposite side of the judge,” Connolly said. “Looking confident, always looking relaxed.”

When it was over, Matthew had won reserve champion while his cousin, Joshua Wilson, also age 9, was named champion.

Corrie Connolly, Matthew’s mother, said she’d hoped that the boys would do well. “It’s just like watching sports, for the parents,” Corrie said. “They get very competitive.”

Outside the sheep pen, Wilson smiled and said he was glad to have been chosen.

“It feels like a relief that you won, that all that hard work finally paid off,” Wilson said.

While the boys were celebrating, Hayes made her way into the ring, along with Matthew’s sister, Cindy, and Abigail Wilson — all age 12.

All three made it to the final round, and though they weren’t named champions, they spoke positively of the experience.

It’s something that makes their families proud, too.

Erin Hayes pointed to the girls and their sheep. “Rowan County has very good agriculture,” she said. “For the most part, it has to do with these kids right here.”

Abigail said there’s competition among the kids at the fair, but there’s also a sense of community — “people who get what you’re going through,” she said.

And the girls agreed that they wished more people understood the importance of farming and livestock.

“Food doesn’t just appear on your table,” she said. “It takes a lot of work, and it takes people working every day.”

Lauren said she hoped some of the kids in the crowd would be inspired to learn about farming and agriculture themselves, even if they don’t get involved in competition.

From farm to table

Jen Kendrick, spokesperson for the N.C. State Fair, said that education has always been a key mission of the annual event.

“The State Fair started because of agriculture,” Kendrick said. “It was built because farmers didn’t have the Internet, and many didn’t have college degrees.”

“The fair, at that time, gave (farmers) an opportunity to learn practices, to educate other farmers,” Kendrick said.

More than 160 years later, the situation is almost entirely reversed. Kendrick was one of many who said that people today need to understand where their food comes from — a journey that’s a lot longer than a trip to a grocery store.

“We really want them to have a one-on-one experience with agriculture,” Kendrick said.

Those sorts of experiences are what farmers like Justin Teeter, a native of Mt. Ulla, say will keep agriculture alive in North Carolina.

Friday night, Teeter was named champion in the Senior Plus division of the junior beef showmanship competition.

As with the sheep showmanship judging, Teeter was scored based on his control and presentation of the cow, a 22-month-old Angus.

Teeter, now a student at N.C. State University, grew up on the Green Hills Gelbvieh farm, owned by Walter and Lee Teeter.

Justin started showing cattle at age 4. The Teeters and family friend Ryan Menius are in Raleigh for both showmanship and cattle judging for several days this week.

“We’ve won in showmanship, my family, and won champions at national levels and here,” Justin said. “It takes a lot of work, a lot of early mornings and late nights.”

“This morning, my little brother and Ryan showed steers,” Justin said. “We were up at 4 a.m., and we went to sleep last night at midnight.”

Teeter said there’s more at stake when showing cattle at this level than just banners and trophies. For his family’s farm, it’s a chance for publicity — to help show what their bloodlines look like and call attention to their quality.

More than that, Teeter said, it’s a chance for the public to see how well farmers actually treat their livestock.

“That’s one of my big things,” Teeter said. “There’s a problem with animal rights and PETA” — People for the Ethical Treatment of Animals.

He said that farmers like the ones seen at the State Fair take good care of all their cattle, not just the ones they show. Teeter said he hopes the public will see that and educate themselves about the facts.

And he, too, said he hopes more people will get excited about agriculture.

Beyond the “Field of Dreams” agriculture exhibit, the flower gardens and the livestock judging, there’s a lot more to learn at the State Fair.

The Village of Yesteryear exhibit includes arts and crafts exhibits, as well as antique farm equipment and memorabilia.

As one of the smiths turned a hand-crank to blow air onto a bright coal fire, Sabo put on his apron, then drew a glowing red-hot metal rod from the flames.

Carrying it to the anvil, he proceeded to start shaping the end into a point.

Other smiths made everything from decorative hooks to iron nails. The room next to the forge is full of items on display and for sale.

This is Sabo’s first year at the State Fair. Most years, he’s been an athletic trainer for the East Rowan High School football team. This year, after about 25 years working with metal, he’s joined fellow smiths to demonstrate the craft.

“There’s a lot of interest,” Sabo said. “A lot of people want to know the basics.”

As a steady stream of onlookers paused by the windows of the forge, Sabo gestured toward the crowd.

“You’ll hear the older folks talking. They smell the smoke and know exactly where they are,” Sabo said.

“They’ll tell you how they remember turning the blower for their father or their grandfather … and these are 70- and 80-year-old people.”

In the old days, a blacksmith could repair pots and pans, fix wagon wheels and even make farm equipment.

Before he was known for tractors, “John Deere was a blacksmith,” Sabo said.

Elsewhere in the Village of Yesteryear, trades including woodcarving, basketmaking and pottery were on display.

And, for a few days, Sabo said, he’s glad to be a part of sharing the knowledge he’s learned through the years with the thousands who’ll come to the fair.