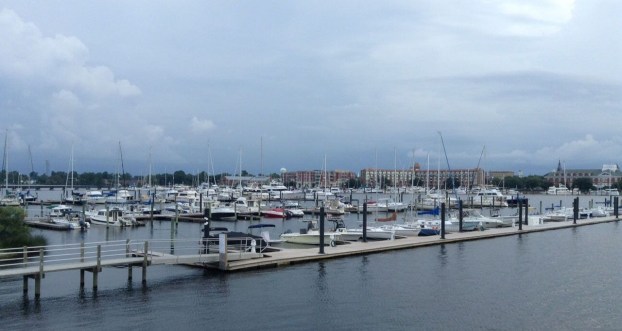 New Bern, at the confluence of the Trent and Neuse Rivers, was a thriving port through the 1800's. The current marina houses boats for fishing, tourism and pleasure. Photo by David Freeze, for the Salisbury Post.

A few weeks ago, I had the opportunity to visit New Bern on a mix of business and pleasure. During my Maine to Florida bicycle ride, I had only a short visit to North Carolina’s second oldest town. While I had planned to spend at least a couple hours looking around, all of my time in New Bern was used for a major bike repair on a late Saturday afternoon. By the time the repair was done, I had to pedal hard to make it to my overnight lodging about 10 miles away by dark. I felt as if I had missed something special.

I set out to get a real feel for New Bern on my September visit. I drove there this time with my bike in the back of the truck, but this visit was about more than biking. The owner of Flythe’s Bike Shop told me that a favorite saying of locals is that New Bern is situated “at the confluence of the Trent and Neuse Rivers.” That sounds a little haughty, but I found New Bern to be very friendly and filled with lots of easily affordable things to do.

The best place to start a visit to New Bern is the beautiful new visitor center. It was pouring rain so hard when I drove into town that I found a parking place and waited out the rain while looking over the beautiful waterfront park situated across the street.

Inside the visitor center, I found one of the best displays of pertinent tourist information that I had seen anywhere over my travels. At the time, a trade show was being set up in the same large building. I gathered a bag full of that information on the things that interested me and then stopped by the office to have one of the staff members fill in a few gaps and answer some specific questions about the handouts.

New Bern holds many firsts for North Carolina, including the first colonial capital, first bank, first post office and first chartered fire department. The town was founded in 1710. The centerpiece of the downtown area is Tryon Palace, the state’s first capital. The palace has 16 acres of buildings, gardens and plenty of antiques worth exploring. Streets offer plenty of easy walking among shops, restaurants, and historical homes.

Other history abounds throughout the town. One of the most popular attractions is the drugstore where Pepsi Cola was invented. Pepsi was originally called “Brad’s Drink” and was formulated in 1893 as a digestive aid that also had a pleasant taste. Nothing harmful was included in the ingredients and just five years later the new name for the product became Pepsi, short for “dyspepsia” or upset stomach. Visitors are encouraged to stop in and get Pepsi Cola at a historic fountain setting that is surrounded by a busy gift shop.

One more historical part of New Bern especially interested me. Early fire department equipment was first pulled and operated by manpower. Response to fires required 16 men to pull a wagon with a pump that was powered by eight men. River water or well water was pumped to battle the fire. During the Union occupation of New Bern in the Civil War, soldiers led the fire response because most of the local able bodied men were off fighting for the Confederate forces. There is a very interesting Firemen’s Museum in the downtown area, with plans to move soon to a much larger former firehouse.

I spent quite a bit of time walking, running and biking around the downtown area. My focus on this trip was to explore the city the way that a tourist might while still hoping to do some of my favorite activities. There were heavy rains much of the three days that I was in town, but between those rains I hit the roads and streets.

Now that I have been in so many small tourist towns, I found New Bern remarkable in several ways. The streets are laid out in an easy to follow pattern, and traffic never was much of an issue. It is almost as if time slows down when you arrive in New Bern. Walking and bicycling are extremely popular, with multiple sites offering reasonably priced rentals on the big and comfortable old style bikes.

There is a still significant Revolutionary War era presence in the town. At that time, it was the largest town in North Carolina and the colonial capitol. There are at least six houses remaining from the 1760-1775 time period, as well as the Tryon Palace. President George Washington visited here in 1792.

New Bern is also surrounded by a wealth of Civil War history. New Bern was a major port and trading center in the 1800s. A large Union army under General Ambrose Burnside captured New Bern following a fierce battle on March 14th, 1862. Union forces occupied New Bern for the remainder of the war despite several attempts by Confederate forces to retake the city.  Multiple houses, churches and schools were commandeered for use as headquarters, accommodations, a hospital and even a jail for Confederate sympathizers.  There are plans to make the battlefield area into a major park.

Other sites of historical note include the New Bern National Cemetery, started just after the Civil War. Union soldiers and veterans of later wars are buried here.

Many New Bern sites have been mentioned in the books of Nicholas Sparks, a high profile local resident. Former North Carolina Governor Bev Pardue also maintains a home along the Trent River.

One of the unusual things that visitors will quickly notice is that there are custom artistic bears in many locations around the town and on the police cars and other municipal sites. New Bern celebrated its 300th anniversary in 2010 and those bears are symbols of that event.

Croatan National Forest is next door and offers camping, hiking, fishing and canoeing on 160,000 acres. Wildlife likely to be seen include black bear, turkeys, deer, alligators, and ospreys.

I loved spending time in New Bern and actually enjoyed that slightly slower pace more than I expected to. Accommodations are affordable and other interesting coastal towns are close by. New Bern is about 235 miles east of Salisbury and is populated by just over 30,000 residents.

By Marny Hendrick sports@salisburypost.com MOUNT ULLA — It was a game that defied logic, and it was all but over... read more