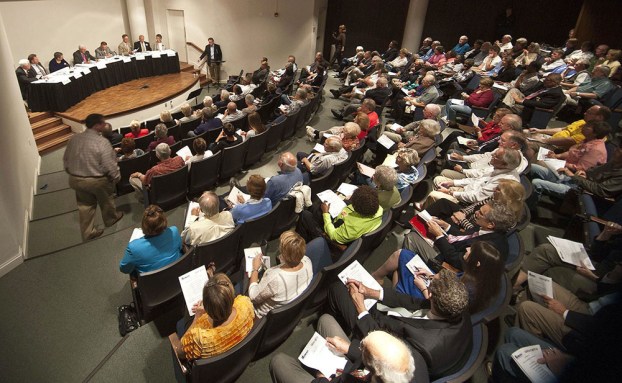 JON C. LAKEY / SALISBURY POST The eight candidates vying for three seats on the Rowan County Board of Commissioners gathered for a forum at Catawba College on Thursday.

Commissioner forum centers on cooperation with other elected officials

If Thursday’s Rowan County commissioner forum was any indication, candidates are chiefly concerned about reducing political bickering between other elected officials.

Regardless of the question, easing tension among the board of commissioners, municipalities in Rowan county and the school board seemed to be a part of a candidate’s answer. Questions asked during the forum at Catawba College covered an appeal over a special use permit for the former Salisbury Mall, cooperation with other elected officials and jobs.

Each candidate began with an opening statement, which was mostly used to introduce themselves and speak briefly about improving Rowan County. Then, moderator and Catawba Politics Professor Michael Bitzer divided candidates into two groups and alternated between the two, asking questions submitted by Rowan County residents. A different question was asked to each group of candidates.

Improving relationships was even a direct question at one point, when Bitzer asked how the candidates would work with the school board and the City of Salisbury. Multiple candidates said commissioners should recognize their role and understand their jobs.

Unaffiliated candidate Gene Miller said getting along with others was a frequent topic of conversation when he was collecting signatures to get on the ballot.

“When I was traveling around back in February and March, talking to folks about my candidacy and trying to get a petition filled out, there were a couple of major themes that kept coming forward,” Miller said. “One of the things they talked about was can you get along with other elected officials. Why is it that as a commission we have to be in conflict with the board of education and have to be in conflict with the City of Salisbury? We’ve got to put civility back in county government.”

When talking about relationships between government entities, Republican Judy Klusman described different agencies that she has worked at as evidence that she can collaborate with others.

“I believe that we can be civil and communicate, cooperate and collaborate because that’s what people in our county are asking of us,” Klusman said.

Many candidates even attributed Rowan County’s current economic state to bickering between elected officials when asked if a poor education system was a contributing factor in a high unemployment rate.

Democrat Leda Belk said the school system, including Rowan-Cabarrus Community College, is performing well. The best way for the county to improve its economic state is through communication, Belk said.

“We don’t have that open-door policy between the commissioners and education people to ensure that the proper training is taking place,” she said.

Republican Greg Edds disagreed with other candidates’ assessment, saying schools and education were, in fact, a primary way to boost Rowan County’s economic state. Though he said 50 to 100 other factors contribute to the area’s economic state.

“It’s not just cantankerous leadership, it’s not that we can’t seem to get along and it’s not just the schools,” Edds said. “It’s the whole package and that’s why we have to focus on really building a plan. The number one thing folks are looking for is a trained workforce.”

A large portion of the forum also focused on the former Salisbury Mall, which nearly every candidate said should have been planned better and may not have been a good purchase. Both candidate groups expressed opinions on the overall state of the mall and its purchase.

Unaffiliated candidate Chris Cohen was the only one who described the former mall, now West End Plaza, as a “good buy,” comparing it to buying stock in a company.

Cohen’s question, and the question to the entire second group of candidates — Belk, unaffiliated candidate Raymond Coltrain, and Edds — was whether he or she agreed with the commissioners’ appeal of a special use permit.

Cohen didn’t directly say that he agreed or disagreed with the appeal, but said the county and city should work together to come to an agreement.

Coltrain also didn’t directly say he disagreed with the appeal, but echoed Cohen, saying commissioners “should leave their egos outside the door.”

Belk and Edds, the other members of the group, also focused on working with the city of Salisbury as a better way to figure out a solution for the West End Plaza.

The question to the first group of commissioners was about the best use for the West End Plaza. After briefly addressing his discontent with the way Rowan County government purchased the mall, Democrat Rick Locklear said he’d like to see a committee, composed of local residents and business owners, address the future of the former mall.

“Salisbury has a wealth of talent here,” Locklear said. “We need to incorporate those individuals in getting us new ideas and don’t just look to elected officials and politicians for all the answers. Incorporate the talent that’s here and the business people here that have been successful in business.

Republican Jim Greene also suggested getting input from others to decide the future of the former Salisbury Mall.

Klusman and Miller both said the mall was a bad purchase. Miller said he was open to suggestions. Klusman proposed a few ideas, including a call center and a skateboard park.

The forum wrapped up with closing statements, where candidates talked about achieving excellence in Rowan County.

One is a former Navy seaman, the second is a small business owner and partner in an auction company and... read more