School board hopefuls face off at candidate forum 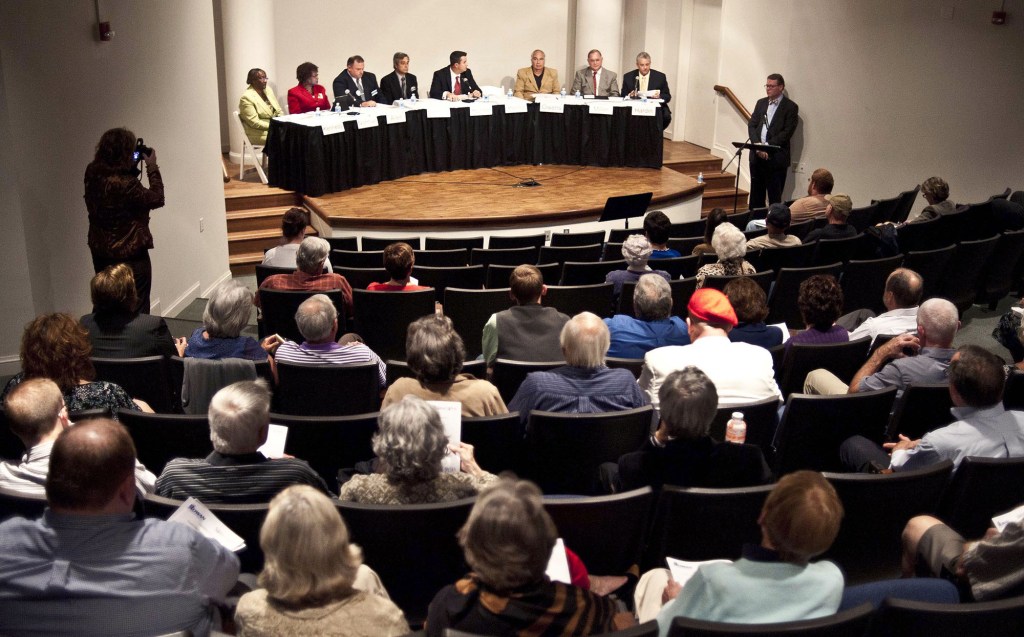 Eight of the nine Rowan-Salisbury Board of Education candidates gathered Tuesday at Catawba College for a candidate debate moderated by Dr. Michael Bitzer.

“The core of participatory democracy is an educated citizenship,” Bitzer said. “Through events like this, we do our part.”

The candidates were given the opportunity to present opening and closing comments, as well as answer several question. They were given two minutes each time they spoke.

The questions, which were submitted to the Salisbury Post by its readers, covered policy, the consolidated central office, diversity, budget cuts, relationships with other governing bodies and preparing students for 21st century jobs.

Bitzer introduced a new question after each candidate for one seat had an opportunity to answer.

Hardin, a retired educator with more than 30 years of experience, said he wants to help the board “refocus” on the priorities of student and teacher success.”

He said that budget cuts force a district to look at its priorities and to find grants to bring in more funds.

Dr. Richard Miller, the current chairman of the school board, said that over the four years he’s served on the board, they’ve “set the stage” for excellence and equity” among the community.

He said the staff retention is a “high priority” for the current board, and that recent staffing cuts were a result of funds that were cut by the state legislature.

“The school board has absolutely no authority for generating monies,” he said, adding that there comes a point when everything else has been cut so far that “personnel is the only place to go.”

Owens stood firm on his belief that school system funding should be cut.

“I won’t vote for one more cent for education,” he said. “We do not reward failure – we reward success.”

He added that he feels students should be prepared to “leave the school system and get a job.”

He proposed cutting costs by being energy conscious, cutting down bus routes and phasing out highly-paid administrators.

“I’d be ashamed to show my face as bad as things are. If I am elected and things do not improve, I will not run for reelection,” he said.

“I have a vested interest in failure or success of our school system,” Hunter said, explaining that his wife is a teacher, his children are nearing elementary school and many of the students he pastors attend the district’s schools.

“I did not get in this race because of social issues,” he said, adding that he decided to run a year ago.

While Hunter said he believes there is a legitimate need for a central office, he feels the current board is making the district’s administrators a priority over its students.

Overcash, who served on the board in the late 90s and for the past two years, said he wants to see the board’s current initiatives through to completion, including the district’s strategic plan, one-to-one technology initiative and energy performance contract.

“I’m not a politician and I’m not a public speaker, but I do know hard work,” he said.

Overcash said a central office is a “necessity.” Under current conditions, the board is wasting time, energy and mileage.

“The power bill alone is astronomical,” he said. “It’s a no-brainer that we’ll save money.”

“I believe that traditional education is not dead,” he said, adding that test scores fall as the district strays from those methods.

While he acknowledged that technology is good, he also said it was important that they didn’t neglect the fundamentals or get rid of classes like masonry and carpentry.

Relationship is the “key ingredient,” he added. “We try to replace relationships with other things.”

Allen also said the district’s priorities should be on the consolidated elementary school and Knox Middle, rather than a central office.

Norman has nearly 20 years experience on the school board, and currently serves as vice chair.

“Poverty is not an excuse for not learning,” Norman said, adding that many of the needs stretch across the poverty line.

“We still have a problem with literacy,” she said.

She added that technology is “the world of our young people,” and that it, along with critical thinking and problem skills are key to preparing students for 21st century jobs.

“We need to feed the mind, the body and the spirit,” Kennedy said when asked how to create equal learning opportunities for students of poverty.

“I was a child of poverty – the only difference is, no one told me I was poor,” she said, adding that she overcame poverty through her insatiable desire to learn.

Education can’t be uniform across the board, she said, adding that they must be able to teach to meet different needs.

The forum, which was sponsored by the Salisbury Post, Rowan County Chamber of Commerce, WSAT and Catawba College, will be rebroadcasted on channels 16 and 22 before the election.