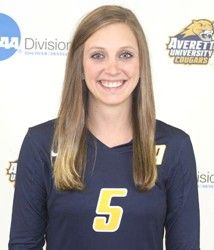 The setter averaged 11.7 assists and 2.6 digs per set as Averett won two of its three games.

This is the third time in her career that Barringer has been the USA South Player of the Week.

Averett’s Lynsey Corriher (South Rowan) had four kills and two digs in the win against Ferrum.

• Michaela White (Carson) had 17 assists and three digs, but the Charlotte 49ers were swept by Florida International in a Dig Pink game at Halton Arena on Friday.

• Hollins’ Lela Moore (West Rowan) had 18 assists and five digs in a loss to Washington & Lee.

In UNC’s 50-43 loss at Notre Dame on Saturday, Romar Morris (Salisbury) had three receptions for 59 yards, including a 26-yard catch. Morris had one carry for 5 yards.

Damien Washington (A.L. Brown) made a tackle for the Tar Heels.

• South Carolina State’s Javon Hargrave (North Rowan) made four tackles, including a sack for a loss of 8 yards in Saturday’s 48-35 loss to N.C. Central.

Hargrave has eight sacks and 14 tackles for loss in seven games.

• Virginia was off Saturday and heads to Duke for a key ACC game this weekend. The Duke-Virginia rivalry dates back to 1890.

• Charleston’s John Knox (Salisbury) moved to a receiving role on Saturday and had eight catches for 81 yards in a 34-30 loss to Glenville State. Knox caught a 27-yard TD pass to give Charleston a 30-27 lead with 2:15 left, but the Golden Eagles couldn’t hang on.

• In Catawba’s 30-19 loss to Wingate, Jamal Lackey (Davie) made seven tackles. Mark McDaniel (South Rowan) had an interception to stop a Wingate drive and also broke up two passes.

• Tusculum’s Emmanuel Gbunblee (West Rowan) had a sack, a fumble recovery and four tackles as the Pioneers surprised Newberry 16-14.

• Limestone’s Logan Stoodley (West Rowan) had four tackles, one for loss, and a fumble recovery  in a 47-30 win against Paine.

• UNC Pembroke’s Cadarreus Mason (South Rowan) had three tackles, one for loss, in a 27-6 loss to North Alabama.

• Adam Smith (Davie) had another huge day for Guilford in a 47-31 loss to Shenandoah. The former Davie QB caught five passes for 149 yards. He had scoring receptions of 21 and 64 yards. Smith has 10 TD catches this season.

Gardner-Webb’s Jake Kennedy (West Rowan) shot 74 on Monday in the first round of the Donald Ross Intercollegiate at Morganton’s Mimosa Hills.

• George Mason’s Eric Edwards (Salisbury) shot 78 on Monday in the first round of the Maryland Terrapin Invitational.

• UNC Greensboro’s Roy Dixon (Salisbury) shot 70-72 — 142 in Monday’s first two rounds of the AutoTrader.com Collegiate Classic in Georgia and is tied for 11th.

• Davidson’s Alex Nianouris (Salisbury) also is competing in the AutoTrader.com Collegiate Classic and shot 73-76 — 149 in the first two rounds.

Mariah Coleman (West Rowan) had an assist for Wingate in a 5-0 win against Coker.