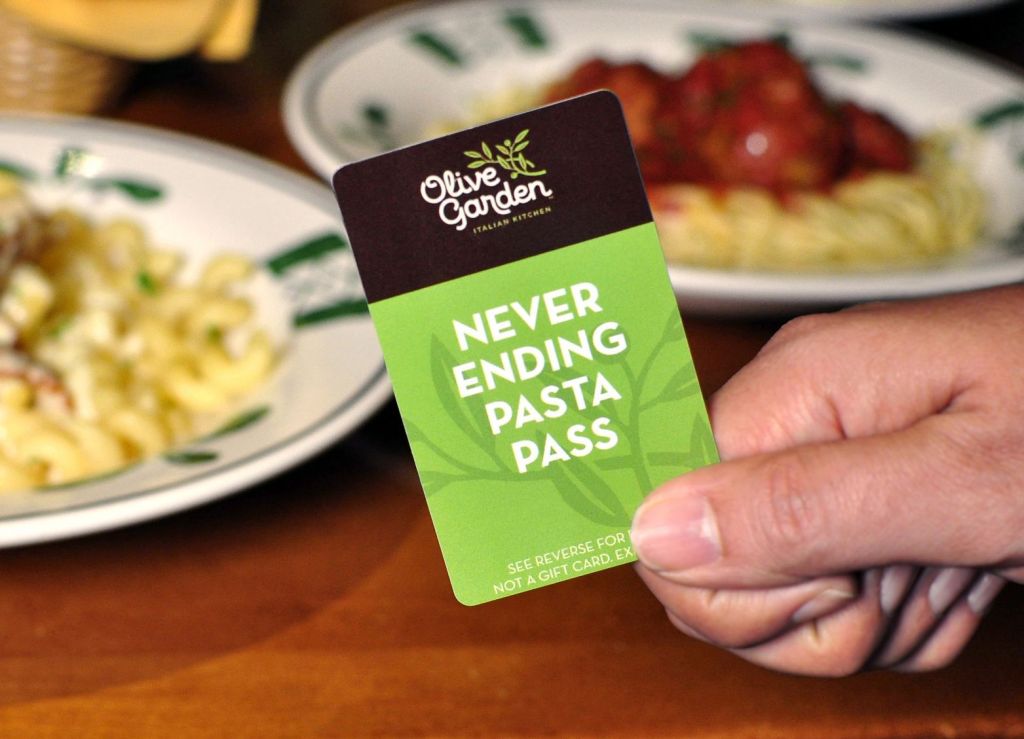 NEW YORK (AP) — The “Never Ending Pasta Pass” card from Olive Garden not only promised weeks of unlimited pasta, but a look into why the chain is fighting to hold onto customers.
The Italian-themed chain sold the $100 card last month that allowed 1,000 people to dine on endless pasta, breadsticks, soup and salad for 49 days. The passes sold out in less than an hour, with some turning up on eBay for hundreds of dollars.
It was a successful publicity stunt for Olive Garden’s parent company, Darden Restaurants. But the company’s troubles aren’t over: It’s fighting to hold onto customers, with sales at its flagship chain declining for each of the past three years. On Friday, activist investor Starboard Value succeeded in its bid to replace all 12 of Darden’s board seats with its own slate of nominees.
Starboard said it’s looking forward to working with Darden’s management to improve results for shareholders.
Darden had already been making changes to turn around business. That includes modernizing its menu with “small plates” like crispy risotto bites and updating its marketing.
To get a firsthand look at Olive Garden’s troubles, I paid for a Pasta Pass. I mostly enjoyed my meals, but the reactions of my companions shed some light on why the chain is struggling. Some think the menu is overwhelming and the service is slow. Others feel bad about eating all the empty calories.
And one colleague who ordered the meat lasagna said: “I can make this at home.”
Olive Garden has become a punchline in some circles that don’t see it as serving authentic Italian food. One night, I asked my fellow diners what they thought about the criticism.
Eric McGarvey, 40, said he considers Olive Garden’s food to be “American Italian” and likes the consistency it provides.
I found the food to be tasty too, if basic. My main complaint is that the noodles are on the soft side, but others might not prefer their pasta al dente. The bigger issue is nutrition; My go-to dish of corkscrew pasta with meat sauce and meatballs probably wasn’t the best option. The dish is 920 calories.
Olive Garden did add a “Lighter Italian Fare” two years ago with options that include a chicken breast served with potatoes and spinach at 550 calories. But those aren’t part of the pasta promotion.
That does, however, bring me to another problem Olive Garden has: an overwhelming number of options. Executives acknowledge the need to simplify the menu, which has been criticized for mushrooming to nearly 100 items, including burgers. Still, Darden president Eugene Lee recently said it’s hard deciding what to get rid because “everybody has their favorite.”
The other common complaint among my companions was that the prices are too high, with dishes like Fettuccine Alfredo costing $18 in New York City. A steak and potatoes dish cost $30.
Olive Garden notes prices vary by market but that in most places, those dishes cost $9.49 and $19.99, respectively.
Still, Olive Garden acknowledges it needs to get better at offering value. In fact, the Pasta Pass was intended to promote its Never Ending Pasta Bowl, which lets people eat as much pasta as they want in one sitting for $9.99.
That promotion has run every year since debuting in 1995. Like other aspects of its business, though, Olive Garden has acknowledged that it hasn’t been as effective as it could be. As a result, the promotion was pushed to late September this year, instead of early August.
Jay Spenchian, Olive Garden’s executive vice president of marketing, said Olive Garden realized the idea of a hot bowl of endless pasta isn’t as appetizing when it’s hot out.
The Never Ending Pasta Bowl is Olive Garden’s most popular deal, but I never saw it advertised in the restaurants. That’s likely because the chain doesn’t want to distract customers who are likely to pay more for something on the regular menu.
While it may make sense from a business perspective, it was inconvenient and confusing. I had to look up the options for pasta, sauce and toppings available on my phone or ask the waiter.
Another problem? The Never Ending Pasta Bowl made Olive Garden’s regular prices in New York seem more inflated. Just a single plate of pasta and meat sauce costs $17 on the regular menu.
A waiter told me on one visit that a man at a nearby table was on his seventh bowl, so maybe he got his money’s worth. But Olive Garden said about a third of people don’t even ask for a second plate.