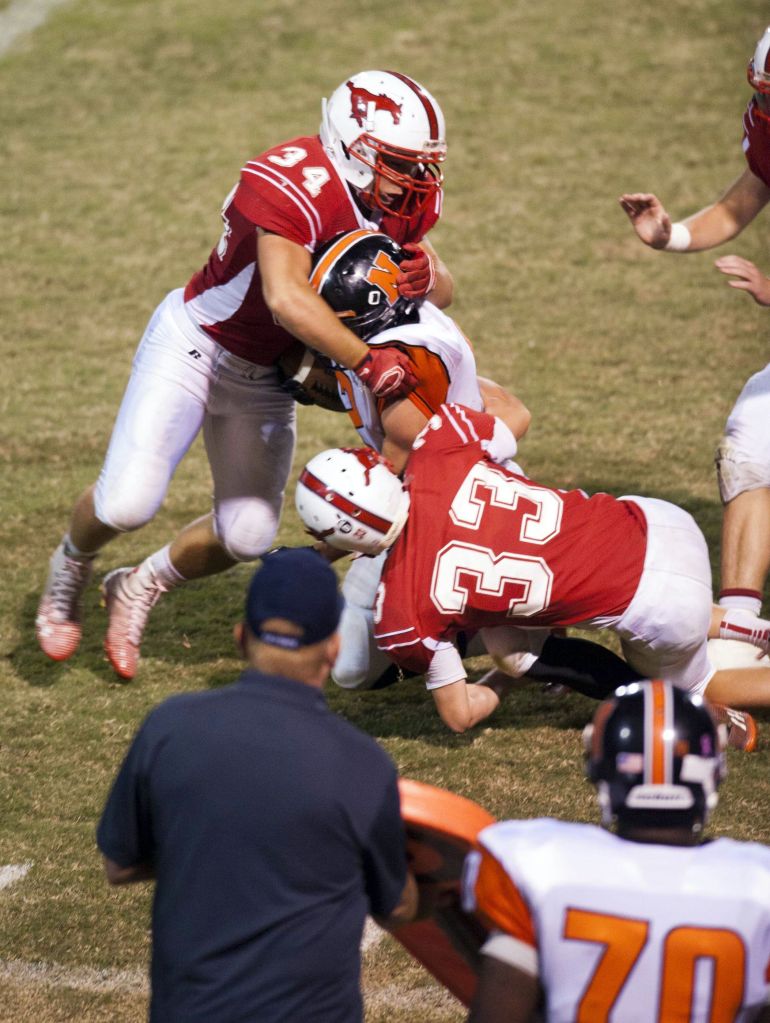 GRANITE QUARRY — Homecoming Night provided a skyful of memories for East Rowan on Friday.
First, the Wyrick brothers put on another pitch-and-catch clinic, connecting nine times in the Mustangs’ 50-6 South Piedmont Conference victory over visiting Northwest Cabarrus. Then Mother Nature took center stage, forcing all involved to wait out a two-hour lightning delay with 8:36 remaining in the third quarter.
When the skies cleared East (3-4, 2-3) put the finishing touches on a lopsided, mercy-rule win — one the Mustangs needed to remain in the hunt for a state-playoff berth.
Senior quarterback Sam Wyrick completed 15 of 20 passes for 216 yards and three touchdowns — each to his twin brother Seth. He scrambled for two other scores.
The game opened with an onside kick that was recovered by East Rowan’s Wesley Porter near midfield. That opportunity fizzled when Sam Wyrick’s first pass was intercepted by Trojans linebacker Nathan Clark.
But this was a night when East stumbled down the stairs in the first period and somehow landed on its feet. Twice in the first quarter it turned over the ball, yet thanks to a defense that forced three turnovers, East Rowan mounted a 15-6 lead. Sam Wyrick scored on a two-yard rollout just 3:01 into the game. Moments later, he spiraled a 6-yard TD pass to Seth Wyrick, who was wide open on the right side.
East Rowan padded its lead to 29-6 by halftime as the Wyricks hooked up on a pair of touchdown plays. The first was a highlight reel catch that Seth made while sliding on the right side of the end zone. The second came on a 5-yard flip in the waning seconds of the half.
Following an extended halftime, East continued its assault in the third quarter. The Mustangs took the second-half kickoff and marched 76 yards in nine plays and made it 36-6 when Sam Wyrick scored on a play-option. He took a snap from center, faked a handoff to running back Max Wall and skirted untouched into the end zone.
That’s when a flash of lightning — the first of a dozen or so — forced officials to get both teams off the field. for 1 hour, 57 minutes. Downtime discussions included suspending the game until Saturday or Monday, or ending it at that point. When play resumed at 11:05 p.m. East Rowan cemented the outcome with two more touchdowns, including linebacker Shiheem Saunders’ fumble recovery in Northwest Cabarrus’ end zone with 7:35 to play. It gave the Mustangs a 44-point lead and by rule, the clock was running.
The Mustangs finished with 436 yards total offense while its defense limited the Trojans (1-6, 0-4) to 55 yards and four first downs. Trojans’ quarterback Kalan Chapman completed 8 of 12 pass attempts but was sacked three times.