Down go the Blue Bears 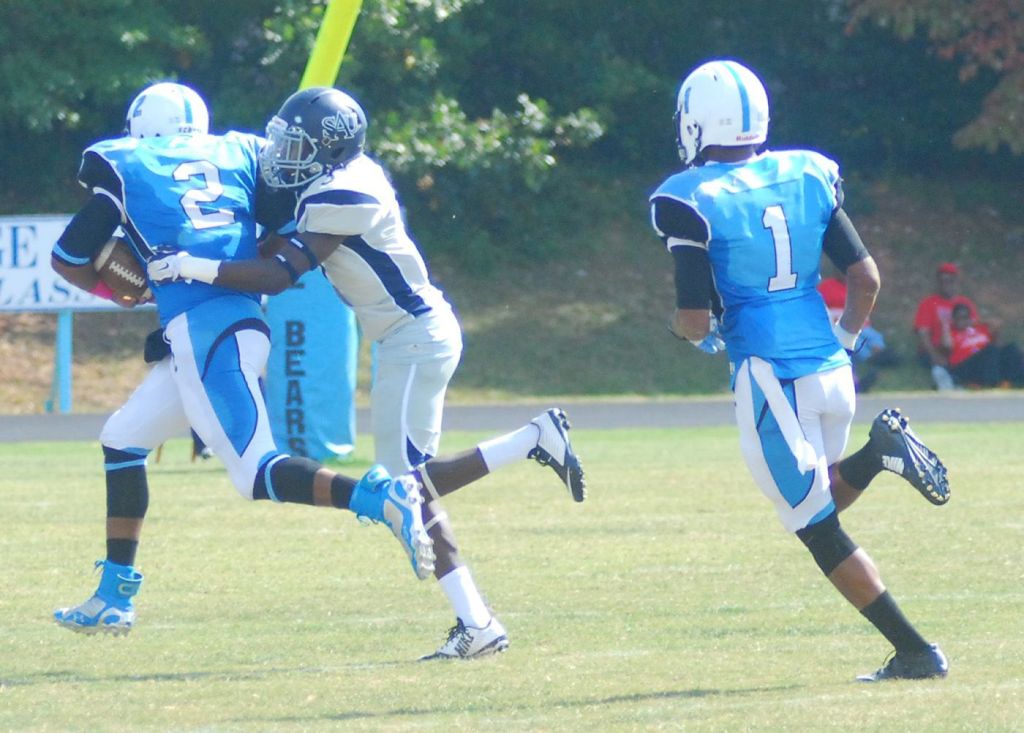 SALISBURY — Livingstone took an unexpected step backward on Saturday.
The Blue Bears were admittedly blindsided at Alumni Stadium, where St. Augustine’s crashed their homecoming party and earned a 31-30 victory.
“We definitely did not see this coming,” quarterback Drew Powell said after the jaw-dropping loss. “Everything was going our way and then oomph, we lose by one point. It’s tough.”
Livingstone (4-2, 1-2) was marching toward a potential game-winning play when it advanced the St. Augustine’s 28-yard line in the waning moments. But when Powell’s hurried, third-down pass was picked off by J.J. Cooper with 1 minut, 32 seconds remaining, the Blue Bears were left with more than just their egos bruised.
“We’ve got to take better care of the football,” coach Daryl Williams said. “St. Aug’s, they played a good game and my hat’s off to them. But it feels like last year, like we gave another game away.”
That’s a chapter Livingstone doesn’t want to discuss after winning its first four games this season. Defensive tackle Henry Horne insisted the mood in the team’s locker room will certainly improve.
“It’s not going to change us,” he said after LC’s defense forced three turnovers. “We’re still gonna put our heads down and continue to work hard. We’re not giving up because we lost a tough one here.”
Winning coach Michael Morand — a former Livingstone assistant — had high praise for the Blue Bears.
“My heart goes out to them,” he said. “I was here in 2002 when they weren’t very good. But now they’re a team to be reckoned with. That makes this win pretty special.”
In an ironic twist, St. Augustine’s (2-4, 2-1) may have clinched the victory after yielding a touchdown early in the fourth quarter. Anthony Green’s 20-yard TD burst up the middle snapped a 24-24 tie with 12:31 to play. But when Leonardo Manzo’s extra point attempt was smothered by Cooper on a jailbreak rush from the right side, it was the Falcons who celebrated.
“I just came over the edge and no one blocked me,” the senior defensive back reported. “Nobody ever does on the edge. They usually chip block or try to get a hand on you, but I went straight in.”
Down by six, St. Augustine’s used a three-and-out defensive stand to initiate its game-winning drive. It covered only 33 yards, took just six plays and was capped when fullback Justin Shaw plowed into the end zone on a 7-yard jam with 6:25 to go.
“The game was back-and-forth. That’s just the way it was,” Horne said. “To me, it was our own fault. The mistakes we made cost us. And then time ran out.”
Not before Powell — who ran for 188 yards and passed for 153 — and the Blue Bears made one final charge up the field. Livingstone’s last drive began at its own 41 with 2:23 on the clock and no timeouts available. On first down Powell hit do-it-all receiver Jalen Hendricks for 28 yards on a slant. Then came a 3-yard pickup by running back Justin Forte, followed by an incompletion on a pass intended for Hendricks.
Powell’s final pass of the day resulted in Livingstone’s 20th turnover of the season. The junior southpaw rolled out to his left, was pressured by a couple of defensive lineman and let a pass intended for Hendricks sail out of his hands. Cooper stepped in its path and made an easy pick.
“They brought a couple of extra guys on the last play,” Powell said. “I felt the pressure and made a bad play. It was all on me.”