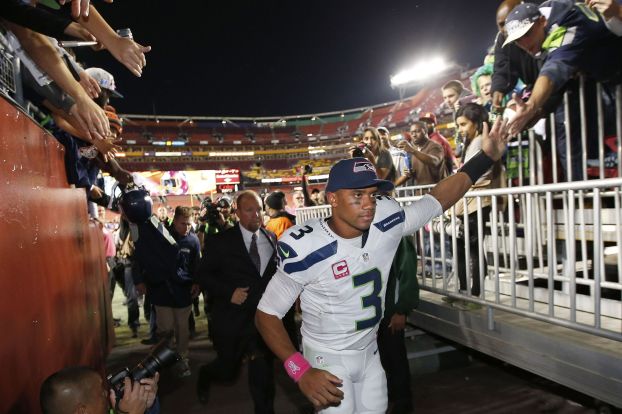 LANDOVER, Md. (AP) — For nearly a half, Seattle’s penalty yards outnumbered Washington’s total yards. Those self-inflicted wounds, more than anything, kept the Monday night game as close as it was.
Russell Wilson rushed for a career-high 122 yards on 11 carries, and the Seahawks survived their “neutral zone infractions,” holds, false starts and other miscues in a 27-17 win over the Redskins, extending Seattle’s tradition of dominance in prime time while handing Washington another deflating moment under the lights.
Wilson also completed 18 of 24 passes for 201 yards with two touchdowns for the Seahawks (3-1), who displayed an uncharacteristic lack of crispness coming off their bye. Seattle committed 13 penalties for 90 yards, including a holding, false start and unsportsmanlike conduct calls that wiped out three potential touchdowns by Percy Harvin.
How bad was the Seahawks’ penalty bug? It wasn’t until a 4-yard run by Alfred Morris with three minutes left in the first half that the Redskins’ total yards (47) passed Seattle’s penalty yards (45) for good.
Marshawn Lynch ran for 72 yards on 17 carries and didn’t enter the game until the Seahawks’ second series. He stood on the sideline, helmet on, during the first drive, and the team did not make an in-game announcement regarding any sort of injury to its leading rusher.
Seattle improved to an NFL-best 21-8 on Monday nights, including nine wins in a row. The team is also 11-1 in prime time under coach Pete Carroll. Washington (1-4), meanwhile, has dropped seven straight in prime time and is 4-15 on Monday nights since 2000.
The Redskins punted eight times, and two deep passes to DeSean Jackson accounted for 137 of the offense’s 307 total yards. Jackson beat Kam Chancellor for a 60-yard touchdown catch that cut Seattle’s lead to 17-7 late in the first half, and his 57-yard reception set up a field goal that made it 17-10 early in the third quarter. Jackson finished with five catches for 157 yards.
Kirk Cousins completed 21 of 36 passes for 283 yards and dropped to 1-6 in his career as a Redskins starter. Robert Griffin III missed a third consecutive game with a dislocated left ankle, but he made a cameo appearance before the game, wearing a skin-tight white shirt and pink sleeve on his left arm as he threw passes to Jordan Reed — who is also injured — on the sideline.
Wilson had plenty of green in front of him in the first half, whether it was a designed run or a scramble out of the pocket. He had rushes of 16, 29, 13 and 22 in the first two drives. He headed for the pylon on a clinical zone-read run for a 9-yard score in the second quarter, giving Seattle a 17-point lead.
It would have been 21-0 if either of Harvin’s touchdowns — on back-to-back plays — had counted in the first half. First, his 16-yard run to the end zone was wiped out by holding on left guard James Carpenter, then his 26-yard catch-and-run was negated by a flag for a false start on Harvin himself, a penalty that gum-chomping Carroll wandered onto the turf to argue.
Early in the fourth quarter, Wilson hit a wide-open Harvin for an apparent 41-yard score, but Carpenter was cited because he “hit a player on the ground unnecessarily,” according to the announcement by referee Jeff Triplette. Carpenter was guilty of blocking a Redskins player who was already on the ground.
At least the Seahawks managed to recover from that setback. Wilson scrambled every which way — and nearly past the line of scrimmage before retreating — and hit Luke Willson for a 19-yard gain, and punter-holder Jon Ryan ran 5 yards on a fake field goal on fourth-and-1. Six plays later, Wilson hit Lynch for a 9-yard score to give Seattle a 24-10 lead with 6:31 remaining.
The Redskins responded with an 11-play, 80-yard drive, pulling within a touchdown on Cousins’ 6-yard pass to Andre Roberts with 3:35 to go.
But the Seahawks took the ensuing kickoff and marched back down the field. Wilson converted a third-and-4 with another run-for-his-life scramble, evading Ryan Kerrigan and tumbling backward as he found Lynch for a 30-yard gain. Steven Hauschka then iced the game with a 43-yard field goal with 21 seconds to play.
And, most importantly for the Seahawks, they made it through that final drive without a penalty.