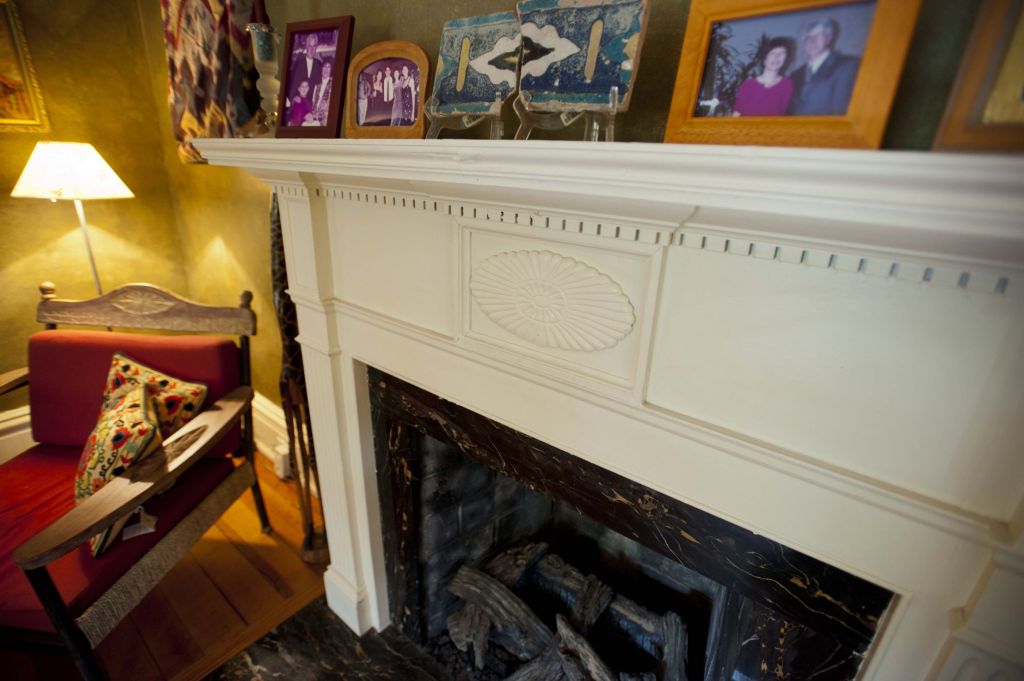 A visit to Will and Mary James’ South Fulton Street home is like a visit overseas. Will is an international environmental attorney, and the couple has lived in Africa and Central Asia. Most of the artwork and furnishings in their home come from those faraway places.

“I was sort of an Ikea-Pier 1 girl until I married him,” she says.

The McCubbins-Rouzer House was built in 1879 and converted to apartments in the 1960s. More recent owners have returned the house to a single-family dwelling, and the Jameses are continuing restoration work.

The pine woodwork in the front vestibule, foyer and living room has recently been stripped of paint and restained to its original look. Additionally, the couple uncovered a second set of pocket doors to the living room, and they have been restored, matching the doors found on the other side of the foyer which lead into the study.

One of Will’s foreign assignments ended in 2004, and the couple, who had adopted son Robin from the Republic of Georgia, needed a home. They were living in Washington, D.C., at the time, and wanted a historic home. Mary’s Google search led her to consider Salisbury. She stopped by on the way to visit family in Charlotte, and was totally enchanted with Fulton Street.

All along the way, Mary had collected art and jewelry from her travels, which is on display throughout the home. Visitors will see Ikat robes from Central Asia in the living room, along with Russian plates that match the patterns in the robes.

In the front hallway, you’ll see a wall hanging from Central Asia known as a Suzani. On the stairway is a collection of paintings in the Soviet Realism style — scenes of workers, collective farms, industry, trains.

In the study is a collection of antique masks and artifacts from the Jameses’ stay in West Africa. There’s also a beautiful piano here made by C.M. Schroder that Mary found in Uzbekistan for $350. It was restored by Kluttz Piano.

The dining room features a massive Victorian mantel mirror that came with the house, as well as two cases of jewelry Mary collected while in Central Asia. Numerous paintings from Soviet Russia and the Republic of Georgia also hang in this room.

Although the art and jewelry gives the home a museum-like feel, Mary says it’s a very comfortable house. They spend most of the time in the living room that has — you guessed it — sofas from Pier 1.

Out back, visitors will take note of a huge osage orange tree, and will have a chance to see the pool area — unusual for a home in the historic district.

Mary says they’d eventually like to update the kitchen and replace the fence along the side of the house.

When it comes to historic preservation, she says, “You just do what you can.”