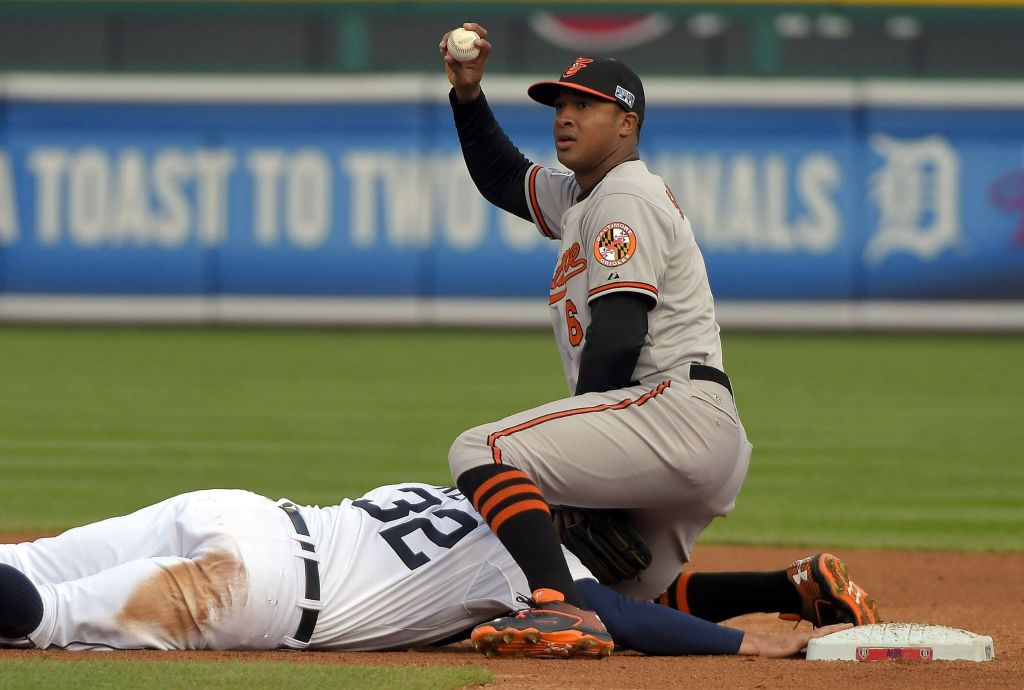 Tribune News Service
Oct. 06–DETROIT — Nelson Cruz has hit plenty of home runs for the Orioles this year, and his opposite-field blast Sunday afternoon was by no means his most impressive.
But it was his undoubtedly most important.
Cruz ensured the Orioles’ trip to the Motor City was a short one when he broke a scoreless tie in the sixth inning with a two-run homer off left-hander David Price, giving the Orioles a 2-1 clinching victory over the Detroit Tigers in Game 3 of the American League Division Series.
The Orioles are now heading to their first AL Championship Series in 17 years. They will face either the Kansas City Royals or the Los Angeles Angels in Game 1 on Friday. Kansas City leads the series, 2-0, going into Sunday’s Game 3.
The Orioles’ three-game sweep of the Tigers marked their first postseason series sweep in more than four decades, when they beat the Oakland A’s in three games in the 1971 ALCS.
And for Orioles manager Buck Showalter, the on-field architect of the club’s resurgence, the victory gave him his first postseason series win. The Orioles won the AL wild-card game in 2012 to advance to the ALDS before losing to the New York Yankees in five games.
The Tigers, a team with outstanding postseason credentials that included one World Series appearance and three ALCS appearances in the past three years, had not lost in the Division Series round in four previous trips.
So it’s understandable why the Orioles entered the series as underdogs, despite a 96-win season and an AL East division title.
But in this series, the Orioles managed to win the three games started by the Tigers’ three Cy Young winners — reigning AL winner Max Scherzer, Justin Verlander and Price.
Orioles right-hander Bud Norris, who was told he was pitching in Game 3 on the team’s flight to Detroit on Friday night, threw 6 1/3 scoreless innings in his postseason debut.
Cruz’s 16th career postseason homer passed Babe Ruth for ninth place on the all-time list. He also tied Yankees outfielder Carlos Beltran for fourth among active players, trailing Derek Jeter (20), Albert Pujols (18) and David Ortiz (16).
Eight of Cruz’s 16 postseason homers have come against the Tigers. As a member of the Texas Rangers, he hit six homers against Detroit in the 2011 ALCS. In eight career postseason games against the Tigers, Cruz is 8-for-20 with 18 RBIs.
Cruz, who has been the most impactful hitter of the postseason, led the major leagues with 40 homers in the regular season. He could have been had by any team in baseball in the offseason, but he didn’t receive the multiyear deal he was seeking and in February signed a one-year, $8 million deal with the Orioles.
With one on in the sixth inning, Cruz sent a 1-1 changeup tailing off the barrel of his bat down the right-field line into the first row of seats, just inside the base of the foul pole above the 330 feet sign on the fence.
Price had retired seven straight Orioles hitters before Adam Jones hit a one-out single up the middle, bringing Cruz to the plate. Cruz’s blast silenced an already subdued announced 43,013 at Comerica Park on a chilly afternoon as the sun set on the Tigers’ season.
Every time Cruz stepped to the plate, he heard an unmistakable chorus of boos and the chant of “ster-oids” from the crowd, a reference to his serving a 50-game suspension last year for his involvement in the BioGenesis scandal.
Pitching after a 10-day layoff from his last regular-season start, Norris allowed just four base runners — two hits and two walks — while striking out six.
Norris didn’t allow a hit after Don Kelly’s leadoff single in the third inning. He retired 11 of his last 12 batters — the only base runner allowed was Kelly, who reached on a third-strike wild pitch — before issuing a one-out walk in the seventh, his final batter of the game.
The day before Game 3, Cruz talked about the importance of getting to Price early to quiet the Comerica Park crowd.
“We have to jump out fast because of the pitcher we’re facing,” he said. “If we let him get into a rhythm, it’s going to be tough to score. We have to attack early and score early.”
The Orioles didn’t have a base runner reach second base against Price before Cruz’s blast.
Norris escaped the bottom of the third inning unscathed, stranding two runners in scoring position after a rare throwing error by shortstop J.J. Hardy placed runners at second and third bases.
Kelly opened the inning with a single, then stole second base. Hunter hit a grounder to Hardy, who threw to Jonathan Schoop to get Kelly off second base. Schoop dropped the ball while he blocked Kelly from the base. Schoop recovered the ball and tagged Kelly, who was called out.
Miguel Cabrera then hit another grounder to shortstop that Hardy threw wide of second and into right field, placing runners at second and third. But Norris induced a flyout from Victor Martinez to end the inning.
Left-hander Andrew Miller retired all five batters he faced as the Tigers were unable to get a ball out of the infield.
Back-to-back doubles by Victor Martinez and J.D. Martinez off closer Zach Britton in the ninth awakened the home crowd and cut the lead to 2-1. But Britton struck out catcher Bryan Holaday, then intentionally walked Nick Castellanos — creating a force play but placing the winning run on base.
The strategy worked to perfection as pinch hitter Hernan Perez hit a sinker from Britton to third base, starting a 5-4-3 game-ending double play that prompted a celebration behind the pitcher’s mound.