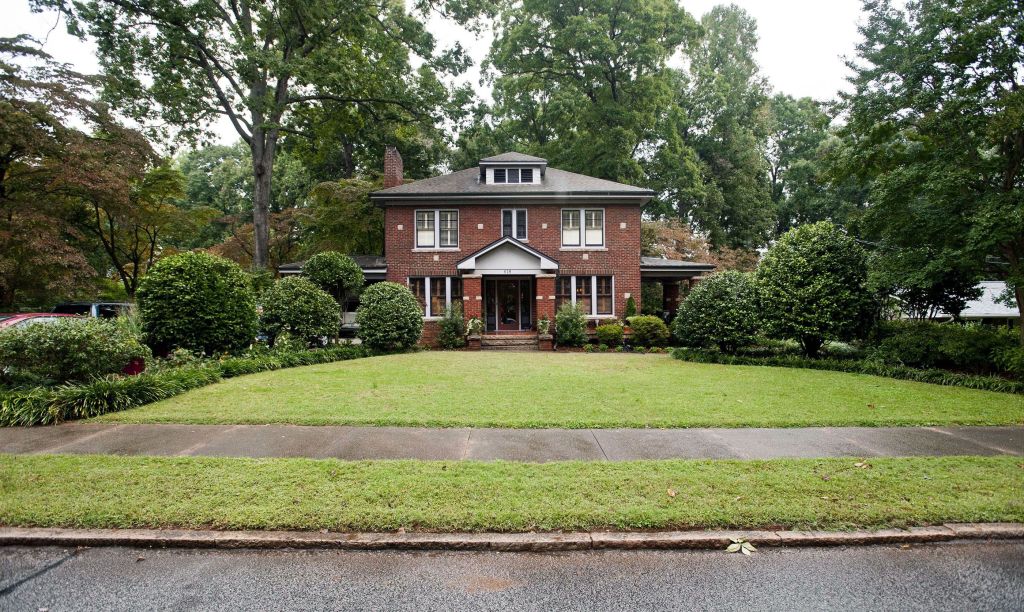 Most folks wouldn’t consider a home built in 1928 to be “new,” but in the context of OctoberTour, the home of Andrew and Theresa Pitner is indeed a youngster.
Their two-story brick foursquare home on Wiley Avenue is the newest house on this year’s tour. It also marks the first time in OctoberTour’s history that homes in Fulton Heights are included on the tour.
As far as Theresa is concerned, she doesn’t want to live in any other neighborhood. When the Pitners moved to Salisbury from Mooresville in 2001, they lived on Mitchell Avenue for 10 years. But this home, with its enormous backyard, was too tempting to pass up. It’s located next door to Centennial Park.
“This was always a house we just loved,” Theresa says. In their Mitchell Avenue home, she says, they did extensive work on the walls, ceilings and floors.
“In this house, we just had to paint,” she says. “We put our furniture in and moved in and spent the night the first night.”
The Pitners have added interior wooden shutters to the front of the house, but the rest of the wood that visitors will see is all original. Gavine Pitner, Andrew’s mother, lives next door, and the couple has added family furniture to this home. In the living room, you’ll see an 1800s family clock on the mantel, as well as a beautiful secretary nearby and paintings done by Gavine’s uncle. Theresa purchased the sofa and two chairs in this room from an antique store that was in the current Zink’s location.
In the dining room, visitors will see more family furniture, as well as dishes that belonged to Gavine’s great aunt.
The kitchen was updated by the previous owner before the Pitners moved in, although Theresa says she never even used the stainless-steel dishwasher.
The Pitners are slowly replacing the home’s original light fixtures that were removed by the previous owner. The sconces she found at the Historic Salisbury Foundation’s salvage warehouse look like they’re part of the original décor, she says. “I think historic preservation is the ultimate in recycling.”
The downstairs hallway is filled with family photos. The home’s original blueprints — yes, they’re actually blue — are on display as well. Drawn by builder I.A. Nussman, they’ve remained with the house over the years, and have been hung in different rooms, Theresa says.
Upstairs, visitors will see Theresa’s collection of some 200 Barbie dolls. She collected dolls made from the 1950s to the 1980s.
“When I was a kid, I loved Barbies,” she says. “When I was in my 20s, it became popular to collect them.”
Since he was born in Idaho, son Watson is a huge Boise State fan, so there’s lots of team paraphernalia in his room. The Salisbury High School senior is also a photographer, and visitors will see many examples of his work.
Although the Pitners have lived in other places, they chose Salisbury because of its emphasis on historic preservation, Theresa says.
“I wanted to live in a neighborhood with sidewalks,” she says. “To me, Fulton Heights is the place to be. We have the tightest neighborhood ever. We all know each other.”
The neighborhood boasts its own Web site, Facebook page and newsletter, as well as neighborhood yard sales, and the annual Halloween celebration and parade coming up at the end of this month.
“You can’t get that anywhere else,” Theresa says. “This is such a good, family-focused neighborhood. For our family, it just fit.”
And she loves the fact that their home is on OctoberTour. At least three people coming have lived in the house before, and she’s enjoyed hearing the stories about the home and the neighborhood.
“It’s so exciting to have your home on tour,” Theresa says. “I can’t wait for people to come and see the history of Fulton Heights.”
Freelance writer Susan Shinn lives in Salisbury.