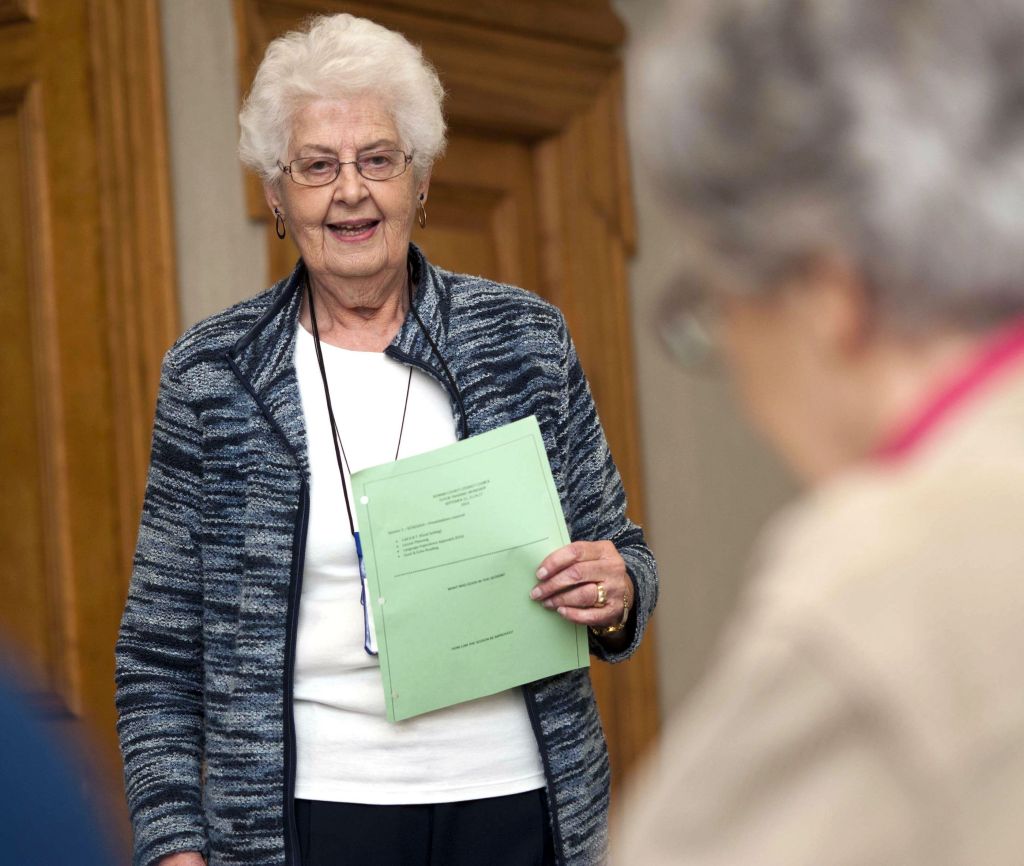 He was 74 years old, and even though he couldn’t read or write and hadn’t been in school since he was 8 years old, this student was smart, quite smart, Martin says.

Working on road construction crews much of his life, he had opened and managed two banking accounts, bought his own house and raised a family. He had honed key survival skills and taught Martin a quick lesson she would see time and time again.

The intelligence of her clients was high — and it often was supported by the tests she gave them.

“We learn more from our students than we ever teach them,” she says.

The man was a student of hers for four years, and long after he completed the program, he returned once a year to visit Martin and administrative assistant Daisy Boyd at the Literacy Council office.

Martin smiles, recalling how proud her first student was when he could read the words in his church hymnal.

Since she was 15 and belonged to a high school service club, Phyllis Allen Martin has always volunteered, but her commitment to the Rowan Literacy Council verged on the absurd.

Tuesday marks her official retirement after 20 years of serving the organization as president, executive director, tutor and tutor trainer.

She made it a full-time job — a full-time job without pay. The existing computer records only go back to 1998, but Boyd says Martin logged 26,000 hours for the council, a United Way-supported agency.

Melody Moxley, recently retired as administrative services manager for the library and longtime vice president of the Literacy Council, talked Martin into becoming president and executive director back in 1995, not long after Martin had started tutoring.

“She has been incredibly dedicated,” Moxley says. “… We all don’t know quite what we’ll do without her.”

Having worked the way Martin has, during a time in life when most everybody else her age is long retired, is unheard of, Moxley says.

Friends of the Literacy Council will be holding a late afternoon reception for Martin today in the Stanback Room of the library. Boyd is staying on in her job, and Cindy DeLorenzo already is on board as interim director.

Martin refuses to say where she found the most satisfaction between teaching students or getting to know all the tutors.

“I’m working with such a great group of volunteers who are dedicated to what they do,” she says. “I stand in awe of them.”

Then she thinks of how brave the students are.

“The most courageous thing our students do is walk through our doors and say, ‘I need help,’ ” she says.

Martin said she sometimes heard people level a criticism at the Literacy Council that tutors were intruding into the lives of their students. All she could say to that complaint was, “You bet we do.”

“I always feel if we can keep them six months, we’ve got them,” Martin says, “but their lives get in the way sometimes.’

The Literacy Council’s clients usually have jobs and children. They might work 12 hours a day. “Who has time to read?” Martin says, “and yet they make time.”

In 2013, the Rowan County Literacy Council served 75 students with 52 tutors. Of those, 70 percent were immigrants representing several different nationalities.

The tutors help their students with reading, writing, life skills and conversational English, especially for the immigrants. The program guarantees anonymity to its students because, as Martin says, it can be hazardous to American jobs if it’s revealed someone who has a job can’t read.

Martin would rather not reveal her age, but suffice it to say, she’s amazing.

“It’s time to get some new blood, new ideas,” she says.

Boyd says Martin is strong, serious, intelligent, curious, computer literate, an avid reader and, of course, has a good work ethic. Her mother apparently instilled the work-ethic part in Martin, because Phyllis has always said if her mother were alive, she would still be working.

Martin grew up in northern New Jersey, and during World War II, she commuted to a banking job in New York City every day. Because so many of the men were serving in the war, the bank promoted her quickly, she says.

But Martin left the bank for a job at the Metropolitan Museum, because it represented more pay, a month’s vacation and no weekend work. She was secretary to the secretary of the corporation.

In time, she landed a new job at the Columbia University Medical Center and started taking night classes at Columbia as an English major.

Divorced now, she married a doctor in 1955. The couple had two children, Mary and Jim, and the family moved south in 1966, first living in Mooresville, then relocating to Salisbury in 1977.

As soon as her first child was in school, Phyllis, who had never finished at Columbia, enrolled at the University of North Carolina at Charlotte, again as an English major.

But during one of her first days in class, when a student asked whether spelling on papers was important and the professor said it was not, Martin changed her major to history.

In 1973, Martin graduated from UNCC. Over the years, she also was heavily involved as a volunteer for the American Red Cross and Girl Scouts.

She worked in her husband’s medical office before going to travel school and becoming a travel agent — a job she hated.

A temporary job agency placed her at the Belk Distribution Center in northern Charlotte, and it led to a permanent secretarial job, followed by promotions to “trouble-shooter” and then being in charge of the invoice order department.

She retired from Belk in 1994, the same year she was trained as a tutor for the Rowan County Literacy Council. She remembers stopping by a Literacy Council table at the mall and being intrigued.

“I didn’t want to sit at home, but I’m not athletic,” she says. “I thought I could probably do that for a couple of years.”

Those couple of years became a devotion to literacy.

“I decided it was something I could do because I could read,” Martin says. “That doesn’t always mean you can do it.”

After the previous director resigned, Martin took over the position (while also being president) in November 1995. She and Boyd, who has been working for the council since March 1995, have been manning the office together all those years.

Over Martin’s time with the Literacy Council — remember, she says, “we can’t just pound it in, it takes a long time” — she taught 17 students.

That was in addition to heading the agency and teaching tutors. Again, she was not paid.

Martin says the rewards came in the form of students, tutors, Boyd, Moxley and the support from the community and United Way.

“This is the greatest volunteer program there is,” she says.