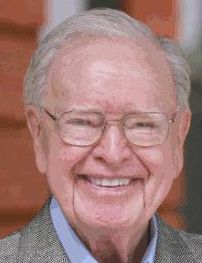 The Holiday Caravan Parade has chosen Food Lion co-founder Ralph Ketner to be its grand marshal for the 2014 event. Ketner, who recently turned 94, co-founded Food Town, predecessor to the Food Lion supermarket chain.
“Our board decided earlier this year it was time to honor this man who has done so much for this community,” said Wesley Perry, chairman of the Holiday Caravan Board of Directors. “Mr. Ketner personifies everything that this parade has been about for the past 55 years.”
Ketner and his brother Brown, along with Wilson Smith, established the grocery chain in 1957 with its first store in Salisbury. Food Lion is still based in Salisbury and is a company of Delhaize America, the U.S. division of Brussels-based Delhaize Group (NYSE: DEG). Today, Food Lion operates more than 1,100 supermarkets in 10 Southeastern and Mid-Atlantic states, and employs more than 62,000 associates.
Part of the celebration honoring Ketner is a new initiative with the parade, a community food drive along the parade route, to support Food Lion Feeds initiative to support hunger relief in the markets it serves. Applications for professional floats, other entries and reserved seating are now being accepted at www.holidaycaravanparade.com.
The 2014 Holiday Caravan Parade will be held Wednesday, Nov. 26, with a start time in Spencer of 2 p.m. and Salisbury at 3 p.m. The parade is an all-volunteer production coordinated through a non-profit organization, led by a volunteer Board of Directors.