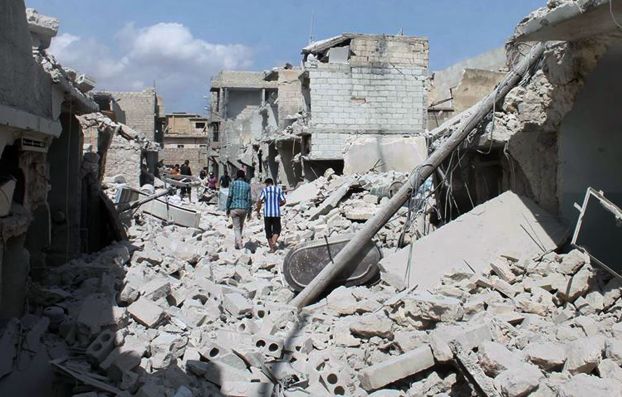 WASHINGTON (AP) — President Barack Obama on Sunday gave voice to the conundrum at the heart of his Syria policy, acknowledging that the U.S.-led military campaign against the Islamic State group and al-Qaida’s affiliate in Syria is helping Syrian dictator Bashar Assad, a man the United Nations has accused of war crimes.
“I recognize the contradiction in a contradictory land and a contradictory circumstance,” Obama said in an interview aired Sunday on CBS’ “60 Minutes.” “We are not going to stabilize Syria under the rule of Assad,” whose government has committed “terrible atrocities,” Obama said.
“On the other hand, in terms of immediate threats to the United States, ISIL, Khorasan Group — those folks could kill Americans.”
ISIL is an alternative acronym for the Islamic State group, which has broken with al-Qaida as it has taken control of large sections of Iraq and Syria. The Khorasan Group is a cell of militants that the U.S. says is plotting attacks against the West in cooperation with the Nusra front, Syria’s al-Qaida affiliate. Both groups have been targeted by U.S. airstrikes in recent days; together they constitute the most significant military opposition to Assad, whose government the U.S. would like to see gone.
Obama said his first priority is degrading the extremists who are threatening Iraq and the West. To defeat them, he acknowledged, would require a competent local ground force, something no analyst predicts will surface any time soon in Syria, despite U.S. plans to arm and train “moderate” rebels. The U.S. has said it would not cooperate with the Assad government.
“Right now, we’ve got a campaign plan that has a strong chance for success in Iraq,” the president said. “Syria is a more challenging situation.”
Earlier Sunday, House Speaker John Boehner questioned Obama’s strategy to destroy the Islamic State group. Boehner said on ABC’s “This Week” that the U.S. may have “no choice” but to send in American troops if the mix of U.S.-led airstrikes and a ground campaign reliant on Iraqi forces, Kurdish fighters and moderate Syrian rebels fails to achieve that goal.
“We have no choice,” Boehner said. “These are barbarians. They intend to kill us. And if we don’t destroy them first, we’re going to pay the price.”
Obama, though, made clear he has no interest in a major U.S. ground presence beyond the 1,600 American advisers and special operations troops he already has ordered to Iraq.
“We are assisting Iraq in a very real battle that’s taking place on their soil, with their troops,” the president said. “This is not America against ISIL. This is America leading the international community to assist a country with whom we have a security partnership.”
Only the U.S. could lead such a campaign, Obama said.
“When there’s a typhoon in the Philippines, take a look at who’s helping the Philippines deal with that situation,” he said. “When there’s an earthquake in Haiti, take a look at who’s leading the charge and making sure Haiti can rebuild. That’s how we roll. And that’s what makes this America.”
“60 Minutes” interviewer Steve Kroft asked Obama how the threat emanating from Syria and Iraq squares with the president’s longstanding position that al-Qaida’s leadership has been “decimated.”
“You had an international network in al-Qaida between Afghanistan and Pakistan, headed by bin Laden. And that structure we have rendered ineffective,” Obama said. “But what I also said … is that you have regional groups with regional ambitions and territorial ambitions. And what also has not changed is the kind of violent, ideologically driven extremism that has taken root in too much of the Muslim world.”
While an “overwhelming majority of Muslims are peaceful,” Obama said, “in the Muslim world right now, there is a cancer that has grown for too long that suggests that it is acceptable to kill innocent people who worship a different God. And that kind of extremism, unfortunately, means that we’re going to see for some time the possibility that in a whole bunch of different countries, radical groups may spring up, particularly in countries that are still relatively fragile, where you had sectarian tensions, where you don’t have a strong state security apparatus.”
But “rather than play whack-a-mole and send U.S. troops wherever this occurs, we have to build strong partnerships,” Obama said. “We have to get the international community to recognize this is a problem. We’ve got to get Arab and Muslim leaders to say very clearly: ‘These folks do not represent us. They do not represent Islam.”’
Asked how Islamic State fighters had come to control so much territory in Syria and Iraq, Obama acknowledged that U.S. intelligence agencies underestimated the threat and overestimated the ability and will of Iraq’s army to fight.
Obama said he agreed with his director of national intelligence, James Clapper, who acknowledged that the U.S. “underestimated what had been taking place in Syria.” Obama also said it was “absolutely true” that the U.S. overestimated the ability and will of the Iraqi army.

The week in review:

1. Salisbury City Council will consider contracting with a search firm to help with its hiring process for a new... read more