Gruden: ‘Reality check has come in’ 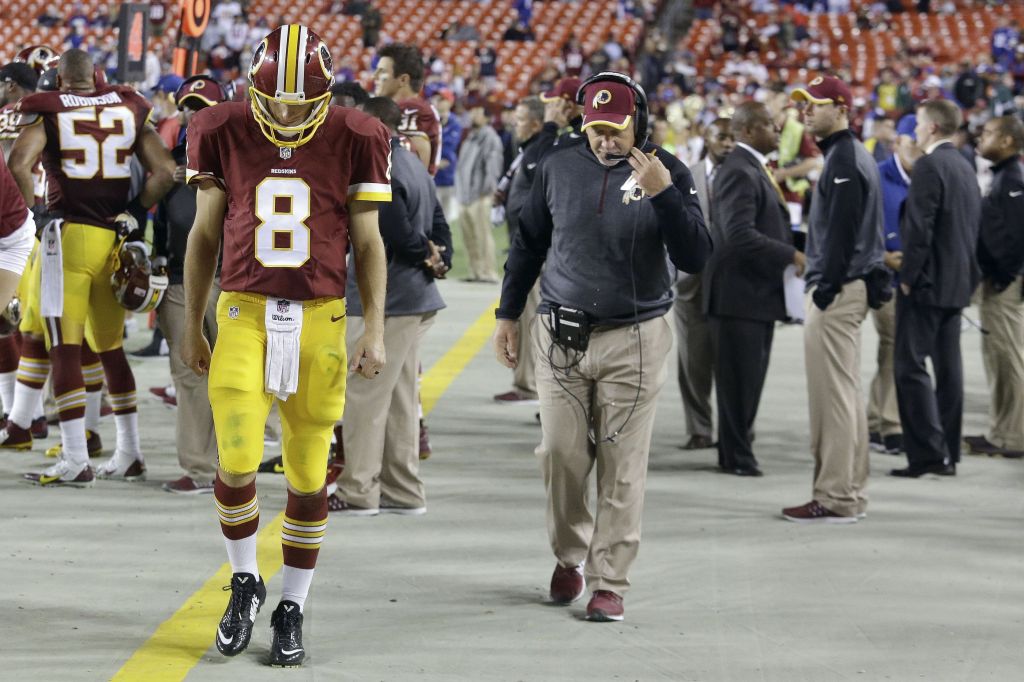 WASHINGTON (AP) — Hard to believe that the Washington Redskins, who haven’t beaten anyone other than the Jacksonville Jaguars in the last 326 days, could be overconfident about anything.
But that’s the malady that first-year coach Jay Gruden sensed during a 45-14 prime-time embarrassment against the New York Giants.
“Sometimes you need a beating like this to let people know that you have a lot of work to do,” Gruden said Friday. “Reality check has come in, in full force.”
The Redskins were banged up on both sides of the ball and were playing on a short week — which would seem to quash any notion of complacency — yet Gruden said his players were perhaps feeling too good about themselves following a 31-point win over the woeful Jaguars in Week 2 and a close-call loss to the unbeaten Philadelphia Eagles on Sunday.
“I’m hoping this is a wake-up call, a slap in the face, that, ‘Hey you’re not as good as you think you are,”’ Gruden said. “You have a lot more work to do than you think you do. … We can’t just put our uniform on and jog onto the field, act like we’re going to beat people’s butt without working. We have a work a little bit harder.”
The Redskins were simply manhandled by the Giants on Thursday night. Kirk Cousins committed five turnovers and fell to 1-5 as a starter, giving the kind of performance that will quickly end any conversation about a quarterback controversy when Robert Griffin III is healthy again.
Gruden said his defense posed no “physical threat” to New York’s offense, allowing Eli Manning to get rid of the ball quickly because the receivers were running with barely a hindrance.
Gruden said pass-rushers Jason Hatcher (hamstring) and Brian Orakpo (finger) were hindered by injuries, but they probably wouldn’t have made much of an impact if healthy because Manning was releasing the ball so quickly.
The roughest night of all, however, belonged to Cousins. The Giants’ defensive backs said he was telegraphing some of his throws, and Gruden agreed.
“He’s a young guy playing a position, and young guys playing that position at this level tend to make mistakes from time to time,” Gruden said. “We’ve just got to make sure he sees his throws a little bit better, and his eyes are in the right spot.”
Gruden added that Cousins wasn’t getting much help.
The Redskins also committed 11 penalties — double-digits for the third straight week. Gruden said his team isn’t talented enough to overcome such mistakes.
“We’re going to have a lot of close games,” he said. “We don’t have the personnel right now to line up and beat anybody handily.”
The Redskins’ next game is a “Monday Night Football” appearance Oct. 6 against Super Bowl champion Seattle.
That’s followed by a long trip to face the Arizona Cardinals. The extra time will help heal the injuries; Gruden and his staff will work on the psychological part.
“We’ve got to get our bodies healthy, we’ve got to get our minds healthy, and we’ve got to make sure our commitment’s in the right spot,” Gruden said. “We can still do a lot of damage and still achieve all our goals.”
———
AP NFL websites: www.pro32.ap.org and www.twitter.com/AP—NFL
———
Follow Joseph White on Twitter: http://twitter.com/JGWhiteAP