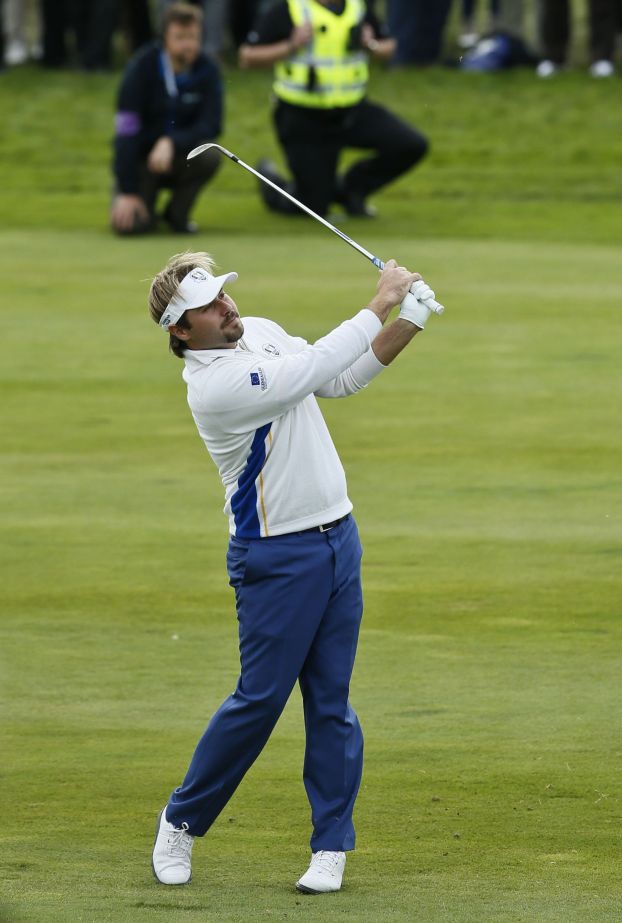 GLENEAGLES, Scotland (AP) — Justin Rose swept that magical putter into the air before his ball even reached the hole, and he punched his right fist when it dropped for a birdie. Just like at Medinah, the final match in the Ryder Cup on Saturday gave Europe another big boost of momentum going into the last round.
Only this time, Europe didn’t really need it.
Rose capped off a remarkable Saturday for himself and his team. That 6-foot putt on the 18th hole at Gleneagles was enough to give Rose and Martin Kaymer a half-point, giving Europe a 10-6 advantage and leaving it on the cusp of another Ryder Cup victory.
That was the same score two years ago, except that Europe was in dire need of a comeback.
Now it is worried about complacency.
“This job is far from finished,” Europe captain Paul McGinley said. “We’re in great position, but we’ve got a lot of work to do tomorrow.”
Rose teamed with Henrik Stenson to make a record 12 birdies in 16 holes in fourballs. Equally important was getting something — even a half — in foursomes against America’s refreshing rookie tandem of Jordan Spieth and Patrick Reed.
“Any glimmer of momentum that they had — say they win that match — they take something with them into the locker room,” Graeme McDowell said. “And that’s what happened to us at Medinah. That’s why that putt for Justin was so huge, because it gave them nothing to take away this evening.”
U.S. captain Tom Watson walked away only with a lot of questions he couldn’t answer.
He was criticized for playing Phil Mickelson and Keegan Bradley a second time on Friday, and it was even more peculiar when he didn’t they them at all on Saturday.
Instead, Watson sent out Rickie Fowler and Jimmy Walker for a fourth straight match, even though their previous games all went to the 18th hole and ended in a draw. The fatigue was evident.
“It may have been a mistake that I put Jimmy and Rickie out for four matches,” Watson said. “I thought they could handle it.”
Watson wasn’t about to give up on this one.
His best hope is to get American red on the scoreboard early, and he loaded the front with his best players. The first two are rookies — the 21-year-old Spieth and 24-year-old Reed, the only unbeaten Americans at Gleneagles. Spieth faces McDowell, who has won both of his matches this week. Reed plays Stenson, who is 3-0 and sat out Saturday afternoon with a tender back.
“You might think that it’s a given that the Europeans are going to win,” Watson said. “But I sure as hell don’t.”
It wasn’t quite as convincing as Ben Crenshaw wagging his finger and saying, “I have a good feeling about this” like he did at Brookline in 1999 when the Americans rallied from a 10-6 deficit before a boisterous crowd outside Boston.
Europe needs only four wins out of 12 singles matches to retain the cup, and an additional halve to win outright.
The European comeback at Medinah began Saturday evening when Ian Poulter birdied his last five holes for an unlikely win that closed the gap to 10-6, and Europe rode that spark to the greatest rally by a visiting team in Ryder Cup history.
Poulter finally delivered, even if it was only a half-point. Poulter and McIlroy were headed for defeat in fourballs against Walker and Fowler, on the verge of going 2 down on the 15th hole when Poulter chipped in across the green for birdie, and then made a 20-foot birdie on the next hole to square the match.
Poulter came into this Ryder Cup with the highest winning percentage — 12 wins in 15 matches — of anyone who has played multiple times. He has played only twice this week, and Europe still has a 10-6 lead.
“This is more than a one-man team,” McGinley said. “Ian Poulter has been a colossus in the Ryder Cup. He played a massive role today.”
Europe, as always, was best at the end. For the second straight day, the Americans rallied in the morning by winning 2 1/2 points in fourballs. For the second straight day, Europe answered in the afternoon by going unbeaten (3W-0L-1D) in foursomes.
“We’re in a tough position,” Walker said. “But I feel like we can dig ourselves out of the hole.”