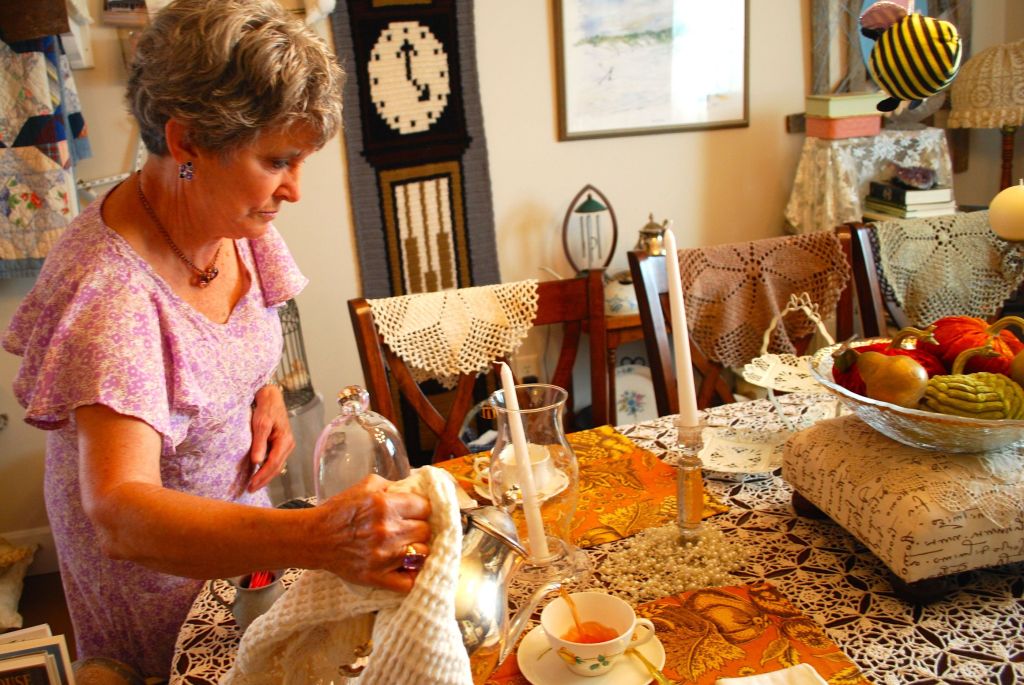 When it comes to her family history, Gail Gurley is one serious diva. After purchasing her grandmother’s Granite Quarry home in 2011, Gail and her husband Ed tore the house down to the studs while preserving as much of the structure’s history as possible.
“My grandfather built the house in 1907,” said Gail. “It has a soul.”
Among the updates to the home was the creation of a “man cave” for Ed, a die-hard Redskins fan. But the truly prime real estate — an old, dirty workshop in the back yard — was all for Gail. Today it is a bonafide “Diva Den,” and the place where Gail finds inspiration and pays tribute to her family’s heritage.
“As soon as my feet hit the front porch, I’m home,” said Gail. “It’s a feeling, an attitude, like I’m just being wrapped in love.”
Bright and welcoming, Gail’s Diva Den décor incorporates family heirlooms like her grandmother’s frying pan from the early 1900s, along with antique store finds and countless pieces that Gail cross-stitched or crocheted herself.
“I just call my style vintage,” she said. “Anything old, I gravitate to.”
A published author of five books, Gail finds illumination in her personal space. It’s also great for entertaining.
“I love to have my friends in here. We have tea, we have lunch.”
The name “Diva Den” came about when Gail was giving a tour of her renovated home. “Somebody said, ‘You’re such a diva.’ And that stuck with me,” said Gail.
By far the strongest presence of the past in Gail’s home and Diva Den is that of her grandmother, Minnie Lingle, born in 1888. Minnie birthed and raised nine children in the home.
“Grandmother was always in the kitchen, and always had a smile and a hug,” said Gail. Born and raised in Morlan Park, Gail has fond memories of walking on the rail tracks with her sister to grandmother’s house.
“It was just a happy time,” said Gail. “I didn’t realize at the time how happy it was.”
In 1977 when Minnie Lingle died, Gail’s uncle inherited and lived in the home until 2004, when a young couple bought the house. They went through foreclosure in 2011. They were the only non-family owners in the 107-year history of the home.
“I see the young couple as stewards of the house,” said Gail.
Gail moved in 1965 to High Point, where she met and married her husband, Ed. After retiring from 21 years as a probation parole officer for the state, Gail just happened to say, “Let’s go drive by grandmother’s,” during a visit to Salisbury. Driving past the home, the overgrown grass and empty windows told a story of neglect.
“The house was sad. It needed updating. It needed love,” Gail said.
Today, the fully renovated home welcomes visitors with its sprawling porch and the stories that each of its rooms tell.
But to get to the heart of the house, visitors must step outside to the Diva Den, the space that Gail calls “a tribute to the whole family.”
“I’m the matriarch, the oldest female in the family now. So I guess I am the family historian,” said Gail, now 72 years old. Her novels, too, bring history to life, set in periods such as the Great Depression. “I’m gung-ho on history.”
Unlike a museum or history book, the house on Main Street in Granite Quarry is constantly changing.
“I always have a project,” said Gail. “The house is a living entity. It has to be fed and nurtured.”
And Gail gets immense satisfaction from this task.
“I’m just so grateful to be home.”