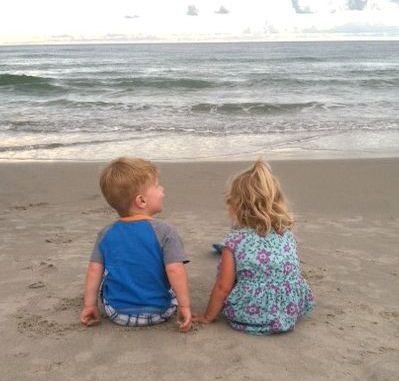 Our sweetie Marie turned 2 this month and is just beginning to verbalize her thoughts. As we took a little trip I was blessed with the space between her car seat and her brother’s. Jesse is not interested in chitchat, but Marie however felt the need to point out all things as we traveled.
“Bike! Bike! Bike! Bike. Bike. Bike… Bike?”
“I see it honey. It’s a bike!”
“Puppy! Puppy! Puppy! Puppy. Puppy. Puppy. Puppy?”
“Yes! It’s a puppy.”
“Ear! Ear! Ear! Ear. Ear. Ear. Ear?”
“That’s right Marie. Grammy’s ear.”
“BIKE! BIKE! BIKE! BIKE! BIKE! BIKE! BIKE!”
Dang guy on a mo-ped. For the love of all things rolling, will you please just turn.
“Yes. It’s a bike, sweetheart.”
After arriving and unpacking, we piled buckets and snacks and shovels and chairs into a wagon with the kids. Making our way to the sandy shore, Jesse set about unloading. He is also 2, but as a man he already knows that with great fun comes great responsibility. The surf was too rough for swimming so we dug an ample hole in which to splash. Unfortunately the tide did not co-operate so the new digs sat dry. Jesse took his little bucket to the edge of the ocean and began hauling water. Happily I watched from a folding chair way too low for my ummm… agility, but a step up from the seat occupied on the earlier voyage that same morning.
Marie: “Snack! Snack! Snack! Snack! Snack! Snack! Snack!”
Jesse: “Nak.”
Their mom: “Rinse the sand off your hands first. Good job! Here’s grapes and cheese!”
Marie: “Bird! Bird! Bird! Bird! BIRD! BIRD! BIRD!.. WAAAAAAA AAAAAA AAAAA AAAAAAAAH!”
In a single bound, mommy snatched sweetie Marie from the clutches of evil, Poppy flung the Strawberry Shortcake beach towel heavenward, and I proclaimed “Oh nooo…” as I fell into the ample hole.
“Boo-boo!” announced Marie between sobs. She held her little finger up for all to kiss.
Poppy: “I’d like to have a word with the idiots who feed seagulls on the beach. That’s why they’re so aggressive. Stupid bird could’ve scarred my grandbaby for life. I’d hate to bring a pellet gun with me down here, but I will if I have too.”
As he waved the pink beach towel and glared at the hotdog-bun-waving idiots across the way, visions of hippies circling my husband chanting “Save the baby seagulls” did not seem far-fetched.
Mommy: “Don’t worry baby. Want some more cheese? Here you go. I’ll hold you. Poppy will shoo away the birds. It’s okay.”
Marie: “Puppy. Puppy. Puppy!”
Mommy: “Yes! Poppy will watch out for you.”
Marie: “Puppy. Puppy. Puppy!”
The stranger who assumed that all mankind understands and loves dogs walked his friendly canine right up to Marie, who still held her finger up for proper sympathy. The dog seemed to sense her sadness and began licking her knees and hands and before we could intervene, her little face as well. Suddenly the big furry face in hers was no longer comforting.
Marie: “Go.”
With that one word, Jesse began loading the wagon. That little man will make someone a very good husband someday.
Since I had just navigated myself out of the hole and into the very low chair, I chose to allow him to serve. It’s good for children to understand it’s not all about them. As I sat recovering from the trauma of the rescue, I noticed the tide had filled the hole. The beach was suddenly clean and free of strangers and shovels and buckets and dogs and seagulls from hell. A backward glance revealed the two children had loaded all the toys and sat waiting in the wagon for a lift home.
The September sun warmed my face, somehow penetrating the freshly applied 110 SPF. A light ocean spray perfectly cooled my contented soul. Poppy offered his hand as an invitation to leave this happy place and join the procession homeward. A beautiful word came from the direction of the wagon as our precious grandbabies called me in unison…
“Daaaammm- eeee…”
Guess I should’ve named myself something easier like maybe … bike.
Oh what a wonderful life I live! And when I’m especially blessed, it’s that happy space between two car seats.
Lynna Clark lives and writes in Salisbury.