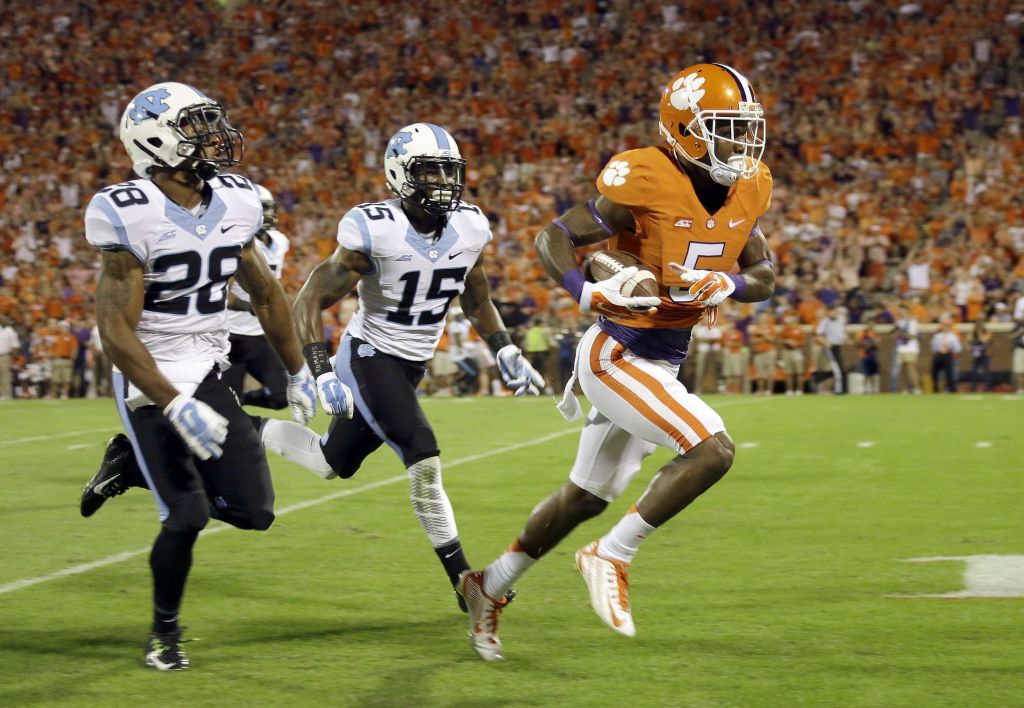 CLEMSON, S.C. (AP) — Freshman Deshaun Watson threw for 435 yards and set a school record with six touchdown passes in his first ever start to lead Clemson to a 50-35 win over North Carolina on Saturday night.
The Tigers (2-2, 1-1 Atlantic Coast Conference) decided Watson’s time had come, and the 19-year-old didn’t shrink in the spotlight. Watson completed 27 of his 36 passes. He also ran 11 times for 28 yards.
Watson’s six TDs tied the ACC record and only Tajh Boyd has thrown for more yards in a game for Clemson.
North Carolina (2-2, 0-1) gave up 528 yards, and has allowed its opponent to gain more than 500 yards in the past three games.
Mike Williams had six catches for 122 yards and two touchdowns for Clemson, which has scored 49 or more points in five of its last 10 ACC games.
On Watson’s second play he threw a 74-yard touchdown pass to a wide open Germone Hopper. Watson also had a 50-yard TD pass to Hopper in the second quarter, waiting in the pocket until the last moment to drop the pass right into the receiver’s hands.
In the second half, Watson had two 33-yard touchdown passes and a 24-yard scoring throw before tight end Jordan Leggett jumped high in the end zone to pull in the freshman’s record-breaking TD pass.
Artavis Scott had eight catches for 66 yards and a touchdown and Hopper caught three passes for 139 yards and 2 TDs.
North Carolina remains in a tailspin, a week after allowing the most yards, points and first downs in school history. Saturday, the Tar Heels had 15 penalties, one off the school record, for 130 yards, which was 20 yards away from their worst game.
Marquise Williams was 24-of-38 for 345 yards for North Carolina and threw to 13 different receivers. Elijah Hood ran 13 times for 71 yards.
Miami 22, Duke 10
MIAMI GARDENS, Fla. (AP) — Duke Johnson rushed for 155 yards and a touchdown, Brad Kaaya threw for two more scores including a fourth-down connection during a rainstorm, and Miami defeated Duke 22-10 on Saturday night.
Kaaya completed 20 of 34 passes for 223 yards, and Miami (3-2, 1-1 Atlantic Coast Conference) won for the 11th time in its last 12 home games.
Shaquille Powell ran for 58 yards and a touchdown for Duke (4-1, 0-1).
Herb Waters and Joe Yearby caught touchdown passes for Miami.
The Hurricanes held the Blue Devils to 264 yards, held them 17 times in 19 chances on third- and fourth-downs and became the second program to keep Duke to 10 points or less in its last 36 games.
Quarterback Anthony Boone completed 22 of 51 passes for 179 yards, with two interceptions.
Louisville 20, Wake Forest 10
LOUISVILLE, Ky. (AP) — Brandon Radcliff ran for two touchdowns and 129 yards and the Louisville defense held firm in Saturday’s ugly 20-10 win over Wake Forest.
Radcliff’s first career 100-yard effort on 17 carries was much needed as Louisville (4-1, 2-1 ACC) overcame three lost fumbles and 11 penalties. The Cardinals defense kept Wake Forest (2-3, 0-1) to minus-22 yards rushing and had three takeaways, setting up both touchdowns. Wake Forest scored first on Mike Weaver’s 43-yard field goal late in the first quarter and retook the lead at 10-7 with 8:32 remaining in the third quarter following nose tackle Tylor Harris’s fumble recovery in the Louisville end zone for a touchdown.
Radcliff’s 16-yard score with less than 12 minutes left followed his 29-yard second-quarter touchdown.