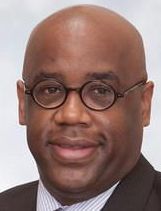 You can’t miss what you never had, right? That doesn’t apply to the residents of the West End, who have vocally expressed how they’ve missed the familial relationship they once had with Livingstone College. I’m one of those many who were happy this past Saturday to kiss and make up with that long-lost relative and work on strengthening a once seemingly impenetrable relationship.
I knew my feelings were shared by many others as I walked the parade route and saw the pride and happiness of the many who littered the sidewalks and intersections along the route. I enjoyed watching little kids and big “kids” bopping to the sounds of the Blue Bear Band anxiously waiting for them to “cut up” and dance at some point during the March.
As I stood tucked under the protection of the menancing Blue Bear statue and looked down the lawn towards the Varick Auditorium while listening to local leaders like school board Vice Chairman Kay Wright Norman, City Councilwoman Karen Alexander, West End Community Organization President Fannie Butler and West End Pride leader Almeida Holt address the crowd, a flood of great memories came over me.

In my mind, I reverted back to a 12-year-old kid that played on that same lawn, sat on the wall listening to the band’s drumline practice, eating pizza at the Student Union, sneaking into a football game or two, and as an older teen, pretending to be a freshman student to score a phone number. The standard refrain growing up when asked what was on the agenda for the day was, “Hanging out on the Yard.” Ahhh, memories.
As time marches on, memories fade and we tend to focus more on a nostalgic and overly romanticized past rather than acknowledging the harsh realities that exist today. But this was not the case as I sat in a recent meeting with Livingstone College President Dr. Jimmy Jenkins, COO Dr. Herman Felton and a collection of other committed community leaders.
While each person did have the opportunity to share their connection to the past relationship, the reason we were there was made clear at the outset by Dr. Jenkins. On my barely legible hand scribbled notes from the meeting, there were three statements he made that resonated with me. He said, “I have seen the enemy and he looks like me. We need to claim our own. We can only do this if we work together to solve our problems.”

I found common ground with his words because when I look at statistical categories that impact longevity and progression, it is reflective of shared physical characteristics. I don’t believe in allowing the keys to any community to be held solely by those who are not physically or emotionally invested. A financial investment via a drive–thru approach does not equate to a desire to see the people there thrive.
As evidenced by the number of individuals and organizations recognized during halftime festivities, there are a quite a few folk doing some great things to help in transforming the community. It takes the spirit of collaboration from within as well as support from those outside with sincere intentions for this to be a success. Just because our methodologies may differ, our objective and goal is one in the same and we recognized this at the president’s roundtable meeting.

The challenge will be to produce that same collective spirit outside of the comfort of the high-back leather chairs. Back in June as I prepared for our first West End Community meeting, an attendee confronted me in an angry tone, questioning why I was in the West End working when I don’t live there any longer. At first I was surprised at his resentful approach, then amused at the silliness of the question, and finally saddened that he failed to embrace the positive intent. Since then, I’ve yet to see this individual at any other event or out in support of other positive initiatives of change, so he has been rendered persona non grata in my eyes. More recently, I’ve been referred to as a militant, angry, selling out, and our Chamber Group accused of undermining the civil rights efforts of another group. Didn’t someone ask years ago can’t we all just get along?
As the successful 1st Annual West End Classic proved on Saturday, if no one cares who gets the credit and the focus in not on who broke it, but instead how we fix it, a community transformation via a cultural renaissance is possible. Yes, I’m a bit nostalgic because Saturday as I stood on the college’s front lawn; it felt good to go home again.
Ken Hardin lives in Salisbury.