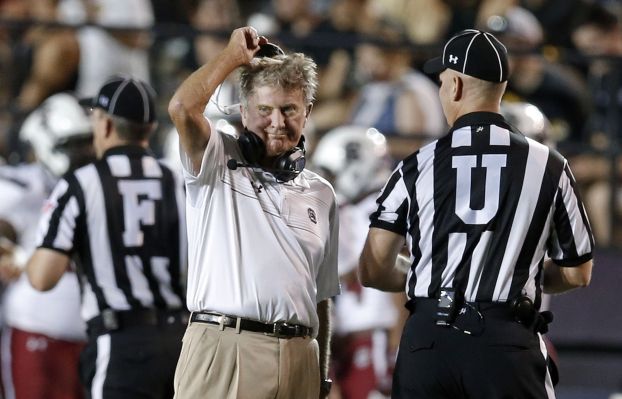 COLUMBIA, S.C. (AP) — Steve Spurrier wasn’t quite as angry Tuesday as he had been about South Carolina’s performance in a win over Vanderbilt.
He is, though, still very frustrated.
Spurrier ranted about his team’s “embarrassing” performance following the 48-34 win over Vanderbilt, appointing himself kickoff coverage coach when the Commodores returned two kickoffs for touchdowns.
The coach called it one of the worst wins of his career.
A few days later, Spurrier’s fury had eased up a bit.
The coach called special teams leader Joe Robinson “an excellent coach,” and sounded more eager to prepare the Gamecocks (3-1, 1-1 Southeastern Conference) for defending SEC Eastern Division winner Missouri (3-1, 0-0) on Saturday night than to rip into his players any further.
“We still believe we have a chance to have a good team this year. We’re 3-1 and have won some close ones,” Spurrier said. “We’ve played some pretty good teams. We didn’t think Vandy was going to be that good, but they played their hearts out. Probably out-played us. Probably out-hustled us in a lot of areas.”
Spurrier acknowledged there were some bright spots in South Carolina’s third straight win.
Quarterback Dylan Thompson and the offense play strongly, Spurrier said, in leading the Gamecocks out of a 14-0 hole and into the lead by halftime.
“Week one didn’t go as we wanted,” Thompson said, referring to the 52-28 home loss to No. 6 Texas A&M. “But we’ve got three wins since then. That’s what we want to do, we want to win games.”
Perhaps in a more Spurrier-pleasing way.
The Gamecocks entered the season as the clear pick to win the East, a notion that lasted until the Aggies came in and gained 680 yards — the most ever allowed by South Carolina.
The team found its footing in a win over No. 23 East Carolina and regained control of the division by defeating No. 12 Georgia 38-35. No one, including Spurrier, thought the Gamecocks would have much trouble at Vanderbilt until the opening kickoff was brought back for a score.
“We didn’t think Vandy was that good of an offensive team, but they made a bunch of yards on us,” he said. “So it was a little frustrating.”
South Carolina and Connor Shaw have frustrated Missouri since joining the SEC two years ago. The Tigers were picked apart in a 31-10 loss two years ago, Shaw completing 20 of 21 passes and two TDs. A year later, Shaw came off the bench at Missouri despite being ill to rally the Gamecocks from 17-points down to a 27-24, double-overtime victory.
“We’re aware of that. I know that we’re going to come out and we’re going to give them our best game,” Missouri quarterback Maty Mauk said. “We can’t take them lightly. Obviously, they’re a very good football team that can do a lot of things.”
Unless you spend too much time listening to Spurrier, who’ll turn 70 in April.
Safety Sharrod Golightly, a senior, has heard such displeasure before from his head coach and knows what parts of the rant to discard and what to pay attention to.
“With coach Spurrier, we look past the anger and the tone and just try and look into the message,” he said.
Spurrier hopes his players understand they’ve got to improve to reach the goals they freely discussed during the preseason of winning their division and maybe the SEC title.
A win over Missouri would make South Carolina 3-0 against East teams and give the Gamecocks a strong start toward reaching Atlanta for the championship game.
“We do believe our players can play better on defense and on special teams and even offensively,” Spurrier said. “So we believe it and if we can get it out of them, we’ll have a chance for a big year. If we can’t get it out of them, we’re going to be very, very average.”