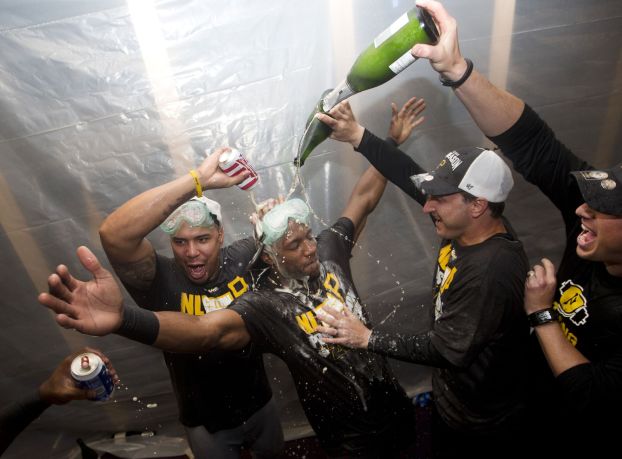 ATLANTA (AP) — Gerrit Cole was so focused on recording 17 consecutive outs, he didn’t glance at the out-of-town scoreboard.
Cole insisted he didn’t know his win over the Braves had clinched a playoff spot for Pittsburgh until he walked into the clubhouse and saw the lockers covered in plastic.
The surging Pirates earned their second-straight trip to the playoffs with a 3-2 win over the free-falling Atlanta Braves on Tuesday night.
Cole gave up two runs in the first two innings and then didn’t allow another baserunner.
The Pirates’ win combined with Milwaukee’s loss to Cincinnati assured Pittsburgh of no worse than an NL wild card.
“I didn’t have any idea until I came in here,” Cole said.
The Pirates wrapped up their berth exactly one year after clinching a place in the 2013 playoffs.
“I think it establishes our presence in this league that we’re not going to go away,” Cole said.
The Pirates reacted to the final out on Tuesday with little emotion. Players exchanged high-fives in a line on the field before sharing hugs in front of their dugout. The emotions flowed with champagne and beer in the clubhouse.
Andrew McCutchen, the Pirates’ MVP contender, wore big ski goggles as he held a bottle of champagne in one hand and lit a big victory cigar.
McCutchen, who had two hits and scored the go-ahead run in the sixth, already had his focus on bigger goals.
“To celebrate is fun, but we’ve still got to take care of business,” he said.
Starling Marte gave Pittsburgh the lead with a sixth-inning double that drove in McCutchen. The Pirates, who are still chasing St. Louis for the NL Central title, have won 11 of 13.
Cole (11-5) trailed 2-0 after two innings but didn’t allow another runner through seven innings. That allowed the Pirates to rally against Alex Wood (11-11).
Travis Snider’s 12th homer tied the game in the fifth.
Cole allowed two runs and four hits with eight strikeouts.
Jared Hughes pitched a scoreless eighth. Left-hander Tony Watson gave up a one-out single to Phil Gosselin in the ninth, but he got Freddie Freeman to hit into a game-ending double play to earn his second save.
The Braves, who fired general manager Frank Wren on Monday, are 4-16 in September.
Braves manager Fredi Gonzalez said he admired the Pirates’ determined approach at the plate.
“These guys, they stick their nose in there offensively and they don’t give at-bats away. They put the ball in play and they get some results,” Gonzalez said.
Atlanta loaded the bases with no outs in the second but managed only one run when Andrelton Simmons grounded into a double play. Jason Heyward, who led off the inning with a walk, scored from third.
The double play was the key to Cole’s turnaround.
“Luckily, they made some good plays behind me,” Cole said.
“The double play was huge. We knew we were going to come back and score a few.
“It was about outs, and we turned a great double play. Then we just got in a rhythm and just kept going.”
DROUGHT-BREAKER:
The Braves scored a first-inning run for the first time since Aug. 27. Freeman’s double to the right-field wall drove in Gosselin. Freeman was thrown out trying to advance to third base.
The run ended a streak of 23 scoreless innings by Pirates starting pitchers.
THE CATCH:
Simmons added to his already lengthy list of defensive highlights at shortstop in the third inning. He made a leaping grab of Josh Harrison’s line drive before landing hard on his chest. He also banged his nose and face to the ground, but held onto the ball as Wood expressed astonishment on the mound.
TRAINER’S ROOM:
Pirates: RHP Charlie Morton has been shut down. He hasn’t pitched since he felt discomfort in his groin and midsection late in his five innings of work in a victory over Boston on Sept. 16.
Braves: LHP Mike Minor has left shoulder inflammation and has been shut down for the remainder of the season. RHP David Hale will take Minor’s spot in the rotation on Thursday against the Pirates.
UP NEXT:
Pirates: LHP Jeff Locke (7-5) is scheduled to face the Braves for the first time this season on Wednesday night. Locke received two no-decisions against Atlanta last season.
Braves: RHP Julio Teheran (13-13) will try to match his career high with his 14th win. Teheran was 14-8 for Atlanta in 2013.