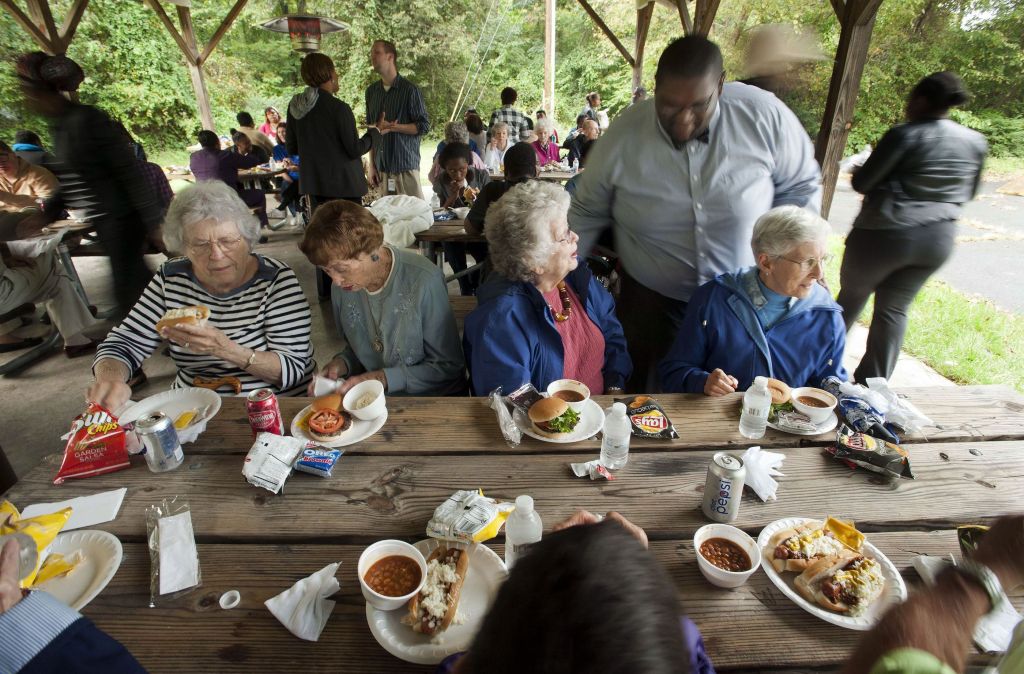 The rainy weather couldn’t dampen the good mood as residents of Trinity Oaks welcomed students and staff from Livingstone College to the neighborhood Tuesday afternoon at a cookout behind the former Holiday Inn on Jake Alexander Boulevard.
The retirement community — located off of Klumac Road not far from the rear of the hotel’s property — and the school have had a relationship since 2012 when Livingstone started its hospitality management and culinary arts programs. Students in the program can do internships at the community, which has about 350 residents and over 300 employees.
Now that Livingstone College is in the process of buying the hotel and turning it into a home for the two programs, the Trinity Oaks community thought the get together would be a great idea.
Shannon Davis, a student in the hospitality and culinary programs who is set to graduate next May, has worked at Trinity Oaks for a year doing food service and office work.
“I like it there, it’s a lot of fun,” she said.
Davis, from Charlotte, said she used to be a biology major but decided to switch to the two programs after they were added to the school’s curriculum.
“It’s something that I wanted to do with my life,” she said.
Timothy Miller, of Salisbury and a junior at Livingstone, said he decided to attend the college because he’s a “hometown boy.”
“I’ve always wanted to cook, so I decided since it’s right up the road I might as well come here,” he said.
Miller said his grandmother taught him to cook when he was 10 or 11 and that his passion is Southern style food. He said he’s been learning about fine-dining cuisines while in the program.
He said the connection with Trinity Oaks is a big plus for the college.
“This is a great thing, being able to see, like, how we can connect with them and how us being around them makes them smile and makes me smile. So I’m happy just being here,” he said.
Peggy and Richard Smith, who live at Trinity Oaks, enjoyed the food — hot dogs and hamburgers — and said the partnership with Livingstone is a positive thing for the community.
“I think it’s great,” Mr. Smith said.
Vivian Ray, director of the programs at Livingstone, said Trinity Oaks contacted them early on about building a partnership.
“They called us in 2012 and took on some of our students in internships. Ever since we’ve been here, they’ve had students as interns and have given scholarships.”
Bill Johnson, executive director of the Trinity Oaks campus, said the students in the programs are exactly the type of people he hires — chefs and program directors for events and trip planning.
Mike Walsh, also a director at Trinity Oaks, said as the baby-boomer generation retires, there will be more and more opportunities at places like Trinity Oaks for students earning degrees in hospitality management programs.
Over 70 Trinity Oaks residents and more than a dozen students from Livingstone attended the cookout.