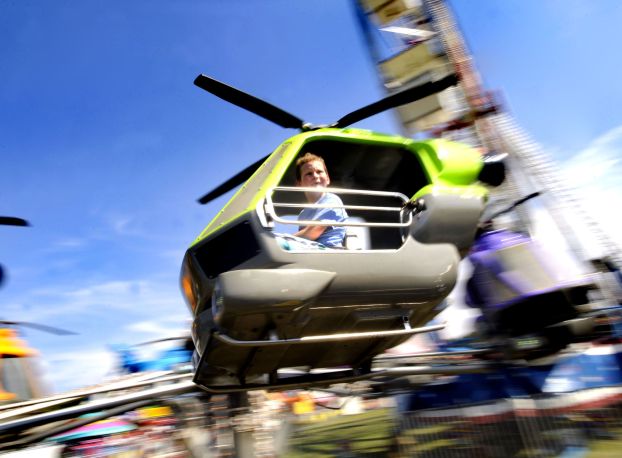 There are many reasons to look forward to September, and the Rowan County Agricultural and Industrial Fair is one of them.
For the first time, the fair is nine days long — tacking on an additional Friday and Saturday to the event’s span. In addition, a new company is providing the rides for this year’s fair.
This year, Dreamland Amusements took over the rides for the Rowan County Fair, and Fair Manager Johnny Love said he’s been very pleased.
“Everybody’s been commenting on how clean and nice the midway looks,” he said.
Opening night on Friday brought in roughly 3,000 attendees, according Love.
Compared to a typical opening night, which was historically held on a Monday, the crowd was “outstanding,” but compared to a typical Friday night, it was “OK,” he said.
He said the slightly lower attendance was probably due to the number of home football games around the area and because it’s the first year the fair has opened on a Friday.
Love expected Saturday’s attendance to be even higher though, with the beautiful weather and the Mud Bogg events.
He added that the weather is the “biggest obstacle” the fair faces.
Weather shouldn’t be a deterrent this year, however, with highs primarily in the mid- to upper 70s and very little chance of rain. Today is the exception, with the temperature supposed to hit 87, but with no chance of rain.
Mark Wilson and his son, Cohen, typically go to the fair in Cabarrus County, but decided to give the Rowan County Fair a try this year.
Although it’s a little bit smaller, Wilson said it wasn’t as crowded.
“We’ve just been riding the rides. It’s been fun,” he said. “The weather today’s been great.”
Cohen said his favorite ride was The Scrambler.
“It was crazy, but it felt like I was going to throw up the whole time,” he said.
“Only kids would think that was fun,” Mark Wilson said, laughing.
The pair planned to ride some more rides and indulge in the usual fair fare.
“I’m sure we’ll have a fried Oreo or something later,” he said.
Love said “fried everything” is the rage this year.
“My new favorite thing is the pumpkin funnel cake,” he said, adding that the cream cheese icing topping the treat made all the difference.
Love said there are 32 rides in operation and 22 food vendors this year.
But while the rides and food are incredibly popular, he is quick to say that they aren’t the purpose of the fair.
“The fair is more than a carnival coming to town, setting up rides and selling funnel cakes,” Love said.
The Rowan County Fair must adhere to specific state guidelines in order to be classified as an agricultural fair, including a number of educational agricultural exhibits.
East Rowan High School’s FFA students set up one such exhibit aimed toward young children.
“When they walk through the barnyard, they’re not supposed to touch the animals,” said one of the FFA teachers, Larry Shaver.
But East Rowan’s exhibit allows those children to have a hands-on agriculture experience.
Children had the opportunity to feed a pretend chicken and milk a pretend cow, as well as make Christmas ornaments from a tree trunk.
Elizabeth Roy said that although her two children were too small to ride any rides, they “had a ball” at the FFA Exhibit.
Anelise, 3, even said her favorite part of the fair was “when we fed the animals.”
“It’s a really great experience for the kids and I’m glad we’re doing it,” said East Rowan student Ashley Stubbs.
Love explained that it’s important for children to visit the agricultural exhibits to learn about where their food comes from.
“Now, most children do their farming at Food Lion,” he said.
The crop, flower, cooking and canning contests give “everyone in the county a chance to show off their talents and products,” he said.
The exhibits give people in the community the opportunity to meet and greet with local business people and politicians, he added.

Tom Smith can tell you how beautiful studio glass art is, but says you really have to see it to... read more